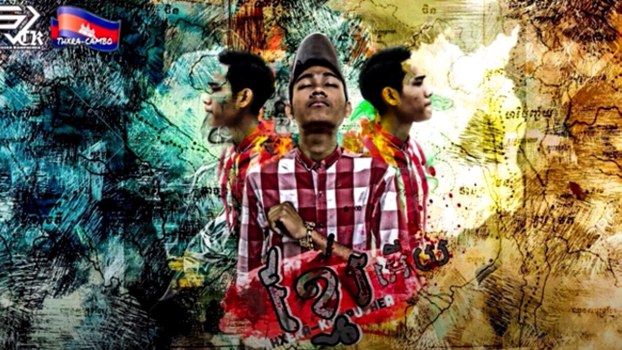 Long Puthera in a promotional photo posted to his YouTube page.

Two Cambodian rappers charged with ‘inciting’ public discontent over the 35-year rule of Prime Minister Hun Sen are ineligible for assistance from a legal team set up by the government to defend the poor, Cambodian sources told RFA Thursday.

Rappers Kea Sokun and Long Puthera were arrested this month in Siem Reap province after releasing songs criticizing the Cambodian government’s handling of its border dispute with Vietnam and suggesting that Hun Sen’s lack of leadership had led to Cambodia’s economic decline.

They are now being held awaiting trial on charges of “incitement to commit a felony or cause social unrest” under Article 495 of Cambodia’s Penal Code, Siem Reap Provincial Court spokesman Chhuon Sophana told RFA on Tuesday.

Cambodian NGOs have now sent or requested lawyers to defend the pair, with Am Sam Ath—deputy director of the rights group Licadho—saying the two rappers had only voiced their views and had not committed any crime.

“They had simply expressed their views through music, which was not a case of incitement. Their arrest is a violation of their basic rights,” he said.

Licadho is sending a lawyer to defend Kea Sokun, while the group Legal Aid of Cambodia will represent Long Puthera. Chan Chamroeun, Siem Reap provincial coordinator for the rights group Adhoc, said that he has also asked for lawyers who will request the pair be freed on bail.

Phum Bunphann, a Siem Reap lawyer working for Hun Sen’s team of legal volunteers, meanwhile told RFA on Thursday that he cannot defend the pair, saying he can provide services only “to the poor, to vulnerable women, and to women facing issues with the law.”

“We help the poor, but we can’t help everyone. Clients must meet certain criteria,” he said.

The rappers’ arrests—part of a sweep against youth activists, labor unionists, and environmentalists—come as Cambodian NGOs have voiced concern over inmates’ health amid a severe influenza outbreak in the country’s overcrowded prisons, with Adhoc member and former prisoner Ny Sokha urging Cambodia’s Ministry of Health to take immediate action to stop the further spread of the disease.

“The Prison Department should distance inmates from each other according to instructions from the Ministry of Health.  When I was in prison, we had skin diseases and could easily spread infections from one person to another,” he said.

Ministry of Health spokesman Ly Sovann confirmed to RFA that severe influenza is spreading rapidly in the prisons, while a Ministry statement on Sept. 16 said the flu is spreading in jails, pagodas, and villages in the provinces of Takeo, Preah Vihear, Koh Kong, Battambang, and Banteay Meanchey.

Though many monks fell ill last week, none tested positive for COVID-19, Sy Lovann said, adding that the flu is now spreading more quickly during the rainy season.

Nuth Savana, spokesman for the Prison Department, meanwhile said outbreaks have occurred in three prisons in Koh Kong, Kampong Cham, and Preah Vihear. He provided no details on how many inmates are now infected, but said that the department is working closely with health officials to prevent a further spread.

“We are handling this with the same procedures that we use for Covid-19. We have also given the prisoners pills, and they are getting better,” he said.

The Office of the U.N. High Commissioner for Human Rights Michelle Bachelet said last week that it had documented the arrest of 24 human rights campaigners since popular labor leader Rong Chhun, the president of the Cambodian Confederation of Unions, was taken into custody July 31, including eight in September alone.

The wave of arrests come three years after opposition Cambodia National Rescue Party (CNRP) president Kem Sokha’s September 2017 arrest over an alleged plot to overthrow the government with the help of Washington. Cambodia’s Supreme Court banned his party in November that year for its supposed role in the scheme.

The move to dissolve the CNRP marked the beginning of a wider crackdown by Hun Sen on the political opposition, NGOs, and the independent media that paved the way for his ruling Cambodian People’s Party (CPP) to win all 125 seats in parliament in the country’s July 2018 general election.