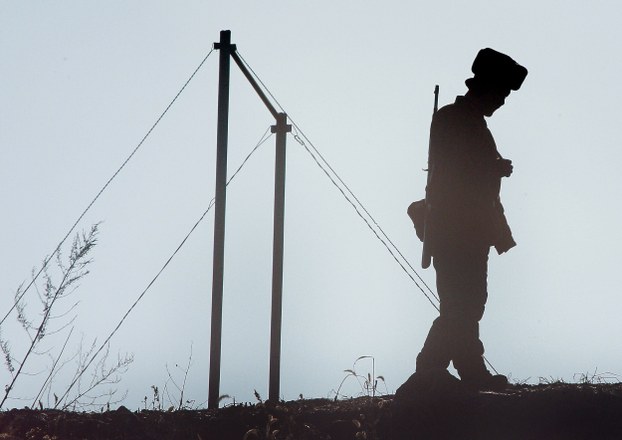 In this file photo, a North Korean soldier patrols along the bank of the Yalu River, near Sinuiju, opposite the Chinese border city of Dandong.

An exploding landmine killed a North Korean officer and maimed another soldier, the latest of dozens of casualties caused by mines laid to deter citizens from illegally crossing the country’s border with China, sources told RFA.

The two were inspecting landmines on Nov. 8 in an area near the border in Ryanggang province, in the northern part of the country, when a platoon leader stepped on a mine, a military source told RFA’s Korean Service Monday.

“He was a 28-year-old man named Choi, a platoon commander. He and his company went on a landmine inspection mission in their jurisdiction, but he accidentally stepped on a land mine and died,” the source said. It was the first casualty involving a commissioned officer since Pyongyang ordered the mining of the Chinese border early last month.

“Choi was killed on the spot, and the company commander who was with him was seriously injured by several shrapnel fragments. Currently he is undergoing treatment after emergency surgery at the county hospital in the region,” said the source.

The source said that Choi may have stepped on the mine unknowingly, because secret markings used by soldiers to identify their location may have been blown away by strong winds that are common at high altitudes in the more mountainous parts of Ryanggang.

RFA reported in late October that dozens of soldiers were injured in two separate incidents while laying mines along the 880-mile-long border, which has been closed since the onset of the coronavirus pandemic in January, with disastrous effects on the North Korean economy.

To prevent citizens from trying to escape harsh living conditions, Pyongyang had also beefed up the frontier guard corps with special forces and ordered soldiers to shoot anyone within a kilometer (0.6 miles) of the border regardless of their reason for being there, before deploying landmines to make the point clear.

“In just two months about a dozen soldiers in the area along the border of Ryanggang have been killed or maimed by exploding mines. We have no way of knowing how many more casualties will happen in the future,” the source said.

Another source, a Ryanggang resident, told RFA that a different accident had happened Nov. 2.

“Two border guards who were on night duty… were seriously injured in an explosion. They were returning from their shift when a mine buried about two meters (6.5 feet) away exploded into their arms and legs,” said the second source, who requested anonymity to speak freely.

The second source blamed the constant mishaps on mine-laying techniques. Soldiers lay the mines in a “saw-blade” or zig-zag pattern that makes it difficult to pinpoint their exact location—even for those who lay them.

“The border guards generally know where the mines are buried, but there are times when they forget because they suffer from cold and hunger as part of their tough military life. These types of accidents will continue in the future because the authorities rushed to lay the mines without considering the safety of the soldiers,” the source said.

“The authorities are using the coronavirus as an excuse to lay the mines, but they are in fact there to prevent people from escaping North Korea and it’s killing and maiming our young soldiers.”

You've got to be kidding! For so many years the Korean Workers Party has starved and abused its army. Now their soldiers are dying because they don't know enough about their own landmines. This would be laughable if it wasn't so hideous and obscene. But then these are the same people hiding behind their Chinese Masters seventy years ago.