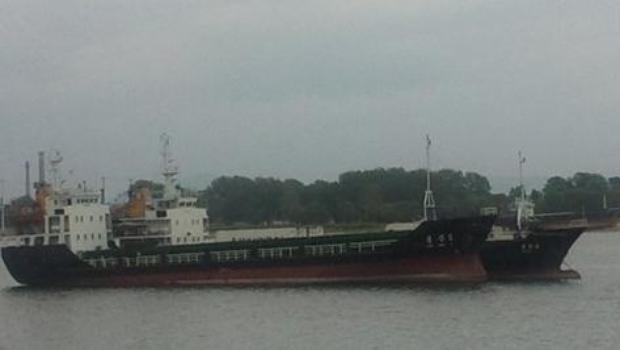 A North Korean ship anchored in the Yalu River in a file photo.
RFA

North Korean port cities are in trouble, with idle ships rusting in once bustling harbors and state-run trading companies reduced to catching octopuses for sale to China, brought down by double pinch of the coronavirus and international trade sanctions meant to deter Pyongyang’s nuclear ambitions, sources told RFA.

Trading companies were already struggling due to the sanctions, which forbid certain North Korean exports to China and were increasingly enforced by Beijing, but coronavirus delivered a knockout punch to the industry as Pyongyang and Beijing in January closed down their entire 880-mile border and suspended all trade to prevent the spread of the pandemic.

Sources told RFA’s Korean Service that the new normal of 2020 spells doom for the country’s port cities, where the trade companies make up a large part of local economies.

“State-owned trading companies, once famous for the entirety of our nation’s trade, are now on the verge of disintegration,” an official of North Hamgyong province, in the country’s northeast on the border with China told RFA Saturday.

“Their ships have been moored at port for so long that they are rusting to the point that the engines don’t function properly,” said the source, who requested anonymity to speak freely.

The source said that several large ships that are currently at port in the province’s capital Chongjin had in previous times been well known for their service to national trading firms.

“But after UN economic sanctions became stricter in 2017, these ships have not been able to set sail. Even the money-making venture of carrying cargo from other countries to evade the surveillance of international organizations has ceased, so the ships are just stuck in the port,” said the source.

The official said that prior to the coronavirus crisis, fishermen in small metal or wooden boats had been able to catch octopus and smuggle it into China around sanctions, but the pandemic put a stop to even that.

“Once the envy of every citizen, the trading companies have become ghosts of their former selves that can’t make any money,” the source said.

“If the UN economic sanctions continue and the coronavirus crisis does not come to an end, the trading companies that have managed to survive until now will just collapse,” said the source.

Another North Hamgyong official told RFA on the same day that the stoppage of maritime trade has crippled the economy of Chongjin, North Korea’s third largest city and home to more than 600,000.

“Employees of the trading companies used to live so well that it made ordinary citizens jealous. But now they are living hand to mouth,” said the second source, who requested anonymity for security reasons.

“The state trading companies, which once occupied all of Chongjin’s ports and monopolized the foreign currency-earning trade, will soon be doomed. Trade companies which had been barely getting by with octopus hunting, and even the military trading companies, are now dying because they have no work to do,” the second source said.

The second official said that employees of the provincial trade department or those who worked on the ships are suffering even more than the ordinary citizens of Chongjin.

“If sanctions against North Korea and the coronavirus crisis are not resolved soon, trade will not resume fast enough and the trading companies will have to close down and sell their ships as scrap metal,” said the second source.

“The people in Chongjin are looking at the rusting trade ships in Chongjin’s ports with anxious eyes. The city’s economy depends on those ships sailing and trading, but there is no sign that anything will happen soon.”

In July, the Korea Trade Investment Promotion Agency (Kotra) reported that North Korea’s trade volume had increased by slightly more than 14 percent year-on-year in 2019, the first increase since sanctions were imposed in 2017.

About 95 percent of North Korea’s trade volume, or roughly U.S. $3.1 billion, was with China. The report said the numbers are likely to decrease sharply in 2020 as a result of  the onset of the coronavirus.