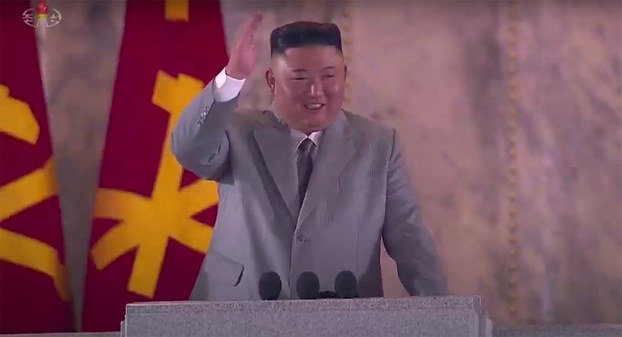 Saturday's event, which celebrated the 75th anniversary of the ruling Korean Workers’ Party, filled Kim Il Sung Square in the capital Pyongyang with thousands of goose-stepping troops, tanks, rocket launchers and ballistic missiles – including what is thought to be the North’s biggest-yet ICBM.

Appearing at midnight amid a massive parade staged in darkness and shown hours later on North Korean television, Kim, 36, appeared to choke back tears as he addressed “tremendous challenges” posed by the coronavirus pandemic and U.S.-led international sanctions over his nuclear and missile programs.

“Our people have placed trust, as high as the sky and as deep as the sea, in me, but I have failed to always live up to it satisfactorily. I am really sorry for that,” Kim said in remarks translated by South Korean media.

“Although I am entrusted with the important responsibility to lead this country upholding the cause of the great Comrades Kim Il Sung and Kim Jong Il thanks to the trust of all the people, my efforts and sincerity have not been sufficient enough to rid our people of the difficulties in their lives,” said Kim, referring to his grandfather and father, respectively.

“I am ashamed that I have never been able to repay you properly for your enormous trust,” Kim said. “My efforts and devotion were not sufficient to bring our people out of difficult livelihoods.”

Before Saturday’s parade, analysts said Pyongyang’s display of military power would serve to advertise strength to the outside world and offer a spectacle to gloss over economic difficulties brought on by the coronavirus pandemic and sanctions aimed at thwarting Pyongyang’s nuclear ambitions.

Residents of North Korea who spoke to RFA by telephone, however, were less than impressed by the parade and by Kim’s show of contrition. Some wondered why a proud country would mark the anniversary with “a sneaky military parade in the middle of the night.”

“The commemoration event began at midnight and ended at 3 am, and the residents who attended the event were exhausted and dissatisfied as they arrived at home only when the morning sun rose,” said a resident of Pyongyang.

“Since a month ago, residents have been preparing for the event in various districts of Pyongyang, but no one knew that the event would be held in the middle of the night,” the source told RFA’s Korean Service.

The Pyongyang resident said that while North Koreans often gripe about forced mobilization for public events, “there are more criticisms and ridicule for carrying out a sneaky military parade in the middle of the night.”

“Until now, we boasted that our military power is the best in the world and introduced various new weapons, but all that meaning disappeared by holding the event in the middle of the night,” the source added.

“The hot topic among the residents these days is the military parade that was held in the middle of the night,” added the Pyongyang resident.

“People are mockingly saying that that this would be the first time in the world to have a military parade in the middle of the night.”

RFA was unable to verify how widely such critical views are shared among North Koreans.

But an official in North Hamgyong province told RFA Sunday that holding the parade in the middle of the night had the effect of “increasing complaints from residents” and that Kim’s speech sparked mockery and disgust.

“In his speech following the military parade, the Highest Dignity was close to tears and admitted his inexperience,” the official said, using an honorific term for Kim.

“The Highest Dignity cried, saying, ‘Although I am entrusted with the important responsibility to lead this country, our people have not been able to get out of the difficulties in their lives because my efforts have not been sufficient,’” the official added.

“However, the residents feel disgust as if they are watching a three-generation play, saying that they have endured hunger while hearing the lies of three generations of Kim Il Sung, Kim Jong Il and Kim Jong Un that they work for the people,” the source said.

“The reason why we are poor is because of the supreme leadership’s refusal to reform and open up to maintain the dictatorship. What other reason is there?”

“Some residents are mocking the highest dignity, saying how urgent the highest dignity would be to act with tears. After ignoring the livelihood of the resident and devoted only to the development of weapons, now he is worried about the crisis of the system. He must have very complicated feelings,” the source said.

In Washington, Greg Scarlatoiu HRNK executive director of Human Rights in North Korea, called Kim’s display was “crocodile tears” by a third-generation ruler who hasn’t made changes to the policies of his grandfather and father. Kim Jong Un took power after his father Kim Jong Il died in 2011.