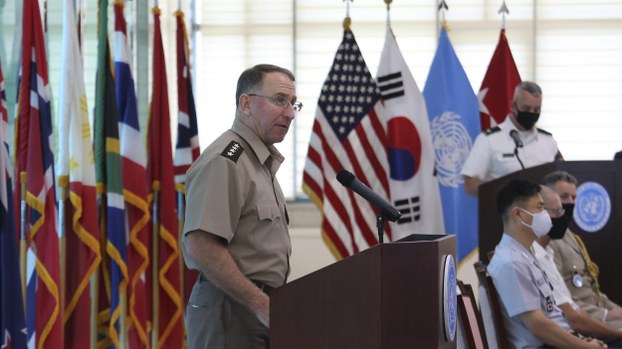 North Korea has set up a shoot-to-kill zone along its border with China to prevent citizens from crossing into China and bringing the coronavirus back with them should they return, the senior U.S. commander on the Korean peninsula said this week.

Gen. Robert Abrams, commander of the United States Forces Korea, told an online forum hosted by a Washington think tank Thursday that North Korea had taken drastic measures on its border to stop the COVID-19 pandemic from spreading among its malnourished population and decrepit healthcare system.

“North Korean smugglers have been trying to get across, and as a result, the regime issued out instructions. So now they’ve got an additional buffer zone, 1-2 kilometers up on the Chinese border,” he said.

“They’ve got North Korean SOF [special operations forces] out there manning these things, strike forces, they’ve got shoot to kill orders in place, and this is fundamentally about preventing COVID from getting into North Korea,” Abrams told the Washington-based Center for Strategic and International Studies on-line panel.

The severe border control policies described by Abrams, who commands the 28,500 troops based in South Korea under a longstanding defense treaty, are nearly identical to accounts shared with RFA’s Korea Service last month in a series of reports from North Korean sources along their country’s 1,420-km (880-mile) border with China.

On Aug. 26, RFA quoted sources in the North Korean military as saying that North Korea’s top brass had that day ordered military and police units to shoot on sight anyone found within 1,000 meters (0.6 miles) of the Chinese frontier in the four border provinces of North Hamgyong, North Pyongan, Chagang and Ryanggang.

A build-up of forces to fight the pandemic was also revealed in earlier RFA reports quoting sources in Ryanggang province that 1,500 Special Forces soldiers and border guards had been deployed in four layers along the Sino-Korean border to prevent illegal crossings during the pandemic and prevent smuggling by guards.

North Korea and China suspended all trade and closed their border at the beginning of the pandemic in January. But the frontier had remained porous, because North Korea’s nascent market economy depends on the smuggling of goods into and out of China.

Smugglers skirt U.S. and UN sanctions aimed at depriving Pyongyang of cash and resources that could be funneled into its nuclear and missile programs.

“With COVID-19, that has accelerated the effect of sanctions on North Korea,” said Abrams, who called the harsh border controls by Pyongyang “understandable” in view of their threadbare safety net for the population of 25.5 million people.

“They have a poor health system, 60 percent of their population is undernourished, they don’t have the medical capacity, and a very large outbreak could be devastating. So they are taking those matters into their hand,” the general said.

Abrams said that North Korea was not showing any signs of lashing out at South Korea or Japan, or launching other provocations, prior to the November 3 U.S. presidential election.

He said North Korea “is focused on getting their country back together,” referring to extensive damage caused by Typhoons Maysak and Haishen, which hammered North Korea’s eastern provinces one right after the other over the past week.

Abrams said the country’s current difficulties pale in comparison to the 1994-1998 North Korean famine that killed millions of North Koreans -- as much as 10 percent of its population by some estimates.

North Korea has still not reported a single confirmed case of the coronavirus. Though the country maintains outwardly that it is virus-free, the government has announced in public lectures to citizens that the virus was in April spreading in three areas of the country, including the capital Pyongyang.