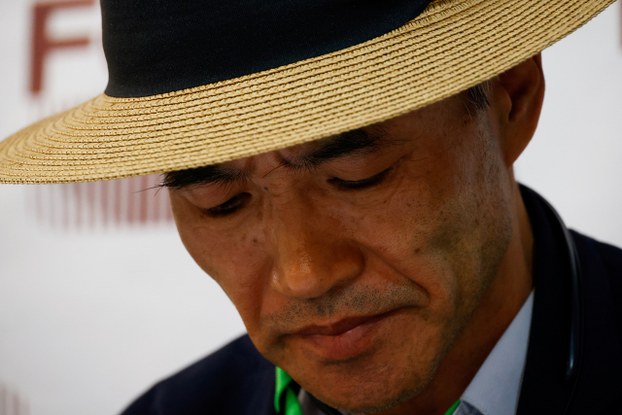 A South Korean fisheries official was shot and killed last month after North Korean soldiers found him drifting near the inter-Korean border in waters west of the Korean peninsula, a tragic incident that prompted North Korean Leader Kim Jong Un to issue a rare apology. Lee Dae-jun, 47 had gone missing on Sept. 21 from his post aboard a fisheries vessel sent out to monitor South Korean crab catches. He is believed to have drifted in the water for around 30 hours before the soldiers shot him, then incinerated his body in what the North says was a measure to prevent the spread of coronavirus. Following an investigation, South Korean authorities said it was likely that Lee was trying to defect to the North because he was in a bad financial situation. Since the incident, the late official’s older brother Lee Rae-jin told media that the family rejects the notion that he was fleeing to the North to get out of paying his debts. In addition, the family has requested an independent inquiry from the United Nations to clarify what happened on Sept. 22. RFA’s Korean Service interviewed Lee to find out how his family is dealing with the incident, and what particular issues they hope a UN inquiry will solve. The Q&A has been edited for length and clarity.

RFA: On September 21, your brother was reported missing, and on the 24th there was an announcement that he was shot dead by the North Korean troops. It was a major shock to the entire South Korean society, but I cannot imagine how it must have devastated your family. How are they doing?

Lee: My brother’s youngest child still believes her father is going to bring her a gift when he comes back home. The eldest child, a high school junior, is aware of the incident. Right now, his school is in the middle of an exams so he comes back home right after the morning classes but shortly after the incident he could not go to school at all in the beginning, and his friends have been talking about it behind his back.

RFA: How are your parents doing?

Lee: My father passed away earlier and my mother is still living but is suffering dementia.

RFA: That must be hard, but it is probably better that she does not know what happened to him.

Lee: I think it is a good thing. My brother often brought home flower crabs for her that he picked up at work. She keeps saying that his crabs are so tasty.

RFA: It must be painful to hear her say that.

Lee: Indeed. It has been four weeks since he went missing but it feels like 40 years.

RFA: I heard you visited the search site after your brother was reported missing on September 21. How was the search going?

Lee: At around 4:30 p.m. on the 21st, I was notified that he went missing. At 8 a.m. on the 22nd, I went to Yeonpyeong Island and at about 10 a.m., I boarded the ship where he was last seen. After checking my brother’s slippers and his bed, I joined the search. There was only one helicopter mobilized for the search. After the news of his death, they mobilized six helicopters. Up to 23 naval vessels participated in the search at one point but what is the use of bringing thousands of vessels when my brother is already dead?

RFA: In the morning of the 24th, the Joint Chiefs of Staff officially announced that the missing person was shot dead. Did you hear the news in the middle of the search?

Lee: I saw the news while on board. The announcement was very short. At that time, I did not carefully reconstruct what exactly had happened to him but thinking of it now, the primary cause of his death could have been cardiac arrest and drowning. Being shot could have been a secondary cause. The North Korean military officials were reported to have briefly interrogated my brother after which they dragged him by a rope for two hours. Drifting at sea for about 30 hours would leave anybody completely exhausted. Even a physically fit man would end up inhaling a lot of sea water if he was dragged around for over two hours. My brother must have been near the point of drowning because he was nearly fainting.

RFA: On the 24th, the announcement shocked the entire nation. On the 25th, Chairman Kim Jong Un sent out an apology. Some in South Korea say this is unusual. What do you make of it?

Lee: It is not unusual. It is just acknowledging that they handled it wrong. I accepted Kim’s statement partly because I am certain that my brother’s body is in North Korea and I want the North Korean regime to return his body. I am telling Chairman Kim to return my brother’s body to my family as soon as possible. 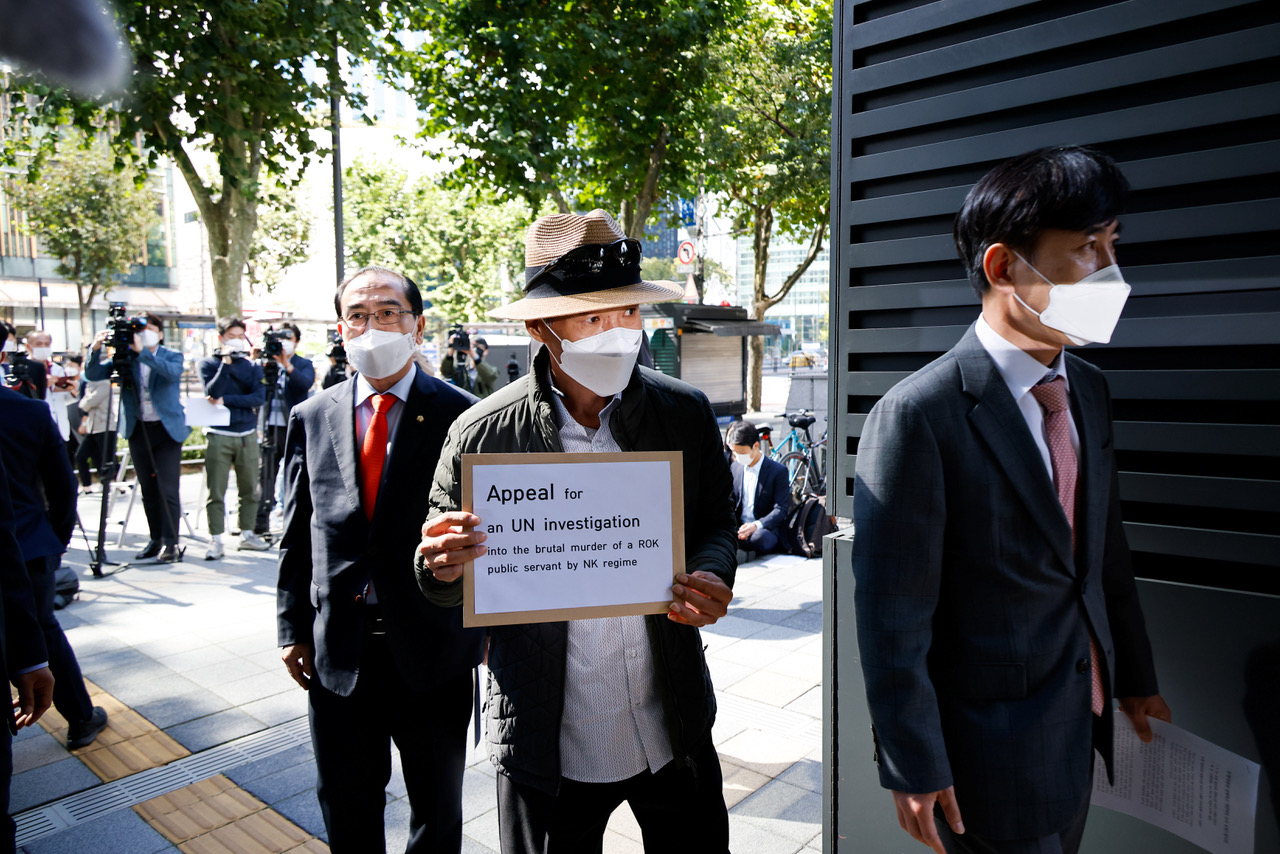 Lee Rae-jin, the older brother of a South Korean fisheries official shot dead by the North Korean military, and lawmakers get into the Office of the United Nations High Commissioner for Human Rights, with a document to appeal for a U.N. investigation on his brother’s death, in Seoul, South Korea, October 6, 2020. Reuters

RFA: You asked the United Nations to probe the case and also visited the UN Human Rights Office in Seoul. What role do you expect the UN and the international community to play?

Lee: I requested that the United Nations carry out a thorough and sincere investigation and a transparent disclosure of information. The United Nations has the role of a watchdog. Though it has limitations as to what it can do legally, the UN is, in a way, more effective and handles things faster than the South Korean government. They consider this issue a serious matter. First, I was trying to shed light on the North Korean regime’s outrageous actions that led to this atrocity. Now I am pressing the South Korean government and military to disclose all the relevant information.

RFA: In other interviews, members of your family said they wanted to prevent similar incidents from happening by raising awareness about the North Korean regime’s brutality.

Lee: The North Korean regime is atrocious because it dragged an unarmed civilian, a government official who was half-dead, by a rope for two hours and killed him in the end. They shot at my brother who was already nearly dead. This is something I cannot wrap my head around… This is a tragedy that should never be repeated. So, it is absolutely necessary to prevent something like this from happening through international cooperation in line with the global standards.

RFA: On October 15th, Tomas Ojea Quintana, the UN Special Rapporteur on the situation of human rights in North Korea, released a report that he will submit to the 75th UN General Assembly. The report says killing a civilian is against international human rights law and the North Korean regime should hold those responsible to account and compensate the bereaved family.

Lee: I sent the Special Rapporteur a report specifying possibilities of death by shooting as well as death by drowning and cardiac arrest. I said both possibilities should be investigated and requested holding people accountable, pushing for a joint investigation and prevention of similar incidents. I also sent a report specifying details of the case. I think the Special Rapporteur read all that and moved quickly. You are not supposed to kill a civilian even during wartime, but the North Korean regime killed my brother even though they knew who he was. South Korea is not free of responsibility because it was monitoring North Korea all along. So, I am asking the UN to look into this. I am asking why the North killed my brother and why the South did not protect him. Shouldn’t there be answers to these questions? I want to know the answers.

Lee: I am planning to work with many organizations including with the family of Otto Warmbier, [a U.S. citizen who in 2017 died shortly after his release for health reasons from a North Korean prison camp,] and their foundation. My brother was a government official in charge of maritime issues. Responding to this maritime incident, I also want to establish an organization to make appeals to the government to raise awareness in the international community. I believe through these efforts inter-Korean relations and the North Korean human rights situation will get better. Now smartphones are commonly used in North Korea, meaning there is more ability to receive information, and the economic situation has also improved compared to the past. But the regime’s order to kill an unarmed civilian… If that aspect of the society does not change and if we do not persuade them to change and allow them to be indifferent, North Korea might come under a greater pressure. If North Korea gets completely isolated from international society, the human rights situation there will only become more tragic.

RFA: I suspect you and your family have things to say to the North Korean regime.

Lee: I want to ask why they killed my brother under the pretext of the coronavirus, even though he identified himself. They should have sent him, a government official, back to his country for the sake of improving inter-Korean relations. If they are human beings, they should have at least rescued the person who was drifting at sea for 30 hours, help him get warm, and give him food and water. I strongly protest North Korea for not doing so. Also, if they have my brother’s body or his remains, I hope they will give them back for humanitarian reasons.

RFA: Four weeks have passed after your brother went missing. What is your family’s wish right now?

Lee: I hope we could recover my brother’ remains so that we can hold a funeral for him. How could we have expected this to happen? I still can’t believe it happened. My cellphone still has a record of calls between my brother and me. I can’t bring myself to erase this record. I love my brother that much.