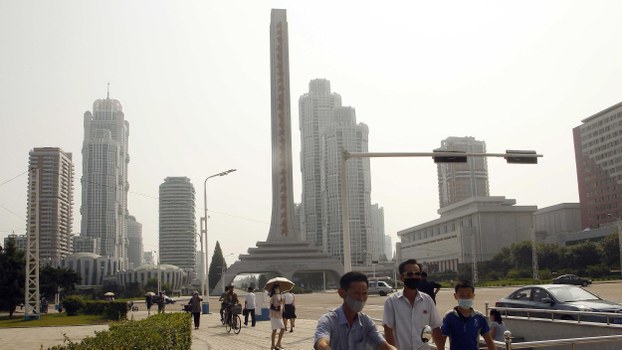 Many North Korean residents are not buying their government’s explanation that supreme leader Kim Jong Un’s decision to declare a coronavirus “national maximum emergency” was driven by an infected refugee who recently returned from South Korea, local sources told RFA.

Following the man’s return to the area near his hometown Kaesong on July 19, the government shut the city down completely, with the state-run Rodong Sinmun newspaper saying that authorities had declared a national maximum emergency over concerns that the man had brought the coronavirus with him.

“Some conscious residents point out that the authorities are trying to put the blame for the failure of the coronavirus quarantine on a single North Korean refugee who has re-entered North Korea,” said the source, a resident of North Hamgyong province.

“The residents are wondering how the background of this decision could [possibly] be due to the symptoms of the returned North Korean refugee,” the source, who requested anonymity to speak freely, told RFA’s Korean Service this week.

“They do not believe the announcement that [authorities] suspected coronavirus symptoms, which [officially] had not been seen in people returning from countries like China and Russia, but were suddenly found in one North Korean refugee,” the source said.

North Korean assertions to the international community that it was coronavirus-free had raised doubts in view of stringent measures it had imposed since late winter to combat the pandemic.

The country closed border trade with China, locked down entire counties and cities after public lectures told citizens where the virus was said to have been spreading, and fired senior health officials for poor quarantine enforcement.

The source noted that Pyongyang is in the midst of a high-level campaign to smear the reputations of people who have left North Korea to settle abroad, mainly in rival South Korea.

“In June, the authorities lashed out at the North Korean refugees in South Korea because they distributed propaganda leaflets [by balloon into North Korean territory],” the source said.

North Korea blew up an inter-Korean liaison office in Kaesong and cut off official communications with South Korea, citing Seoul’s inability to rein in civic groups sending the balloons to the North.

“So now that’s why they are making all this fuss about one returned North Korean escapee,” said the source.

A second source, a resident of Ryanggang province on the border with China, described the terms of the maximum national emergency.

“What I know is that the city of Kaesong is completely closed, so everyone is prohibited from entering the city,” the second source said.

“The change to maximum emergency was decided by the Highest Dignity and the tasks to be carried out were presented to the party, labor organizations, government agencies, security agencies, quarantine and health agencies,” said the second source, using an honorific term to refer to Kim Jong Un.

“[They] blocked the movement of each province, city, county, and district, saying that a new danger was introduced that could result in a fatally devastating disaster for our people,” said the second source.

The second source said that most residents did not accept the government’s explanation, because they were well aware that COVID-19 was likely coming in across the long Sino-Korean border, which remains porous although officially closed.

“Most residents are puzzled by the fact that the authorities have been silent on the numerous cases of suspected coronavirus in people near the borders of China and Russia, yet they are making a big deal out of a single returnee to Kaesong,” the second source said.

“They say the authorities want to shirk responsibility for their failure in the coronavirus quarantine by blaming the returnee, and still have an excuse to tighten control over the movement of residents.”

South Korea confirmed Monday that a 24-year-old refugee from North Korea surnamed Kim, had on July 19 swum from South to North following the reverse route he had originally taken to escape from North to South in 2017.

Authorities said Kim had never been tested for coronavirus, and South Korea’s robust contact tracing system did not reveal he had been in proximity to anyone who had tested positive. Two people he had frequent contact with were tested and the results were negative.