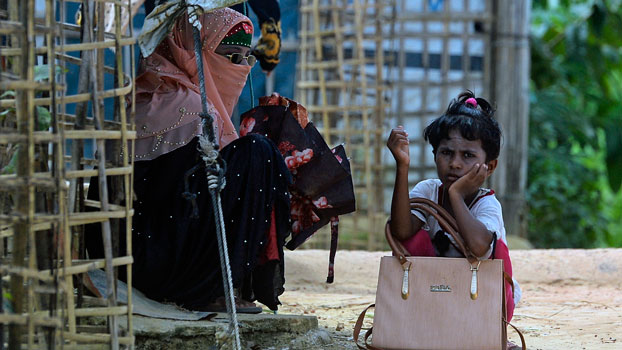 Myanmar is not ready to join Bangladesh and China in talks on the repatriation of some 740,000 Rohingya refugees from Bangladeshi camps, a senior Naypyidaw diplomat said Tuesday, after Dhaka expressed hope for movement on the dispute following Myanmar’s elections.

In August 2017, Myanmar’s military responded to attacks on border guard posts by extremists with a campaign of indiscriminate killings, mass rape, torture, and village burnings — driving 740,000 Rohingya across the border and into Bangladesh where they have lived for three years in cramped displacement camps.

Myanmar and Bangladesh have held talks since November 2017 on returning the refugees and struck agreements, going as far as exchanging lists of eligible returnees. But the plans never got off the ground — mainly because the Rohingya refuse to return to face systematic discrimination and violence, as they have seen little action from Myanmar to address those issues.

The involvement of China, which shares a border with Myanmar and has a major pipeline and port project in conflict-torn Rakhine state, stems from Chinese Foreign Minister Wang Yi’s meetings in 2018 with his Bangladesh and Myanmar counterparts in Beijing and at the United Nations in New York that also produced agreements on repatriating the Muslim minority to mostly Buddhist Myanmar.

On Tuesday, however, citing the coronavirus pandemic, Aung Ko, director general of Myanmar’s Ministry of Foreign Affairs, told RFA that officials had no communications with Bangladesh on refugee repatriation and had no plans to hold new rounds of repatriation talks.

“We haven’t planned anything yet,” he said. “So far, the situation has been affected by the COVID-19 pandemic. We need to keep this in mind.”

Aung Ko’s statement followed a remark by Bangladeshi Foreign Minister AK Abdul Momen told Bangladesh’s national news agency BSS that Dhaka would push the new government to set a date for beginning the repatriations, with the help of countries friendly to Bangladesh.

“Our friends like China, Japan, the European Union the United Kingdom told us that they would help us so that Myanmar takes initiative in this regard [Rohingya repatriation],” BSS quoted the minister as saying.

Momen expressed optimism over the resumption of meetings on Rohingya refugee repatriation once a new Myanmar government is formed, in comments to the Dhaka Tribune on Nov. 9, a day after a landslide victory for Aung San Suu Kyi’s National League for Democracy (NLD) gave her a second five-year mandate.

Although the mass expulsion of Muslims marred the second half of Aung San Suu Kyi’s first five-year term, shredding her international reputation and drawing war crimes charges, it did not figure in the Nov. 8 election campaign in a country where the Rohingya are denigrated as illegal immigrants from Bangladesh.

Aung Ko said the two sides have regular communications, but they focus on work procedures required by bilateral agreements.

“Currently, we cannot hold any meetings since we cannot go outside the country, except by relief flight,” he said. “There are several limitations for now.”

With a resurgence of COVID-19 infection rates since mid-August, Myanmar has in place strict restrictions on travel and public gatherings as measures to prevent the spread of the virus.

Last month, Turkey’s Anadolou Agency reported that Myanmar had told China that it was willing to take back Rohingya refugees living in Bangladesh, citing a Bangladeshi Foreign Ministry statement that said Wang Yi conveyed the information to Momen in a phone call.

“Chinese Foreign Minister and State Councilor Wang Yi said that recently Myanmar had once again assured that the displaced Rohingya would be returned to Myanmar,” said the statement issued on Oct. 23, according to the state-run news agency.

On Tuesday, RFA could not reach the Chinese Embassy in Myanmar for comment on the possibility of the resumption of the tripartite meetings.

Myanmar has accepted back nearly 500 Rohingya refugees who have returned on their own since 2018 via a repatriation center in Maungdaw township’s Nga Khu Ya village.

Rohingya refugees and activists say that repatriations hinge on whether the demands of the Rohingya for full citizenship and other rights are met.

“The main issue is our citizenship,” said Aung Myaing, a Rohingya refugee from the Kutuplaung refugee camp in Bangladesh’s Cox’s Bazar district, adding that many already hold ID cards from the Immigrations Department.

Rohingya refugees fear that if they return, the Myanmar government will issue National Verifications Cards (NVCs) to them as a precursor to applying for citizenship for those who qualify, but that the cards will define them as stateless.

“One of the biggest challenges is concern over the National Verification Cards,” Muslim community leader Aye Lwin said. “They fear they will be officially defined as stateless if they take the NVCs.”

“They think that if the NVC cards are issued to everyone who shows up at the border regardless of the armed conflict or the COVID-19 pandemic, then they might lose their citizenship rights,” said Aye Lwin, a member of a commission led by former U.N. Secretary General Kofi Annan and tasked with finding solutions to the ethnic conflicts in Rakhine.

“This is the greatest barrier. The new government needs to handle this issue with caution,” he said.

In December 2019, the Myanmar government told Rohingya refugees that it would issue national ID cards to returning refugees whose parents both had the cards themselves, while others would be given NVCs.

Rohingya refugees have demanded that Myanmar recognize them as one of the country’s official ethnic groups and issue them all national ID cards. Up to now, the government has considered the Rohingya illegal immigrants from Bangladesh and has excluded them from the list of 135 recognized ethnic groups.

But a government official told RFA on Dec. 22, 2019, that such a demand could not be met and that it only would be possible to issue national ID cards to all Rohingya refugees if the country’s 1982 Citizenship Law was amended.

With the NLD’s recent landslide win in the elections, the next government will be well-positioned to amend the law, said rights activist Nickey Diamond from Southeast Asia-based Fortify Rights.

“But the NLD’s intention to amend the law remains ambiguous,” he said, adding that it would be possible for the government to retain the 1982 Citizenship Law while it faces trials on genocide-related charges over the 2017 violence against the Rohingya at the International Court of Justice and the International Criminal Court.

Aung San Suu Kyi has repeatedly defended the military’s actions against the Rohingya and made little effort to kick-start the repatriation process during her first five-year term. She follows government practice and does not utter the term “Rohingya” in public.

“We will wait and see if the NLD will stick to the headstrong policies of denying the refugees the rights they deserve,” Diamond said.