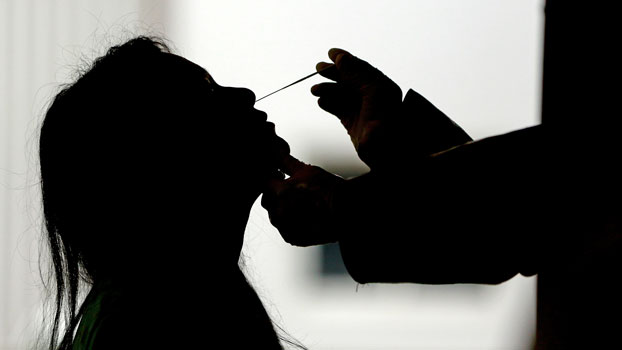 A medical staffer takes a swab sample from a Myanmar government employee to test for COVID-19 at a quarantine facility at Hlaing University in Yangon, July 16, 2020.
AFP

Myanmar’s second wave of coronavirus may have been triggered by “returnees” from neighboring Bangladesh, who brought the illness back with them when they illegally entered Rakhine state, which is now a COVID-19 hotspot, according to a senior government health official.

But other experts say the evidence remains inconclusive, and the quest to find out the source of infections is hampered by limited contact tracing, poor compliance with coronavirus countermeasures and porous borders not with only Bangladesh, but also with Thailand, China, and India.

Like continental Southeast Asian neighbors Cambodia, Laos, Thailand, and Vietnam, Myanmar largely avoided widespread COVID-19 infections that spread around the globe through the first half of the year. But the country of 54 million people has seen a deadly return of the virus since mid-August.

“It is possible that the second wave started from Rakhine,” Dr. Khin Khin Gyi, director of the Central Contagious Disease Prevention and Eradication Department at the Ministry of Health and Sports, told RFA’s Myanmar Service in a telephone interview. Rakhine has become a hotspot for the virus, along with the Yangon region.

“The percentage of likely infections from those who had come in illegally from Bangladesh is high,” she said. “The infections spread from there into Rakhine, and then went to Yangon and various other places in Myanmar by plane.”

Khin Khin Gyi, like other government officials, uses the term “returnees” when referring to Rohingya from Rakhine state, because officially the Muslim ethnic minority doesn’t exist. Mention of the term is so widely avoided that national leader Aung San Suu Kyi’s speech defending her country’s military against allegations of genocide at the International Court of Justice (ICJ) last year did not contain the word “Rohingya.”

The hundreds of thousands of Rohingya who live in Rakhine are considered illegal immigrants from Bangladesh and are denied Myanmar citizenship.

Three years ago, Myanmar forces led a brutal crackdown on Rohingya communities in the state’s northern townships, leaving thousands dead and driving more than 740,000 others to flee to Bangladesh, where they live in sprawling refugee camps.

Though most Rohingya refugees in Bangladesh say that they do not want to return to Myanmar absent policy changes to address rampant discrimination and persecution, a few dozen have trickled back over the border without going through official repatriation procedures.

Myanmar has the fourth-highest number of confirmed COVID-19 cases among the 10 member states of the Association of Southeast Asian Nations (ASEAN), behind the Philippines, Indonesia, and Singapore.

As of Tuesday, Myanmar registered 20,033 confirmed coronavirus cases, including 1,252 new ones — the highest daily increase since the first case was detected on March 23. There have been 471 related fatalities and 5,782 recoveries.

When the number of infections began to rise in Bangladesh earlier this year, residents on Myanmar’s side of the border in Rakhine state requested that officials stop illegal returnees and cross-border trade between the Teknaf area of Cox’s Bazar district and Maungdaw township. 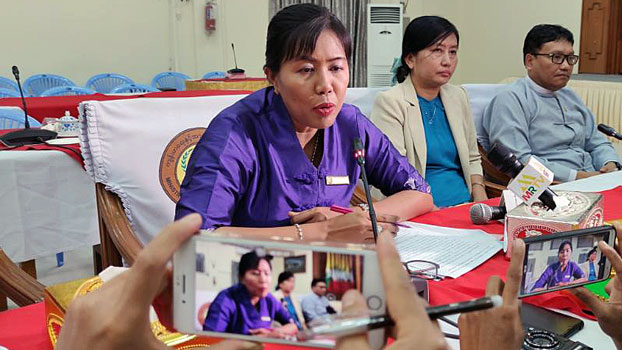 On Oct. 1, Maungdaw township administrator Aung Soe told RFA that trade had remained open until mid-year out of economic necessity, and that about 150 Rohingyas from the refugee camps returned on their own between April and June.

Eight of them were found to be infected with the coronavirus, he said. Three other Rohingyas involved in the border trade with Teknaf also tested positive.

Myanmar’s Health Ministry reported that 14 people who traveled to Bangladesh during the months of June, July, and August all later tested positive for the virus.

Dr. Sai Win Zaw Hlaing, director of Rakhine state’s Public Health Department, said it was difficult to verify whether the second wave of COVID-19 came from Bangladesh and spread from Rakhine state to other parts of Myanmar.

“We cannot say definitely that there’s a connection between those who were found to be infected in Maungdaw and those here [in Sittwe],” he said. “There are flights from Yangon [to Rakhine state], and there are those who come from various regions by car [to Rakhine’s capital] as well.”

“There are also those who have returned from Bangladesh on boats that operate illegally,” he added. The government has cut off boat traffic as a COVID-19 containment measure.

In mid-July, infections were detected in the Maungdaw-Buthidaung area at the same time that COVID-19 case numbers were growing in the Yangon region. As of Monday, the Yangon region recorded nearly 14, 600 confirmed coronavirus cases.

One COVID-19 patient at Waibargi Hospital, a specialist infectious disease hospital in Yangon, had a history of travel to Bangladesh. On July 1, four people in Yangon, who all had traveled to Middle Eastern countries, were found to be COVID-positive. Others who had returned from other countries tested positive for the virus as well.

During the second week of August, a woman who worked at a bank in Sittwe came down with the virus, though she reported having no contact with infected people. She then passed on the virus on to another person.

According to a Health Ministry announcement on Aug. 26, approximately 20 people caught the virus from a COVID patient in Sittwe. Those figures did not include the number of people who later were infected by the group of 20.

Sai Win Zaw Hlaing said the bank employee’s infection period had been long, so that it was difficult to determine the origin of the illness, though she took a plane to Kyaukphyu in Rakhine state on July 30 and returned to Sittwe on Aug. 2.

The woman began showing symptoms on Aug. 14, and she was confirmed as having COVID-19 two days later, he said.

“It’s possible that it was brought from Kyaukphyu or it could have been that the infection was transmitted from those who had returned from Yangon on the flight,” he said. “The person went to work in the bank on Aug. 4, so it also could have been from a person who came into the bank.” 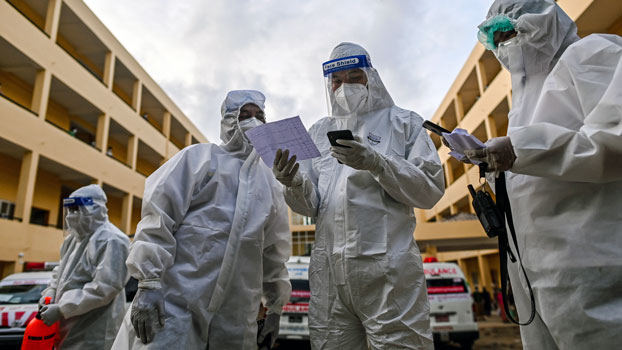 Rights activist Nickey Diamond from Southeast Asia-based Fortify Rights told RFA that health officials should present evidence if they are certain that the virus was spread by Rohingyas who returned from Bangladesh.

“If you want to talk about the concept that the infection spread because someone has returned from Bangladesh, then the main thing is the evidence,” he said. “If you are certain about it, do you have any evidence of research on the spread of the infection? If you do, then you need to make an official announcement.”

In mid-August, the Health Ministry asked about 5,000 people who had traveled to Rakhine by plane to get tested for the virus. About 2,000 of them did not respond to the request.

In September, the number of confirmed COVID cases across Myanmar grew to 500-800 daily, with the majority of cases in Yangon. About 70 percent of those infected did not experience virus symptoms, the Health Ministry said.

In the interview with RFA, Khin Khin Gyi blamed the rapid spread of the coronavirus on the carelessness of the public on account of incomplete and fake news.

But Diamond said such carelessness reflected the behavior of Myanmar’s leaders.

“Actually, what we noticed was that our country did not suffer badly during the first wave,” he said. “The country’s leader Daw [honorific] Aung San Suu Kyi herself would wear a mask, and then not wear a mask, at many public rallies.”

“Because she did that, people became very careless,” he said.

With the coronavirus spreading to more than 90 percent of Myanmar, including all regions and states, except for Kayah state on the border with Thailand, there are now more than 10,000 patients under observation and over 100,000 residing temporarily in monitoring centers, Khin Khin Gyi said.

People who have symptoms of COVID-19 are avoiding hospital and clinic visits and treating themselves at home, she added.

The lack of contact tracing has been a key factor that has facilitated the spread of the virus, said Dr. Saw Naing, a volunteer physician at a fever clinic in South Okkalapa township in Yangon. The government has set up fever clinics to treat those with the COVID-19 virus and people suspected of contracting it.

Saw Naing cited the case of a betel nut shop owner in Yangon who contracted COVID-19.

“There was no way for us to know how many people came to the betel nut shop, so there was no way to trace the virus,” he said. “Since nothing could be done, we could only close the shop.” 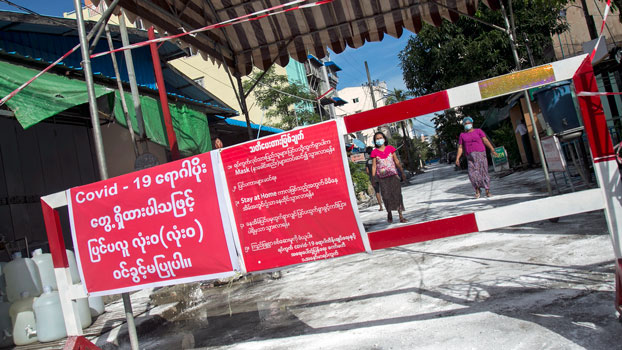 People walk towards a barrier blocking access to minor roads with a sign urging residents to stay at home due to a surge in the number of cases of the coronavirus in Myanmar's commercial city Yangon, Sept. 11, 2020. Credit: AFP

In response to the surge, officials in the hardest-hit regions and states have imposed lockdowns, stay-at-home orders, and travel restrictions, and have set up additional COVID-19 testing and treatment centers and quarantine facilities.

Medical workers were mobilized and sent to hospitals and clinics in Yangon and Rakhine state, and the central government has allocated more than 1 trillion kyats (U.S. $747.5 million) to fight the spread of the virus.

Government officials in Yangon now have extended stay-at-home orders until the end of October because infection rates there have not yet dropped.

Some doctors, including Khin Khin Gyi, believe that if people remain at home, infection rates will drop at the end of the month.

But Aung Thu Nyein, communications director at the Institute for Strategic Policy-Myanmar, a Yangon-based independent think tank that promotes democracy and good governance, said the rising infection rates could be attributed to many factors.

“We’ve got more migrant workers than other country in the region,” he said. “The border is porous. Many people are returning from Thailand and China.

“Lately, there have been assumptions that the outbreak in the western part of the country is responsible for the second wave of infections,” he added. “Because of the nature of the country [with so many returning migrants], it is almost impossible to contain this pandemic.”

Khin Khin Gyi dismissed the possibility that responsibility for the coronavirus resurgence that began on Aug. 16 could lie with the tens of thousands of Myanmar migrant workers who returned home after losing their farm and factory jobs in China, Thailand, and India. Most of those workers returned in the months following the pandemic’s outbreak early this year.

“If it was from them that the disease had spread, then there would not be any infections from them by now,” she said. “There is not much chance of people having gotten it from them.”

Reported by Moe Myint and Nay Myo Htun for RFA’s Myanmar Service. Translated by Than Than Win and Ye Kaung Myint Maung. Written in English by Roseanne Gerin.

CORRECTION: An earlier version of this story incorrectly reported that there were nearly 1,500 COVID-related deaths in Bangladesh.