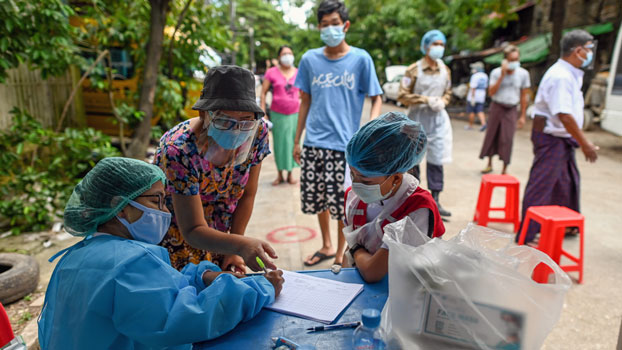 Health care workers register Myanmar residents during a medical screening and contact-tracing campaign to control the spread of COVID-19, in Yangon, Sept. 9, 2020.
AFP

A resurgence of coronavirus infections in Myanmar has been lethal for younger people in the Southeast Asian country, with 40 percent of those under the age of 60 who have tested positive dying from the highly contagious respiratory illness, a government health official said Thursday.

On Thursday, Myanmar registered 4,043 COVID-19 cases, with 222 new infections, and 60 deaths, including 20 new fatalities. The country of 54 million people has had 944 recoveries so far.

Myanmar, which shares a long land border with China, initially had a low number of confirmed infections and single-digit deaths from March until mid-August, when the number of COVID-19 cases began to skyrocket.

“In the first wave of infections, there were only six deaths, and 80 percent of them were people over 60 years old,” said Dr. Khin Khin Gyi, director of the Central Contagious Disease Prevention and Eradication Department at the Ministry of Health and Sports.

“In the second wave, 60 percent of deaths have been people above the age of 60,” she said. “The proportion of people under 60 who have died of the respiratory illness has increased.”

Infection rates have accelerated again since Sept. 2, despite stay-at-home orders, lockdowns, and mandatory quarantines for those traveling to other states and regions within the country as well as for those returning to Myanmar from abroad.

The number of people who have tested positive for the virus has risen in multiples of tens in less than a month amid the second wave, Khin Khin Gyi said.

All states and regions in Myanmar, except Kayah state in the eastern part of the country, have coronavirus-positive patients, with the majority of them and the highest number of deaths in Yangon region and Rakhine state in the west.

“This is the new strain of the virus,” Khin Khin Gyi said. “The infection rate is much higher.”

Most of those who are dying of COVID-19 are people with preexisting health conditions, as well as senior citizens, she added.

Many people who did not adhere to rules for preventing the spread of COVID-19, such as wearing facial masks and practicing social distancing in public places during the first wave, have contributed to the recent steep infection rate, said Dr. Okka Kyi Win, a general practitioner and resident of Yangon.

“People were speculating that the virus had weakened after the first wave, but there is no proof of that,” he said.

Journalist Nay Min Kha, who tested positive for the coronavirus and is staying temporarily in a quarantine center in Yangon, said to the best of his knowledge he never came into direct contact with others who tested positive when he was reporting on the spread of the virus and visiting streets and quarters under lockdown.

“I don’t know for sure where I got it,” he told RFA. “There are many people I had interacted with who might have been carrying the virus without showing any symptoms, because I had never interacted with any confirmed patients.”

Phyo Min Thein, chief minister of Yangon region, said Tuesday that he is confident that the infection rate will be under control within 20 days. 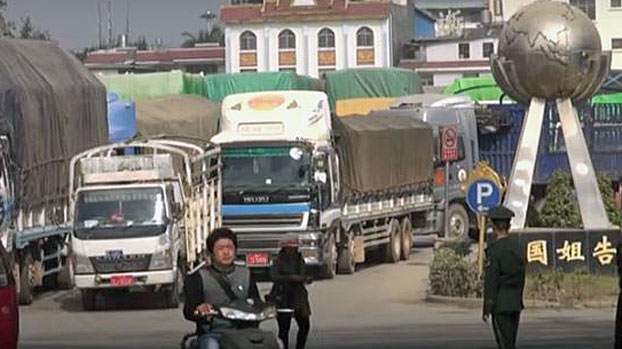 Myanmar traders who work in a trading hub along the China-Myanmar border in northern Shan state, meanwhile, expressed concern on Thursday that their business would take a hit due to tighter restrictions on cross-border cargo traffic after two Myanmar citizens tested positive for COVID-19.

Chinese authorities locked down the border town of Ruili in southwestern Yunnan province, across the Shweli River from the Myanmar town of Muse, after city administrators announced that the pair of coronavirus-positive migrants, both women, had used unofficial routes to illegally cross between Myanmar and China.

“Only some cargo trucks already loaded in Jiegao on the China side of the border have been allowed to travel to Myanmar,” he said.

“At least 90 percent of regular cargo traffic has been stopped,” he added.

Tin Ye Win, an officer at the 105-mile border trade zone in Muse township, said that the current lockdown only affects the area between Ruili and Jiegao.

“Border traffic has not been completely closed off,” he said, adding that cargo traffic is still going into Jiegao, and trucks already in Jiegao are still entering Myanmar.

“[But] it could be problem that cargo is in short supply in Jiegao and the lockdown in Ruili remains in effect,” he said. “It depends on how long the lockdown lasts.”

Border trade between China and Myanmar via Muse usually accounts for up to U.S. $15 million a day, but now it only amounts to U.S.$7-8 million because of COVID-19 restrictions, according to Myanmar authorities.

Earlier this year, Yunnan province officials decided to close the border with Myanmar, forbidding all vehicles except trucks to cross, and to only allow in Myanmar nationals whose identity cards specified that they were from the border town of Muse.

Chinese authorities also had restricted their drivers from entering Myanmar and required Myanmar traders in northern Shan state to pay Chinese drivers to transport truckloads of rice and fruit from border crossings to local cargo facilities.

The resumption of normal border trade now depends on the results of health screenings in Ruili, where local authorities screened up to a 100,000 people for COVID-19 on Wednesday alone, traders said.

Chinese authorities “are screening for the virus everywhere,” said a Myanmar citizen who lives on the China side of the border, but did not want to be identified by name.