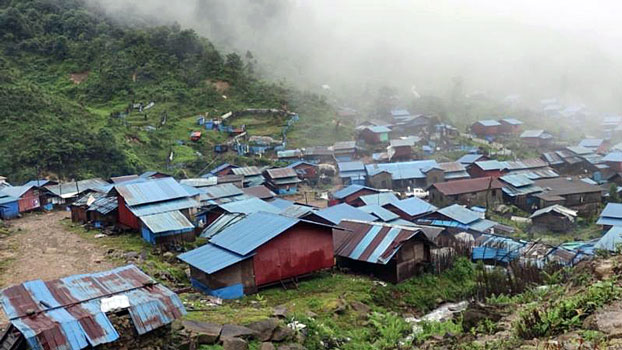 Makeshift shelters are crowded together on a hillside at an IDP camp in the town of Sadung, Waingmaw township, northern Myanmar's Kachin state, Aug. 13, 2020.
RFA video screenshot

More than 400 people living in a displaced persons camp in a remote border town under the control of a rebel army in northern Myanmar’s Kachin state are facing a severe food shortage because government forces have cut off supplies to the insurgent-controlled area, a local Kachin humanitarian leader said Friday.

The plight of the internally displaced persons (IDPs), who have been living for nine years at a camp in Kachin’s Waingmaw township, is further complicated by the shutdown of border crossings from China as a measure to prevent the spread of the coronoavirus, which has flared up in parts of Myanmar.

The area is under the control of the Kachin Independence Army (KIA), which has engaged in periodic clashes with Myanmar forces since a bilateral cease-fire between the two sides broke down in 2011. The KIA has not signed Myanmar’s nationwide cease-fire agreement (NCA), inked by 10 other ethnic armies since October 2015.

“The government army is restricting food supplies because it [the camp] is situated in the rebel KIA-controlled territory,” said Dr. Hkalam Samson, chairman of the Kachin Humanitarian Concern Committee (KHCC), which provides assistance to IDPs in the state.

“Though the military allows people to cross the border, it is difficult to transport food supplies,” he said.

RFA was unable to reach military spokesmen for comment.

The IDPs who live in the camp in the town of Sadung have depended on the Karuna Mission Social Solidarity (KMSS), a Yangon-based charity network operated by the Catholic Church, to provide them with basic necessities for the past nine years.

The KMSS supplies rice to the IDPs, but has no funds to buy more nutritious food like vegetables and meat for them, said the organization's Maran Gwan Jar Naw.

“The camp is far from the [nearest] market, and items at the shop in the camp are very expensive,” he told RFA’s Myanmar Service.

The IDPs themselves have no income and no place to earn money, especially amid the COVID-19 pandemic, he said.

“They only have rice, but [we] need nutritious food for the children,” Maran Gwan Jar Naw said.

Given the town’s hard-to-reach location on a mountain range, the IDPs have had to rely on food rations coming from China.

The Myanmar military, however, has prohibited the delivery of food to the camp via the main thoroughfare, Sadung Road, to enforce COVID-19 border restrictions and lockdowns.

“After the coronavirus spread in China, roads were blocked and vendors from the China side could not send products,” said camp IDP Swe Swe. “We were facing a lot of difficulties.”

Meanwhile, the Kachin state government and Kachin Baptist Convention (KBC), a Baptist Christian denomination in Myanmar, are working together to try to return to their homes some of the nearly 100,000 IDPs who live in about 140 camps.

Roughly 40,000 of those IDPs live along the Myanmar-China border, according to a 2018 report by Southeast Asia-based Fortify Rights. And about 40 percent of all displaced civilians in Kachin state are sheltering in camps in areas controlled by the KIA and associated rebel groups.