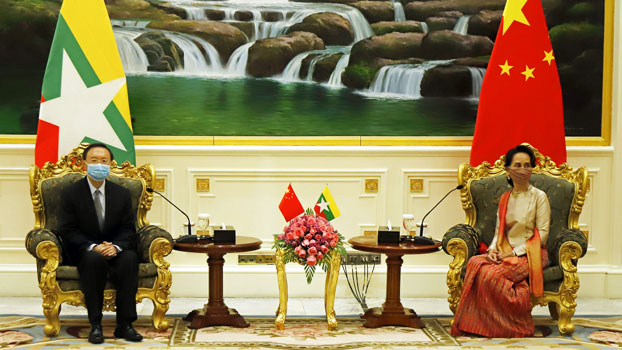 China’s top diplomat visited Myanmar this week to reconfirm major infrastructure plans with its Southeast Asian neighbor, his second trip to Naypyidaw in 2020 and a sign Beijing is shoring up relations in the region to help offset deteriorating ties with the West, analysts said Wednesday.

The visit by Yang Jiechi, head of the Chinese Communist Party’s foreign affairs office, follows weeks of strident U.S. criticism of China’s policies in the South China Sea, as well as pointed complaints about Beijing’s role in Myanmar by a senior U.S. diplomat in Naypyidaw.

They discussed speeding up work on the massive Belt and Road Initiative (BRI) projects, advancing the build-out of the China-Myanmar Economic Corridor (CMEC) — a subsection of the BRI — improving bilateral trade and investment, and ongoing support for Myanmar’s peace process, according to Chinese and Myanmar media reports.

Yang also said China would prioritize the sharing of a COVID-19 vaccine with Myanmar once it is developed, the reports said.

Myanmar political analysts and observers said that the Chinese diplomat’s visit — his second to the country this year — was driven by a desire to keep Myanmar firmly in its corner amid the intensifying rivalry between China and Western countries.

“Rather than pulling Myanmar into China-U.S. tensions, this is a good thing that the two countries show mutual understanding and cooperation,” political analyst Than Soe Naing told RFA on Wednesday.

“They say they will continue to implement projects already agreed to and will increase cooperation in the post-COVID period,” he said.

Yang’s meeting comes nearly eight months after he accompanied Chinese President Xi Jinping on a state visit to Myanmar to mark the 70th anniversary of the establishment of diplomatic relations between the two countries and to sign several deals to implement infrastructure projects under Xi’s signature BRI.

Xi’s visit — the first by a Chinese leader in nearly two decades — marked a “new era” of bilateral relations, Yang said during his current visit, adding that leaders of the two nations should “jointly build a community of Sino-Burmese destiny,” China's state-run Xinhua news agency reported.

Yang’s visit “shows that Myanmar is becoming more and more important to China and highlights Myanmar's great importance to its diplomacy,” said Khin Khin Kyaw Kyee, lead researcher at the Institute for Strategy and Policy–Myanmar, an independent, nonpartisan think tank.

China also wants to make sure that the big projects it is backing in Myanmar will continue as planned in light of a possible change of government in 2021, she said.

“China wants to secure the agreements for certain projects before the upcoming election,” said Khin Khin Kyaw Kyee, whose research focuses on Myanmar-Chinese relations and the BRI. Myanmar will hold general elections on Nov. 8.

China has invested in many large infrastructure projects in Myanmar, including the Kyaukphyu deep-sea port on the Bay of Bengal in Rakhine state, a high-speed rail line connecting Kyaukphyu to southwestern China’s landlocked Yunnan province, and the New Yangon city development project.

RFA contacted government spokesman Zaw Htay for comment about Yang’s visit on Wednesday, but he did not respond to questions.

Political analyst Maung Maung Soe, who used to live in the Burmese Communist Party-controlled region along the border, said Yang is likely focused on shoring up China’s relations with its neighbor.

“There is increasing rivalry between China and Western countries over winning Myanmar over to their sides,” he said.

“China might be seeking to consolidate its foreign relations,” he said. 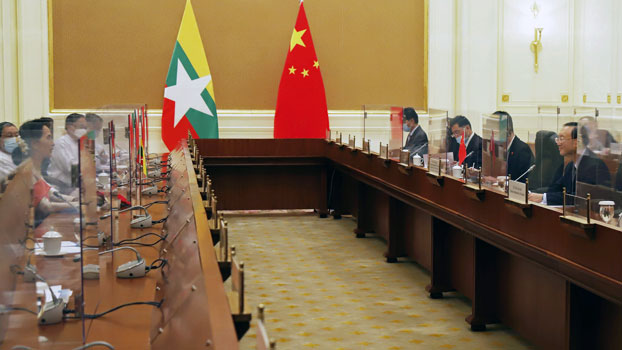 In a July 18 op-ed in the online journal The Irrawaddy, George Sibley, the chargé d’affaires at the U.S. Embassy in Myanmar, blasted China’s crackdown on Hong Kong, and its intimidation of neighbors and aggressive actions in the South China Sea.

“These events are taking place far from Myanmar, but the PRC [People’s Republic of China] has used similar behavior to intimidate, threaten, and undermine Myanmar sovereignty closer to home,” he wrote in an essay that blamed China for Myanmar’s troubles with unregulated banana plantations, forced labor, and corruption in the mining and forestry sectors.

Reiterating U.S. criticism of Xi’s BRI program, Sibley took aim at “infrastructure projects and special economic zones that pile on debt and cede regulatory control, and benefit China far more than they do the people of Myanmar.”

Hla Kyaw Zaw, a political analyst based in Yunnan province on the Myanmar-China border, said the visit was part of a larger effort by China to get the 10 countries that comprise the Association of Southeast Asian Nations (ASEAN) to back its greater agendas.

“China has two main agendas for ASEAN countries this year,” he said. “The first one is to sign the Regional Comprehensive Economic Partnership agreement with the ASEAN countries, [while] the second issue is to adopt a Code of Conduct for South China Sea issues.

The RCEP is a trade deal involving 15 countries in the Asia-Pacific region, including the 10 ASEAN members, China, Australia, Japan, South Korea, and New Zealand, and will become the world’s largest trade pact when signed later this year.

China has been pushing for the RCEP, seeing it as an opportunity to set regional trade rules without U.S. influence and to gain economically on account of a drop in U.S.-China commercial activity.

China also has been lobbying Southeast Asian countries to agree on a Code of Conduct for the South China Sea, a set of norms and rules for avoiding conflicts in disputed waters of the sea, which provides vital shipping lanes and is thought to contain abundant mineral and marine resources.

“China is now trying to win Myanmar’s support for these issues amid the tensions with U.S. over the South China Sea,” Hla Kyaw Zaw said.