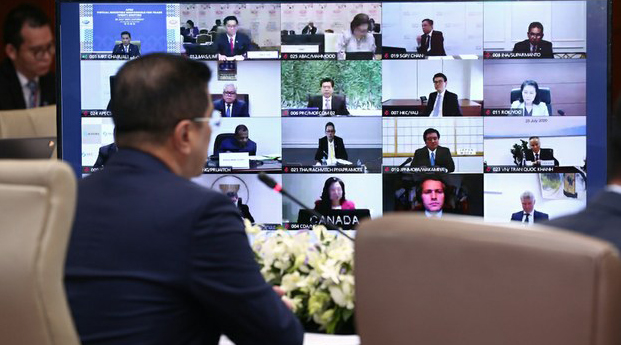 The 10 ASEAN member states and five other countries are expected to sign a massive China-backed trade deal on Sunday aimed at cutting tariffs and establishing common rules for trade, e-commerce, and intellectual property, officials and media reports said Wednesday.

The agreement is expected to be signed during a summit of the Regional Comprehensive Economic Partnership (RCEP) on Sunday, said Mohamed Azmin Ali, Malaysia’s international trade and industry minister.

“As we all know, the history of RCEP negotiations, which has been ongoing for the past eight years, has been a long and arduous journey but finally we are at the finishing line,” Azmin said in a statement he issued on Wednesday, after attending the final ministerial-level meeting for the RCEP Agreement along with officials from 14 other nations.

The 10 members of the Association of Southeast Asian Nations – Brunei, Cambodia, Indonesia, Laos, Malaysia, Myanmar, the Philippines, Singapore, Thailand, and Vietnam – along with China, Japan, South Korea, Australia, and New Zealand are expected to sign the agreement on what will also be the final day of a four-day ASEAN summit.

The participating RCEP countries account for close to 30 percent of the world’s population and gross domestic product, according to a July report by Brookings Institution, a Washington-based research group.

Negotiations began in 2012 for what Brookings said may be the largest free trade agreement ever. India and the U.S. are notably absent from a likely RCEP Agreement.

While India pulled out of talks last November, the 15 countries that are expected to sign the deal have made special arrangements to allow New Delhi to rejoin the pact, Japan’s Kyodo News reported.

“I wish to stress that the agreement would be able to enhance our regional economic integration with a vast array of multiplier effects,” Azmin said. “This would include, for example, having a customer base close to one-third of the world’s population which would mean greater market access for our businesses and traders.”

“The signing will also send a positive signal to the world that Malaysia, together with the other RCEP countries, has chosen to open our markets instead of resorting to protectionist measures during this difficult time,” Azmin said, referring to the global COVID-19 pandemic.

Globally, more than 51.8 million people have been infected with COVID-19 and more than 1.27 million have died, according to disease experts at the U.S.-based Johns Hopkins University.

Azmin said Malaysia’s involvement in RCEP has been discussed with national and local government officials along with domestic stakeholders.

“What is important here is we need to strike a balance between promoting international trade and protecting and giving domestic industries room to grow. I think that is the fundamental principle that we adopted during the negotiations in this RCEP,” Azmin told reporters in Kuala Lumpur.

Iman Pambagyo, Indonesia’s director general for international trade negotiation, said the participants hope the deal will drive the region’s economic development over the next two years, The Straits Times reported.

“[T]he signing of the RCEP is a signal to the world and businesses that countries in this region remain optimistic and have a forward-looking orientation in terms of deepening and expanding regional economic integration to play a bolder role in the global value chain,” he told the news organization.

Some analysts, meanwhile, noted that Washington’s absence may give Beijing an opportunity to establish new trading partners within the region.

“Will China use this leverage to advance short-term political interests – a kind of ‘China first’ strategy – or build a rules-based system that works for other countries as well, perhaps as a model for global cooperation?” asked Brookings.

“How Chinese leaders answer this question will shape the economic and political landscape for years to come.”

Wang Yong, director of the Center for International Political Economy at Peking University, told the South China Morning Post the deal could aid China’s efforts to improve economic cooperation with Australia and other regional nations.

“China and Australia still have common interests, and based on that the two countries can still explore cooperation in the context of regional and multilateral framework,” Wang said, referring to recent tensions between the two countries.

“With China and Asian countries well placed for economic recovery after we have successfully contained the coronavirus pandemic, relations between China and its neighboring countries will only grow closer.”

The U.S. in 2017 withdrew from the Trans-Pacific Partnership (TPP) under President Donald Trump as part of his “America First” policy. The TPP was negotiated by Trump’s predecessor President Barack Obama, as a pivot toward Asia.

Obama’s vice president, Joe Biden, was declared the winner of last week’s 2020 presidential election by most news organizations in the U.S., but Trump has yet to concede.

This is terrible news. China is dependent on the Asean cohesiveness and boast trade with Asean has surpass trade with the US. It is probably best to break up the Asean to counter a aggressive China. The RCEP is a detriment.