US Urges ASEAN to Reconsider Deals With Blacklisted Chinese Companies 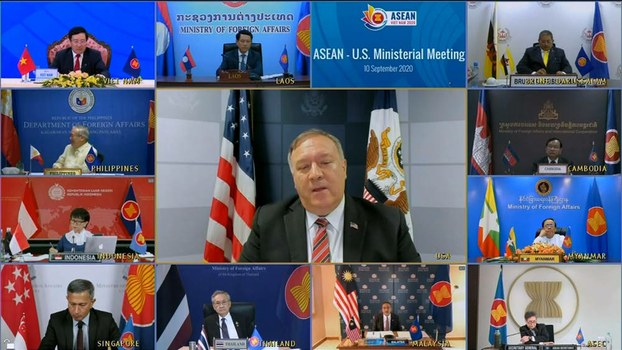 US Secretary of State Mike Pompeo addresses an online US-ASEAN Ministerial Meeting, Sept. 10, 2020.
VTV via AP
As ASEAN meets, US doubles down on call for boycott of China firms

U.S. Secretary of State Mike Pompeo on Thursday urged Southeast Asian countries to reconsider business deals with the 24 Chinese companies and individuals that Washington sanctioned last month for their roles in constructing Beijing’s artificial islands in the South China Sea.

The Chinese state-owned companies strong-arm coastal Southeast Asian nations in the disputed waterway and these countries need to actively preserve territorial integrity, Pompeo said at an online meeting with foreign ministers from the Association of the Southeast Asian Nations (ASEAN).

“Don’t just speak up, but act. … Don’t let the Chinese Communist Party walk over us and our people.”

“You should have confidence that America will be here in friendship to help you just as we have been for the last three and a half years.”

The Philippine government said it would work with these Chinese companies because it is in the “national interest” to complete flagship infrastructure projects in the country involving these firms, said Harry Roque, spokesman for President Rodrigo Duterte.

“We are not a vassal state of any foreign power and we will pursue our national interest,” Roque said. “[T]he president was clear, he will not follow the directive of the Americans because we are a free and independent country, and we need Chinese investments.”

Beijing, for its part, accused the U.S. of continuing to interfere in the South China Sea.

“The United States is becoming the most dangerous factor damaging peace in the South China Sea,” Wang said at the East Asia Summit Foreign Ministers’ Meeting.

“Peace and stability are China’s greatest strategic interest in the South China Sea,” he said, adding that those attributes were the common strategic aspiration of China and ASEAN.

“China hopes that countries outside the region, including the United States, will fully respect the wishes and expectations of countries in the region, instead of creating tension and seeking profit from it.”

China claims most of the South China Sea, saying it has “historic rights” to the waterway, where it has been building military installations and artificial islands as Beijing expands the footprint of its armed forces in the contested maritime region. China’s claims are demarcated by a so-called nine-dash line that appears on Chinese maps.

Tensions in the region have been rising since Pompeo’s declaration in July that Beijing’s claims to the South China Sea are illegal. Washington, he said at the time, stands with its Southeast Asian allies “in protecting their sovereign rights to offshore resources.”

In addition to China and Taiwan, Brunei, Malaysia, the Philippines, and Vietnam have territorial claims in the South China Sea. While Indonesia does not regard itself as party to the South China Sea dispute, Beijing claims historic rights to parts of that sea overlapping Indonesia’s exclusive economic zone.

Many ASEAN members say they are caught in the middle of the spat between Beijing and Washington.

On Wednesday, the opening day of the ASEAN meeting, Indonesia and Vietnam said the South China Sea dispute threatens regional stability and that countries should settle the acrimonious row by adhering to international law, including the 1982 United Nations Convention on the Law of the Sea, or UNCLOS.

Still, on Thursday, Vietnam’s Foreign Minister Pham Binh Minh said the ASEAN-U.S. relationship “has brought about mutual benefit to both sides,” according to the Associated Press.

“The U.S. role and contribution to maintaining peace, stability, and security in the region are encouraged,” he said.

The consensus document from the summit, held Wednesday, expresses concern over increased tensions in the disputed waters and affirms the need for freedom of navigation and overflight.

“We emphasized the importance of non-militarization and self-restraint in the conduct of all activities by claimants and all other states,” the communique states.

“We further reaffirmed the need to pursue peaceful resolution of disputes in accordance with the universally recognized principles of international law, including the 1982 UNCLOS.”

China’s expansive claims in the South China Sea were struck down in a landmark 2016 Permanent Court of Arbitration ruling, as judges found that China’s claims didn’t hold up under UNCLOS.

ASEAN member states such as Vietnam, Indonesia, Malaysia, and the Philippines have all emphasized UNCLOS and the 2016 ruling when discussing the South China Sea issue in recent months.

“There was an early proposal from Laos to remove any reference to UNCLOS, and that was rejected by ASEAN,” Connelly told Radio Free Asia, a sister entity of BenarNews.

He cited an earlier negotiating text he had knowledge of, and said there was a disagreement over the wording around UNCLOS that briefly held up the communique.

This year’s joint communique also lauded the “progress of substantive negotiations toward the early conclusion of an effective and substantive Code of Conduct in the South China Sea (CoC) consistent with international law, including the 1982 UNCLOS, within a mutually agreed timeline.”

In 2002, ASEAN member-states signed a Declaration of Conduct with China, expressing their willingness to peacefully settle disputes over the South China Sea.

Close to two decades later, the group and China have not been able to agree on a follow-on document – called the Code of Conduct, or CoC – that would clearly set out guidelines for how claimants in the South China Sea must behave.

Connelly said some ASEAN members were unhappy with the communique’s optimistic statement on the CoC.

“China put a lot of pressure on ASEAN member-states to make a statement about progress on the CoC, even though there hasn’t been any progress since last year,” Connelly said. “If you read between the lines you can see some dissatisfaction among member-states on the lack of progress.”

While the communique does not mention when negotiations on the CoC will resume, Philippine Secretary of Foreign Affairs Teodoro Locsin, Jr. said during the ASEAN meeting on Wednesday that talks would restart “no later than” November, Bloomberg News reported.

“ASEAN is allowing China to save some face but making it very clear that it’s unhappy about the current state of affairs,” Connelly said.