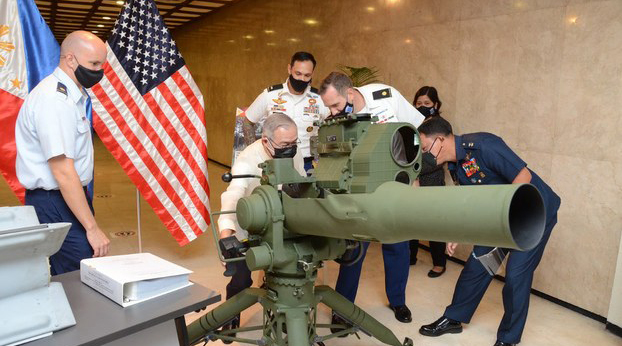 Washington will “stand with” Manila against pro-Islamic State militants and help defend its interests in the South China Sea, American National Security Adviser Robert O’Brien pledged as he turned over missiles and other weapons valued at $18 million during a visit here Monday.

The senior White House official conveyed the message at a handover ceremony for the delivery of U.S-made precision-guided missiles, munitions, and target-acquisition systems, during the second leg of a Southeast Asian trip that also took him to Vietnam – another country with claims in the disputed waterway.

“This transfer underscores our strong and enduring commitment to our critical alliance,” O’Brien told reporters in Manila.

“We hope these precision-guided missiles and ammunition will help the AFP protect Philippine lives in Mindanao and end the needless suffering imposed by ISIS in East Asia,” he said, referring to the Armed Forces of the Philippines and using a different acronym for the extremist group known as Islamic State (IS).

“The United States has been at the forefront of the fight against ISIS.”

O’Brien said the U.S. would also honor the longstanding Mutual Defense Treaty, particularly “in protecting your sovereign rights, your offshore resources and all of those rights that are consistent with international law.”

The treaty binds Washington to come to Manila’s military aid against any external attack, including in the South China Sea.

“As we approach the 70th anniversary of our Mutual Defense Treaty next year, we celebrate the strength of our important alliance and we look forward to working hand-in-hand for generations to come. Together, the United States and the Philippines will continue to ensure peace and prosperity in the Indo-Pacific region,” O’Brien said.

China, which claims nearly all of the South China Sea, has never recognized a 2016 international arbitration ruling, which went in favor of the Philippines and refuted the legal basis for nearly all of Beijing’s expansive maritime and territorial claims in the sea.

Six other Asian governments – Brunei, Indonesia, Malaysia, the Philippines, Taiwan, and Vietnam – have territorial claims or maritime boundaries that overlap with China’s. While Indonesia does not regard itself as a party to the South China Sea dispute, Beijing claims historic rights to parts of the sea that overlap Indonesia’s exclusive economic zone.

“Earlier this year the United States formally aligned our position on the South China Sea with the arbitral tribunal’s 2016 ruling. We stand with the Philippines in protecting your sovereign rights, your offshore sources and all those rights that are consistent with international law,” the U.S. national security adviser said.

His words echoed remarks he made in the Vietnamese capital a day earlier.

During a speech to the Diplomatic Academy of Vietnam in Hanoi, O’Brien said the U.S. valued its partnership with its former wartime foe as well as “close coordination on shared strategic concerns, including upholding peace and stability in the South China Sea and the Mekong.”

The U.S. and Vietnam, which normalized bilateral relations 25 years ago, “share a deep commitment to an Indo-Pacific rooted in rules of respect, fairness, and principles of international law such as sovereignty and freedom of navigation,” he said.

“This region has no interest in returning to an imperial era in which ‘might makes right,’” O’Brien added, according to a transcript posted on the American embassy’s website.

“This is why America has taken a firm stance against China’s bullying coercion in the South China Sea and the growing security threats in the Mekong region.”

In Manila on Monday, Philippine Foreign Secretary Teodoro Locsin Jr. noted that the transfer of weapons had fulfilled a promise made by U.S. President Donald Trump to his Filipino counterpart, Rodrigo Duterte, during a telephone conversation in April.

“This gesture reflects our strategic alignment of interests and our shared aspirations for enduring peace and stability for both our countries and the greater region,” Locsin said.

“I am pleased to receive, on behalf of the Philippine government, the donation by the U.S. government of precision-guided munitions or PGMs, valued at approximately $18 million,” the top Philippine diplomat said in his remarks, according to The Inquirer.

The foreign secretary noted the weapons would boost the Philippine military’s capability “in neutralizing identified or specific threats to national security, particularly in counter-terrorism operations.”

The transfer “underscores our strong and enduring commitment to our critical alliance,” O’Brien said.

“President Trump is standing with President Duterte as we combat ISIS here in Southeast Asia,” he said.

Maj. Gen. Edgard Arevalo, the spokesman for the Philippine military, said the “smart munitions” from the U.S. would help boost the government’s fight against Muslim militants in the south.

“We may have been successful in counter-terrorism operations, most notably in Marawi, with ordinary munitions fitted in our legacy aircraft,” he said. “But with the advent of these missiles and munitions, we are certain that they will greatly boost our campaigns and contribute to the global drive to fight and defeat terrorists.”

Officials from both countries did not discuss the terms of the weapons transfer.

During a five-month battle in 2017, government troops defeated pro-IS fighters from Southeast Asia and other regions after the militants had seized the southern city of Marawi.

Isnilon Hapilon, who then headed the Philippine branch of IS and had led the takeover, was killed at the end of the battle, which left the city in ruins. But some of the militants escaped and have since regrouped in the Mindanao region, intelligence officials told BenarNews, an RFA-affiliated online news service.

Hatib Hajan Sawadjaan, a leader of the IS-linked Abu Sayyaf Group, succeeded Hapilon as the overall chief of Islamic State in the Philippines. Authorities have blamed Sawadjaan for engineering a double-suicide bombing carried out by an Indonesian couple that killed 23 people at a Catholic church on southern Jolo Island in January 2019.

Sawadjaan is believed to have been killed in a clash on the island earlier this year, but the military has not confirmed his death.