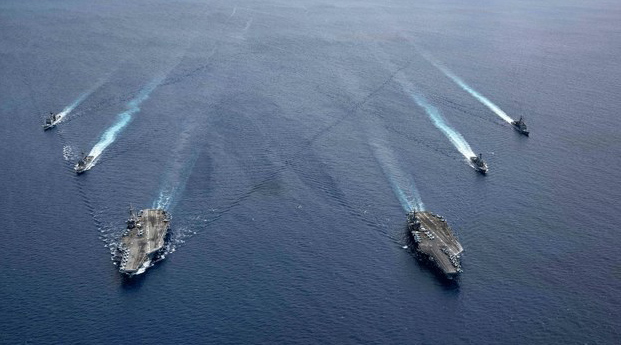 The USS Ronald Reagan and the USS Nimitz Carrier Strike Groups sail in formation during training exercises in the South China Sea, July 6, 2020.
US Navy via AP

Military posturing in the South China Sea has created a “very tense” situation, the Philippine armed forces chief said Tuesday, while in Malaysia, the visiting Chinese foreign minister said the waterway should not be “teeming with warships.”

Speaking to reporters and foreign correspondents in the Philippines during an online forum, Gen. Gilbert Gapay said China’s aggressive posturing risked driving other claimants into a conflict in the South China Sea, which Beijing claims nearly all as its own.

“It’s very tense. The situation has now become more tense because China is conducting its own unilateral exercises. It even fired its own missile,” Gapay told the forum, referring to a military drill in August. “It is really a potential flash point in this part of the globe.”

In Malaysia, Foreign Minister Hishammuddin Hussein hosted his Chinese counterpart, Wang Yi, where they discussed their own concerns about the waterway, among other issues.

“We both agree to maintain peace and stability in the South China Sea with the view that the South China Sea should not be the ground for major power wrestling, teeming with warships,” Wang, who also serves as State Councilor for the Chinese government, told a news conference after the meeting.

“China and ASEAN have the capacity and wisdom as well as a responsibility to maintain peace and equality in the South China Sea,” he said, referring to the 10-member Association of Southeast Asian Nations.

In a joint press statement, Hishammuddin and Wang “underscored the importance of maintaining peace, security and stability, as well as freedom of navigation and overflight above the South China Sea.”

They also declared that they would work with ASEAN members to intensify efforts to toward an “effective and substantive Code of Conduct (CoC).”

For nearly two decades, ASEAN members and China have been unable to agree on a CoC for claimants in the South China Sea.

The two foreign ministers did not tell a select group of reporters, including from state-run news organizations in Malaysia and China, whether they had discussed the fate of six Chinese fishing boats or their 60 crew members who were intercepted by the Malaysian Maritime Enforcement Agency on Friday. The boats were detected in territorial waters off the southeastern coast of Johor state.

On Monday, the Chinese government called for a “fair investigation” into the case.

Wang, China’s top diplomat, took aim at the U.S. government for its efforts in the disputed waterway, saying the Western superpower was seeking an “Inter-Pacific NATO” along with India, Australia, and Japan.

“What it pursues is to trumpet the old-fashioned Cold War mentality to start up confrontation among different groups and blocs and to stoke geopolitical competition,” he said, responding to a reporter’s question.

“[T]his strategy contravenes the spirit of mutual benefit and win-win that has been pursued by the East Asia cooperation. It impacts the regional cooperation architecture with ASEAN at the center and it will eventually undermine the prospect of peace and development of East Asia,” he said. “In this sense this strategy itself is a big underlying security risk.”

In September, U.S. Secretary of State Mike Pompeo told ASEAN members that Washington insisted on the rule of law and respect for sovereignty in the South China Sea.

Days later, David Stilwell, the U.S. assistant secretary of state for East Asian and Pacific Affairs, criticized China for forcing nations into making a choice over the South China Sea, noting that Beijing had been building artificial islands and militarizing atolls in territories it claims.

Six other Asian governments – Brunei, Indonesia, Malaysia, the Philippines, Taiwan, and Vietnam – have territorial claims or maritime boundaries in the South China Sea that overlap with China. While Indonesia does not regard itself as a party to the South China Sea dispute, Beijing claims historic rights to parts of that sea overlapping Indonesia's exclusive economic zone.

In Manila, Gapay pointed at both China and the U.S. for their roles in creating uncertainty in the region.

“The situation in South China Sea remains volatile and uncertain because of the actions of certain actors in the area particularly China and the United States, to include the quad alliance of U.S., Australia, Japan and India,” Gapay said.

“We have seen aggressive action on the part of China from reclaiming the area to deploying some warships there. Their coast guards are very visible in the area,” he said.

Gapay spoke out a day after Defense Secretary Delfin Lorenzana downplayed the South China Sea wrangling as “manageable” and “stable” during a Senate budget hearing. The defense chief added that the nation should focus more on “internal threats” or the local communist party.

On Tuesday, Gapay also told the journalists that there was virtually no risk that towers and telecommunications equipment being set up by a China-backed company could be used to spy on troops. Philippine company Dito Telecommunity Corp., which is backed by China telecom, is setting up the towers and systems in military camps in the Philippines.

“We don’t see any security risk, it’s very low and we find it better that they are inside because we could have unannounced inspections. We could inspect them at midnight,” Gapay said.

The Chinese embassy in Manila did not immediately respond to a BenarNews request for comment.

Wang, who was in Cambodia before his meeting in Malaysia, traveled to Singapore later on Tuesday. He was scheduled to visit Thailand on Wednesday before heading to Laos.