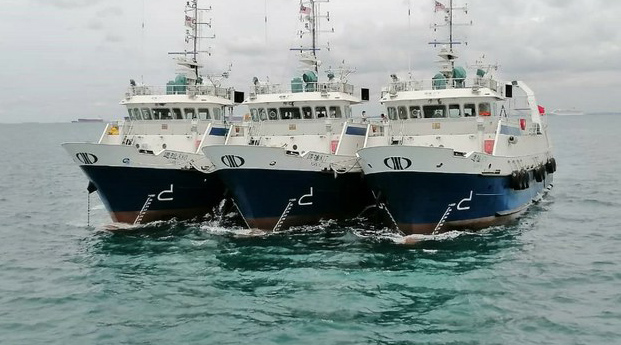 China’s foreign minister was due to arrive in Kuala Lumpur late Monday while touring five Southeast Asian nations, amid tensions in the South China Sea and days after Malaysia’s coast guard detained six Chinese fishing boats and their crews on suspicion of trespassing in territorial waters.

During his scheduled visit to Malaysia that ends Tuesday, Chinese State Councilor and Foreign Minister Wang Yi is scheduled to meet with Malaysian counterpart Hishamuddin Hussein. Meanwhile on Monday, Beijing urged Malaysia to carry out a “fair investigation” into the case of the intercepted boats and scores of Chinese fishermen in local custody.

“During the visit, YB Dato’ Seri Hishammuddin and His Excellency Wang Yi will discuss the status of China’s COVID-19 vaccine, enhancing economic cooperation, post-pandemic collaborations and strengthening existing ties and cooperative efforts between the two countries,” a statement Sunday from Malaysia’s Ministry of Foreign Affairs said.

China and Cambodia signed a free-trade agreement on Monday during Wang’s visit to Phnom Penh, the first leg of his regional trip.

After visiting Malaysia, Wang will go to Thailand and Laos before undertaking a transit visit to Singapore, reported Xinhua, China's state news agency.

“The two Foreign Ministers also engaged in a candid and in-depth exchange on regional security concerns, as well as issues of mutual interest in the context of ASEAN-China relations in which the Philippines acts as China coordinator, as well as in broader multilateral fora,” a Philippine foreign ministry statement said.

Wang’s outreach comes amid escalating tensions between the United States and China over the disputed South China Sea, with both countries lobbying Southeast Asian nations for support.

Six other Asian governments have territorial claims or maritime boundaries in the South China Sea that overlap with the sweeping claims of China. They are Brunei, Indonesia, Malaysia, the Philippines, Taiwan and Vietnam. While Indonesia does not regard itself as party to the South China Sea dispute, Beijing claims historic rights to parts of that sea overlapping Indonesia’s exclusive economic zone.

In July, Malaysia said Chinese coast guard and navy ships intruded into Malaysian waters in the disputed waterway 89 times between 2016 and 2019, Reuters reported. These Chinese ships often stayed in the area despite the Malaysian navy telling them to leave, the Malaysian government said.

Also in July, Malaysia said it rejected China’s “Nine-Dash Line” that roughly demarcates its claims to most of the South China Sea. This statement was a response to China protesting Malaysia’s initial claim last December, in a submission to the United Nations, to an extended continental shelf in the South China Sea.

The Chinese fishing boats and 60 crew that were intercepted by the Malaysian Maritime Enforcement Agency on Friday were detected in territorial waters off Tanjung Setapa, on the southeastern coast of Johor state, MMEA officials said.

Malaysian maritime authorities are very serious in ensuring that country’s waters are always protected, and will not compromise with any party that violates the law, an official with the agency said in a statement issued on Saturday.

On Monday, BenarNews, an RFA-affiliated online news service, called the Chinese Embassy in Kuala Lumpur for a statement, but it declined to comment on Wang’s visit or the detained Chinese fishermen.

Meanwhile on Monday, China’s foreign ministry spokesman said that its embassy in Malaysia had contacted local authorities and sent officials to visit the detained Chinese fishing crews and offer them necessary assistance.

“The Chinese side has asked the Malaysian side to carry out fair investigation in accordance with law, ensure the legitimate rights and interests of the involved Chinese citizens and keep us updated with the latest developments,” said Zhao Lijian, the ministry’s spokesman, told a daily press briefing.

BenarNews contacted MMEA to verify China’s statement, but the agency declined to respond.

One regional security analyst told BenarNews that Malaysia’s detention of the Chinese boats was legal but puts it in a tricky position “because it involves China.”

“This kind of incident might bring a negative impact if it is not properly managed,” Ramli Dollah, University Malaysia of Sabah, told BenarNews.

“Even today [Monday]  China’s Foreign Ministry spokesperson Zhao Lijian’s statements carried by the international media can be seen as a sort of pressure on the Malaysian government on this issue.”