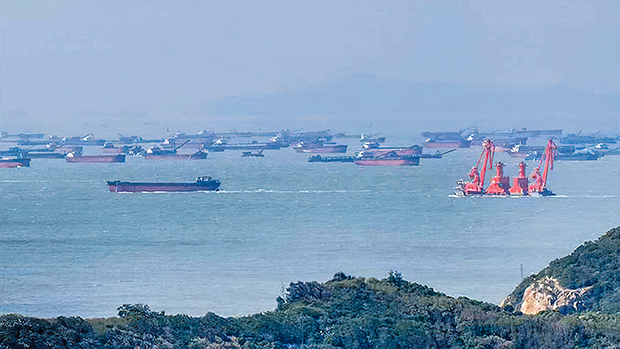 China's fleet of illegal fishing vessels is netting multimillion-dollar catches in Korean, Taiwanese, and Japanese waters, in defiance of international bans and treaties, and has been blamed for a sharp fall in squid populations.

Fisheries ministries and an international fishing watchdog estimate that thousands of Chinese ocean-going fishing vessels sail to other shores annually in search of catches -- mostly squid -- often carrying no identification or tracking technology.

Researchers described a fleet of "dark vessels" gathering by night off the coast of North Korea in defiance of an international ban, shining dazzling lights into the inky waters to attract the catch.

"In 2019, there were nearly 800 fishing boats from China illegally fishing in this maritime area," Hoki Lo, regional coordinator for Global Fishing Watch, told RFA. "The fishing boats ... are operating at a similar scale, using similar methods, this year."

Meanwhile, South Korea's Ministry of Oceans and Fisheries said in an Oct. 5 report that coast guards had driven off some 6,543 illegal Chinese fishing vessels in 2019.

Their incursions continue: some 360 Chinese fishing vessels entered its Exclusive Economic Zone (EEZ) every day this month, an increase of 80 percent compared with activity in September, the ministry said.

China has the world's largest ocean-going fishing fleet, comprising around 2,600 ocean-going fishing vessels, and 600 squid boats, which have been blamed for a collapse in squid populations as their nets sweep up immature squid before they are able to complete their breeding cycle.

"This is the first time in history that we have observed the activities of these dark fleets on such a large scale and over such a long period of time," Lo said.

A Global Fisheries Watch report published at the end of July in the international journal Science Advances was based on tracking data for China's "dark" fishing fleet in waters off Japan, Russia, and the two Koreas.

"None of these ships sent out any public signals, and so can't be located by monitoring systems, so they operate in a loophole of international fisheries management," Lo said.

She said the Chinese vessels continued to operate in defiance of a United Nations Security Council ban in the wake of North Korea's nuclear tests in 2017.

Global Fisheries Watch uses four different satellite technologies -- including an automatic ship identification system and satellite telemetry -- to track these vessels, using cross-analysis to figure out which boat is which and plot their routes.

The blinding lights used to attract fish also aid in locating them, while the tracking systems can reveal that they return to ports in China with their cargoes.

Researchers believe North Korea may be secretly colluding with the Chinese authorities, but there is no data from the highly secretive Stalinist state, which isn't a member of the International Fisheries Organization.

"There have been rumors that fishing boats from other countries can be used to buy and sell fishing [in this region]," Chen Chi-hsin, an associate professor at Taiwan's Ocean University, told RFA.

"It is actually possible to enter North Korea’s territorial waters or economic waters without approval," he said. 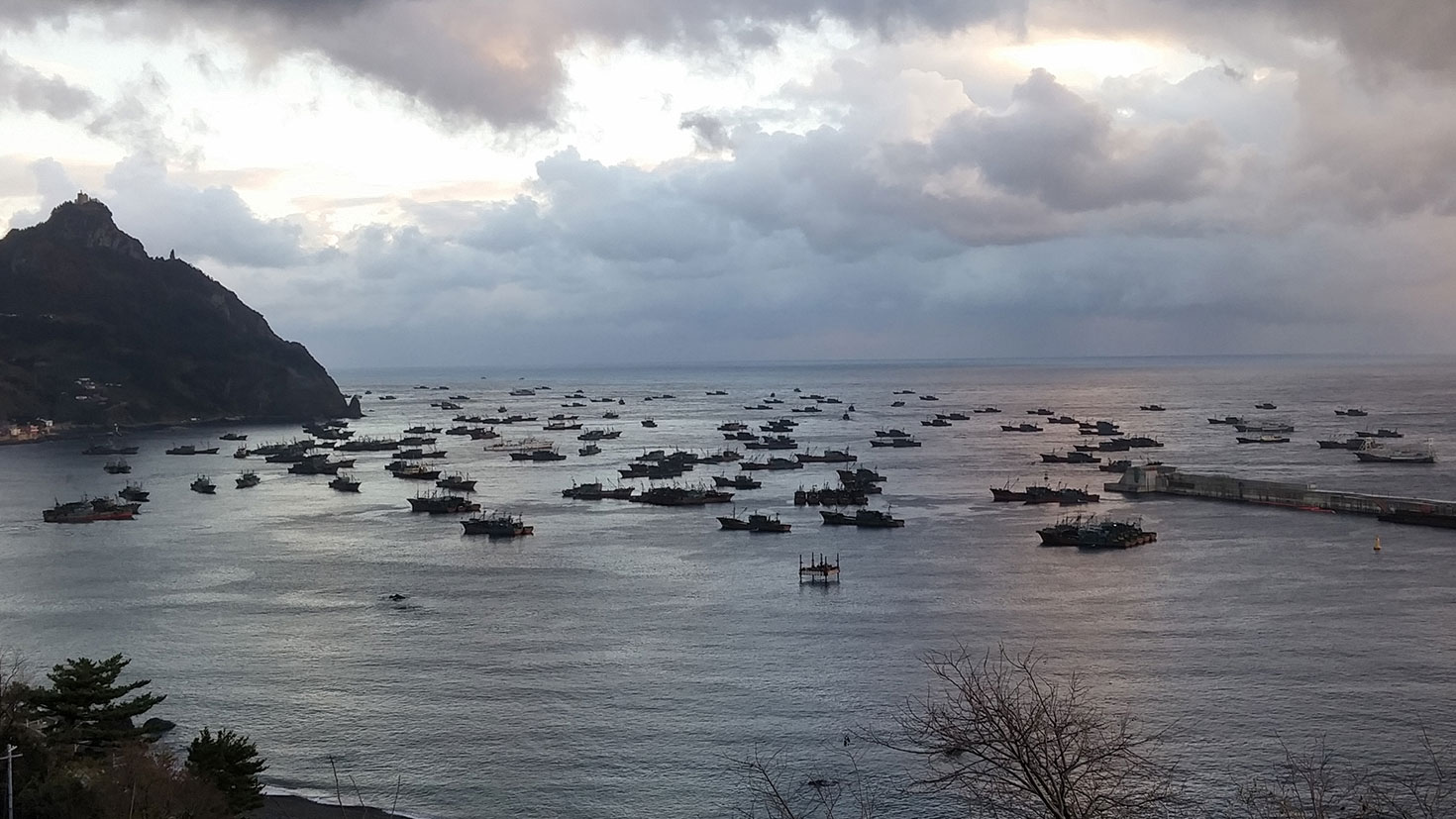 No response to report

Chinese and North Korean officials have yet to respond to the Global Fisheries Watch report.

"We tried to get in touch with the Chinese government before publication ... offering to share our innovative solutions and data analysis methods for their reference," Lo said.

She added: "We are also happy to assist governments in strengthening fisheries management."

Squid is a highly migratory species and no respecter of international borders, but squid fishing grounds have become highly politicized.

Fishing skippers in Japan have complained since 2018 that catches have hit a new low, amid plummeting populations.

"There has been a marked collapse in squid populations since 2003, and squid catches in South Korea and Japan have fallen by 80 percent," Lo said.

And growing incursions by Chinese vessels appear to be pushing North Korean fishing vessels into Russian and Japanese waters.

"Faced with increasing competition, North Korean fishermen may be forced to venture into other waters," she said, calling for an international tracking system for all fishing vessels, coupled with an international regulatory regime with buy-in from governments.

NBC reported in July that hundreds of “ghost boats” carrying the skeletons of North Koreans who starved to death found drifting through the Sea of Japan in recent months, were pushed from their previous fishing grounds by China's "dark" fishing fleet.

According to Chen, squid are a short-lived species that are highly sensitive to changes in their environment, so the impact of overfishing can be devastating to squid populations.

If they disappear, the smaller fish, shrimp, and organisms they once fed on could boom, having a negative impact on marine ecosystems.

Concern in the South Pacific

Large-scale squid fishing by Chinese vessels has become a cause of concern to the South Pacific Regional Fisheries Management Organization (SPRFMO), which manages fishing in waters off Chile, Peru, and the Galapagos Islands.

In 2019, the organization reported that 516 Chinese ocean-going fishing vessels were observed fishing in the South Pacific. It says the number of Chinese vessels has multiplied fourfold since 2010.

"Currently, the consensus is to use fishing curbs as an initial control method," Chen, who recently took part in an online conference with the group.

"But limiting the number of fishing boats or imposing other restrictions will need further discussion on the technical side," he said.

He said more than 50 percent of the global squid catch comes from Argentine waters in the South Atlantic and American red squid in the East Pacific, and the Japanese squid in the North Pacific.

Squid fishing resources have gradually increased since the 1980s, with growing investment in ships and declining catches, Chen said.

Between 50 and 70 percent of the global catch is caught by the Chinese fleet on the high seas, causing a wave of fishery disputes and political tensions.

The Ecuadorian military accused the Chinese fishing boats of turning off their tracking systems intermittently to avoid being monitored.

Last year, an Argentine navy cruiser fired on a Chinese fishing boat after it was warned against fishing in its economic exclusion zone, an area defined as being within 200 nautical miles of a country's coast.

Chen said Chinese vessels tend to move into areas that haven't yet been brought under international fishing regulation, obtaining fishing licenses and catch quotas before regional authorities have even visited the site.

Incursions in other areas

China is also making marine incursions in areas other than fishing.

Authorities on the democratic island of Taiwan on Monday seized two Chinese vessels and detained 28 crew members for illegally taking sand from the seabed in its economic exclusion zone.

Marine police and Penghu county officials seized the Fengyi 9969 sand-pumping ship and the Changxin 36 sand transportation vessel along with crew members from both Chinese vessels, including the captains.

The area they were found in is rich in natural resources and an important breeding ground for marine life such as narrow-barred Spanish mackerel and pencil squid, and the vessels were seized to "defend the natural ecology of the sea around Penghu," a government statement said.

The Penghu Land Inspection Department said the smuggled sand and gravel was intended to be sold back to Taiwan for profit.

"Our national army will protect the security of our homeland," Taiwan premier Su Tseng-chang said. "We have always handled cases of illegal incursions by Chinese sand-mining ships strictly."

Opposition Kuomintang (KMT) lawmaker Chen Yu-jen said it was unusual for quite so many ships to appear in the area at the same time.

"It's possible that [the Chinese Communist Party] are requisitioning civilian sand-pumping and sand cargo ships for military use," Chen said.

Ruling Democratic Progressive Party (DPP) lawmaker Hung Shen-han said the Chinese vessels were drawing the lifeblood out of the oceans, and called for marine patrols to be stepped up, with increased penalties for offenders.

"We need to increase pressure on and condemnation of the Chinese government via international media and marine conservation groups," Hung said. "They need to stop this kind of beggar-thy-neighbor behavior."

Reported by Mai Xiaotian for RFA's Mandarin Service, and by Chung Kuang-cheng for the Cantonese Service. Translated and edited by Luisetta Mudie.