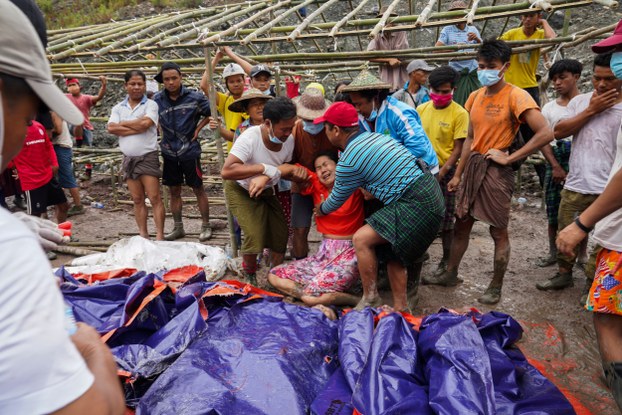 A team appointed by the Myanmar government to probe a massive landslide at a jade mine in northern Myanmar has begun its investigation into the deadly accident that killed at least 172 people, a Kachin state official said Tuesday.

Heavy rains caused piles of loose dirt and rubble to collapse on July 2, burying more than 200 scavengers looking for discarded pieces of jade left behind by miners and creating “lake of mud” full of bodies in Kachin state’s Hpakant township. More than 50 others were injured, and about 20 are still missing.

A day after the landslide, President Win Myint appointed a six-member investigative body led by Ohn Win, minister for natural resources and environmental conservation, to look into the cause of the latest of many accidents to hit the gemstone industry.

The panel also must determine the managerial responsibility, arrange for compensation for the families of the dead and injured, and recommend a security plan to prevent future disasters.

The investigative team visited Lone Khin, the site of the landslide, on July 5 along with another team from the Kachin state government, said Nay Win, the state’s minister of municipal affairs.

The panel headed by Ohn Win has a daunting task ahead of it as it probes the latest disaster in an industry plagued by corruption and lack of government oversight and in a region wracked by instability and armed conflict.

Inadequate regulation and oversight enable jade scavengers to comb through dangerous slag heaps, with the number of fatalities climbing in recent years.

According to the records of the ruling National League for Democracy’s local office, at least 137 people were killed in seven landslides and rubble pile collapses in Hpakant township last year.

In November 2015, a similar collapse of jade mining waste piles killed 116 scavengers and left 100 missing and presumed dead. The victims are nearly all yemase — desperately poor scavengers from across Myanmar.

Activists and local lawmakers say the cause of the disasters is well understood.

“The top factor over the years has been that the government — this government and the previous government, and the military junta before — has effectively given free rein to these powerful military-linked crony companies and armed groups to mine recklessly and rapaciously for years without any effective social and environmental safeguards,” said Hanna Hindstrom, senior campaigner for Myanmar at Global Witness, an NGO.

“Because there’s been no accountability, these companies have been able to continue these practices for many years,” she told RFA in an interview.

Tint Soe, a lower house lawmaker from Hpakant township, said a failure to maintain government regulations combined with corruption and the improper dumping of mining waste have led to tragic accidents.

“One of the reasons [for the disaster] was unregulated digging,” he said.

Lawmakers frequently receive reports on the mining industry from the Myanma Gems Enterprise saying that officers and units have made inquiries into jade mining operations, when in fact they have not, he said.

The industry is “very weak” when it comes to controls and "very difficult" for lawmakers and others to probe it, Tint Soe added.

Win Myo Thu, director of the conservation group EcoDev Myanmar, said the lack of the rule of law makes it difficult for the government to control the situation.

“The government has tried its best, but the region is in a state of instability with the presence of armed groups,” he said. “The army is mainly in charge of controlling the region because many issues are related to military affairs.”

He added that the Myanmar military plays a major role in the area because many companies in Hpakant have links to Chinese businesses and to the relatives of former army officers and leaders of ethnic armed groups.

Thein Swe, chairman of the Government’s Guarantees, Pledges and Undertakings Vetting Committee of the upper house of Myanmar’s parliament, said the government can only do so much.

“You can’t blame it all on the government,” he told RFA. “The government is facing a lot of difficulties, and the region is also a focal point for businesses involving a lot of self-interests. There are a lot of obstacles to maintain security and to control the region.”

The government faces a huge loss of revenue from jade mining in the Hpakant mining area, comprising six wards and 15 village tracts, because the region is prone to corruption, Thein Swe said.

Global Witness estimates that more than 80 percent of the jade is smuggled to China to avoid taxes by both countries.

The Myanma Gems Enterprise, controlled by the Ministry of Natural Resources and Environment Conservation, on June 26 ordered all Hpakant and Lone Khin mines to close until the end of September on account of heavy rains during the annual monsoon season.

Myanmar’s military said it has taken action against Colonel Nay Lin Tun, Kachin state’s security and border affairs minister, and an officer in charge of a military unit over the latest landslide, demoting them to their former positions after deeming them responsible for the disaster.

The army is taking action against soldiers who were responsible for security and failed to maintain order, he added.

The latest disaster could be a wake-up call, but so far the government has been “mostly shifting the blame onto the informal yemase and not taking sufficient responsibility for their own failures,” Hindstrom said.

Reported by Aung Theinkha and Zarni Htun for RFA’s Myanmar Service and by Jia Ao for RFA’s Mandarin Service. Translated by Nandar Chann. Written in English by Roseanne Gerin.