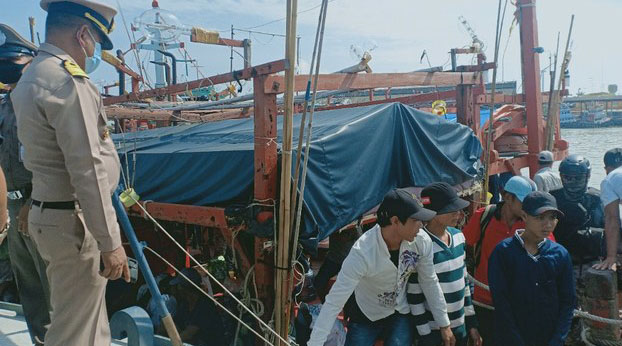 Vietnamese fishermen are presented to reporters in Thailand's Pattani province following their detention on suspicion of poaching, Aug. 18, 2020.
BenarNews

Authorities in Thailand’s Deep South said Tuesday they had arrested 36 Vietnamese fishermen and confiscated their four boats on suspicion of poaching in Thai waters.

“We found four fishing boats and 36 crews and we escorted them to our shore,” Thiranan told reporters gathered at a fishing pier in the province.

He said Yaring district police filed five charges against the 36, including fishing without a permit and illegal entry. Because of the COVID-19 pandemic, the detainees, who were assisted by a translator, were screened by local public health staff.

A police officer who asked not to be named because he is not authorized to speak to the media told BenarNews that the crew members were being detained at the Yaring police station.

While deckhands are subject to fine of up to U.S. $6,000 (187,000 baht) and the captains even more, depending on the size of their boats, detainees are generally tried in court and deported as soon as possible, the officer said.

The Vietnamese Embassy did not respond to a BenarNews request for comment.

Pattani province in Thailand’s Deep South is one of Thailand’s major fishing hubs, and businesses there employ more than 10,000 immigrants from Cambodia and Myanmar.

The arrests come two days after members of the Malaysian coast guard shot and killed a Vietnamese sailor during a violent confrontation with Vietnamese-flagged fishing boats suspected of encroaching in Malaysian waters of the South China Sea.

The Malaysian boat was approaching two Vietnamese fishing boats to conduct an inspection when it was rammed and attacked with Molotov cocktails and hard objects including metal rods, lumber blocks and wrenches, a Malaysian maritime official said.

“(Our crew) had no choice in their effort to defend themselves, their lives, and (the ship) but to discharge their weapons toward the fishing boat,” Malaysia Maritime Enforcement Agency Chief Mohd Zubil Mat Som said.

Vietnamese officials expressed deep concern over the incident and demanded those responsible for the death be held to account.

In Indonesia, authorities detained a Vietnamese boat and nine crew members carrying two tons of fish on July 26 as it was allegedly operating illegally in the North Natuna Sea bordering the South China Sea. On July 21, Indonesian officials detained two Vietnamese fishing boats after what they described as a dramatic high-seas brawl.