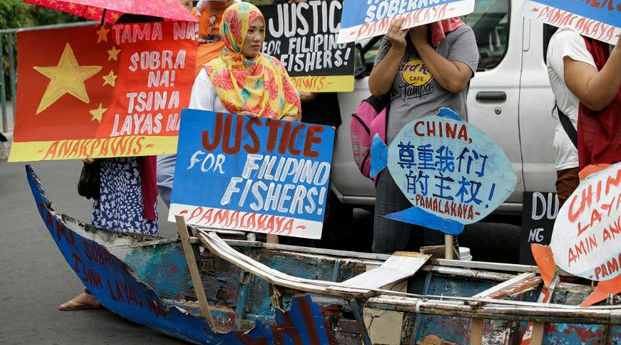 Filipinos rally outside the President Palace in Manila to protest against an incident where a Chinese ship smashed into a Philippine fishing boat, June 19, 2019.
AP
New construction on small, China-held islands in the South China Sea

Oil and gas exploration in the South China Sea can proceed immediately even without Beijing as a partner, the Philippine energy chief said Wednesday, after President Rodrigo Duterte recently lifted a six-year ban on such activity in the contested waterway.

“If they [PXP Energy] want to negotiate with China National Offshore Oil Corp., they can do that but that is not a precondition for them to resume the work,” Cusi told reporters in a virtual briefing.

A PXP Energy Corp. unit holds the right to drill for oil and gas in the area, the Bloomberg news service reported on Wednesday. The unit is in talks with China National Offshore Oil to drill there for oil and gas.

He was referring to Duterte’s decision last month to end an exploration ban imposed in 2014 amid a territorial dispute with Beijing in the South China Sea.

Duterte lifted the ban about a month after he strongly defended a 2016 international arbitration tribunal’s award, which struck down virtually all of China’s claims in the disputed waters.

Chinese officials did not immediately respond Wednesday to a request for comment on Cusi’s announcement.

After Duterte lifted the moratorium, a Chinese foreign ministry spokesman said his country wanted to keep working with the Philippines on regional energy projects.

“China and the Philippines have reached [a] consensus on joint exploration of oil and gas resources in the South China Sea and set up relevant consultation and cooperation mechanisms,” Beijing’s foreign ministry spokesman, Zhao Lijian told a daily briefing in Beijing on Oct. 16. “We hope the two sides will work together for new progress in the joint exploration.”

Cusi said last month that Duterte’s decision to lift the energy exploration ban would not affect a 2018 memorandum of understanding (MoU) with China to jointly explore oil and gas in the South China Sea.

Under that MoU, signed when President Xi Jinping visited Manila, both countries agreed to a plan where the Philippines would have a 60 percent stake in resources extracted from the Reed Bank and China would get the remaining 40 percent.

The Reed Bank, or Recto Bank as the Filipinos call it, is within Manila’s exclusive economic zone (EEZ) northeast of the Spratly island chain and is believed to sit atop vast untapped natural resources.

That region is where a Chinese trawler rammed into and sank a Filipino fishing boat last year, leaving 22 Filipino fishermen adrift at sea for hours before a passing Vietnamese boat rescued them. Beijing was forced to apologize for the incident and offered financial assistance to the local fishermen.

Meanwhile, National Security Adviser Hermogenes Esperon Jr. expressed confidence on Wednesday that a Code of Conduct for the region between members of the Association of Southeast Asian Nations (ASEAN) and China could be signed by next year.

In 2018, Beijing agreed to a draft code that would eventually serve as basis for the agreement. The following year, the 10 members of ASEAN agreed with China to finalize the code in three years.

Claimant states other than China have been pushing for a code to spell out steps that each nation could take to avoid disputes before they spiral out of control. Some countries want the code to be legally binding and subject to ratification by signatory states.

“We are moving toward the Code of Conduct in our talks with China, and the ASEAN side is led by no less than the Philippines,” Esperon told reporters.

“We have already a single draft on the agreements and we still hope that by 2021, we could sign the final agreement,” Esperon said.

Renato Cruz de Castro, a professor at De La Salle University in Manila, said Beijing had sought to include a provision in the code that would forbid any companies from outside China and Southeast Asia from working in the South China Sea.

“We could have a deal. We could have joint exploration without any external party involved. So this is part of a Chinese gambit to exclude Japan, the United States, Australia … this is an issue between us claimant states, and we can resolve it ourselves,” de Castro told BenarNews, an RFA-affiliated online news service.

Reported by BenarNews, an RFA-affiliated online news service. Drake Long in Washington contributed to this report.