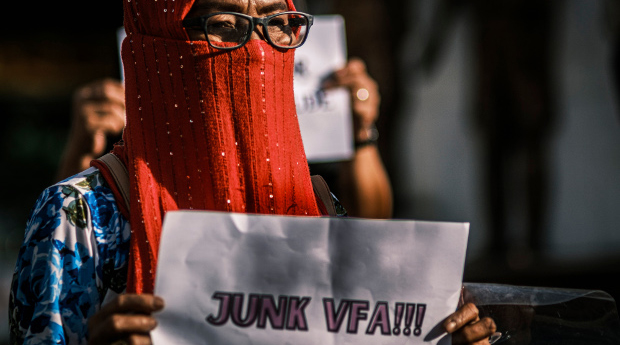 An activist holds a sign saying the Philippines should end the Visiting Forces Agreement with the United States during a protest in Manila, Sept. 8, 2020.
BenarNews

The Philippines gave itself another six months to decide whether to keep a key military pact with the United States intact because bilateral efforts have brought “the renewal of stability” in the South China Sea, Manila’s top diplomat said Wednesday.

In June, the Philippine government put on hold its plan to terminate the Visiting Forces Agreement (VFA) with the U.S. for six months, after President Rodrigo Duterte early this year threatened to pull his country out of the 1999 pact, despite increased military expansionism by China in the disputed waterway.

Foreign Secretary Teodoro Locsin Jr. announced Wednesday that President Rodrigo Duterte had asked him to notify U.S. National Security Adviser Robert O’Brien about the latest postponement of the Philippine decision on the VFA.

‘[T]he President has instructed me to convey with the appropriate formality his decision to extend the suspension of the abrogation of the Visiting Forces Agreement by yet another six months, to enable us to find a more enhanced, mutually beneficial, mutually agreeable, and more effective and lasting arrangement on how to move forward in our mutual defense,” Locsin said in a statement released by the Department of Foreign Affairs.

In June, Locsin said that Manila had decided to suspend abrogation of the VFA in “light of political and other developments in the region." On Wednesday he said the new extension was a recognition of bilateral efforts to bring back security to the South China Sea region.

“A great deal of credit for the renewal of stability and security goes to deft diplomacy, unequivocal expressions of policy, sturdy postures of strength combined with unfailing tact, and pragmatic national security advice exhibited by both our governments in the same period,” Locsin said in his message to O’Brien.

The decision by Manila to hold off on its decision about the VFA, which has allowed large-scale joint military drills with U.S. forces in the Philippines, came after Duterte took an unprecedented  strong stance against China at the United Nations General Assembly in September.

In a speech to the General Assembly, Duterte described a 2016 arbitral tribunal award that struck down virtually all of Beijing’s claims in the contested waters as “beyond compromise.” Manila and Beijing have competing claims in the South China Sea.

He gave the speech amid an uptick in tensions between Beijing and Washington, after the U.S. in August placed sanctions on 24 Chinese companies and people for their roles in constructing China’s artificial islands in the South China Sea.

This “clarity and strength” is never risky, unlike “confusion and indecision” that aggravate risk, Locsin said.

Officials with the U.S. and Chinese embassies in Manila did not immediately respond to queries from BenarNews, an RFA-affiliated online news service.

‘A lot of consistency’

Some analysts saw Manila’s decision on the VFA coming, especially after Duterte in September pardoned a former U.S. marine convicted of killing a transgender Filipina.

The Philippine president’s decision to pardon U.S. Lance Cpl. Joseph Scott Pemberton angered many nationalist groups who said the VFA unduly favored the U.S. by according its troops special status.

Washington had indicated it was pleased with the decision. The United States Marine Corps said the former marine had already served the court-imposed penalty for his actions, so he wouldn’t be tried a second time.

At that time, political analysts said it was a sign that defense relations between the U.S. and the Philippines were on the mend after months of strident statements from both sides.

A less volatile period in Washington-Manila relations can be expected under an American administration led by Joe Biden, said Jay Batongbacal, director of the Institute for Maritime Affairs and the Law of the Sea at the University of the Philippines.

“The South China Sea has always been a bipartisan issue for the U.S. and U.S. foreign policy so we will see a lot of consistency,” Batongbacal said during a virtual press conference arranged by the Foreign Correspondents’ Association of the Philippines on Monday.

“And probably what will change is the overall tone as well as the emphasis because the last few years under [President Donald] Trump have been rather eccentric. [T]hat kind of extremism, shall we say brinkmanship and over the top statements, will be probably gone.”

Duterte, who months ago told U.S. citizens of Filipino descent to vote for Trump, congratulated Biden on Sunday after news organizations in the United States widely declared the Democrat the projected winner of the 2020 presidential election.