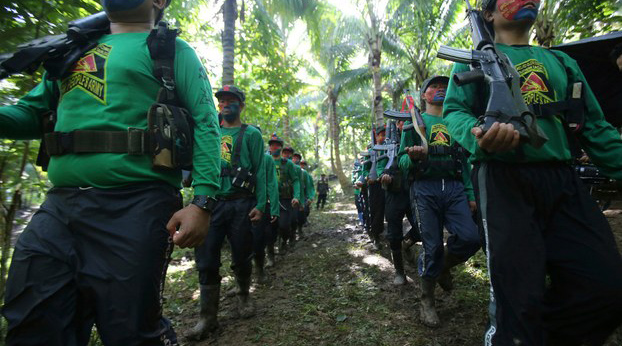 Guerrillas of the New People's Army, the military wing of the Communist Party of the Philippines, march at their encampment in the Sierra Madre mountains, southeast of Manila, Nov. 23, 2016.
AP

The outlawed Philippine communist party directed its armed wing on Wednesday to target Chinese companies involved in infrastructure projects, including state-backed firms that the United States has blacklisted for their part in Beijing’s militarization in the South China Sea.

The communists announced the move six weeks after the Philippine government – their enemy for the past half-century – declared that it would not follow Washington’s lead by cutting ties with firms involved in China’s building of artificial islands and military installations in the disputed waterway. At least one of those 24 firms sanctioned by the U.S. is involved in Philippine infrastructure projects.

The West Philippine Sea is how Filipinos refer to the South China Sea. Both the Philippines and China have contending claims in the waterway.

“Some of these same Chinese companies are involved in some big-ticket infrastructure projects for the construction of mining roads and dams that are encroaching deeper and deeper into the ancestral lands of the national minorities and forests in various parts of the country,” the CPP said.

“These infrastructure projects not only displace thousands of peasants and minorities from their lands, they also wreak havoc [on] the natural ecosystem of the country’s remaining forests,” it added.

Asked if this meant that Chinese firms would be targeted by the CPP’s New People’s Army (NPA) guerrillas, group spokesman Marco Valbuena, said: “They and their armed … securities are targets.”

“How? it depends on the assessment of local NPA commands, how best to frustrate their plans and their plunderous [sic] operations typically accompanied with militarization of lumad [the indigenous peoples of Mindanao] communities,” he told BenarNews, an RFA-affiliated online news service.

The NPA, whose force today comprises some 5,000 fighters scattered in different parts of the Philippine archipelago, have been waging Asia’s longest-running rebellion since 1969. Their ideology was originally inspired by the founding father of the People’s Republic of China.

To this day Mao caps, with a red star emblazoned on the front against a field of green, are popular among them. In the 1970s, when the Cold War was still raging, China was known to supply the Philippine communists with weapons in their fight against the U.S.-backed Marcos administration. But the CPP has long since repudiated links with Chinese communist doctrine in favor of their own ideological brand.

Valbuena said that the Philippine communist leadership hoped to “put a spotlight” on what he described as widespread destruction wrought by Chinese firms on the country’s environment.

CPP founder Jose Maria Sison, who lives in exile in the Netherlands, warned that these Chinese firms were “vulnerable to guerrilla operations.”

The main message of the CPP was to order the NPA to “mount more tactical offensives nationwide,” Sison told BenarNews by phone on Wednesday.

In its statement, the CPP said it was ordering all of its guerrilla units to “mount more frequent tactical offensives” against the government and the Chinese firms.

“Use all possible types of weapons – from rifles and command-detonated explosives, to spears and punji sticks – against the enemy,” the CPP said.

When Benar News contacted them, officials with the Philippine military declined to comment on the CPP’s announcement. Meanwhile, representatives of the Chinese Embassy in Manila were not immediately available for comment.

Manila: ‘We will pursue our national interest’

In early September, the Duterte administration defiantly said that it would not severe links with Chinese firms, which have invested billions of dollars in big-ticket projects in the Philippines.

In July, U.S. Secretary of State Mike Pompeo declared that Beijing’s claims to nearly all of the South China Sea on the basis of “historic rights” were unlawful. In late August, the United States announced that it was blacklisting two dozen Chinese companies as well as individuals for their involvement in reclamation activities in the sea.

On Sept. 1, Philippine presidential spokesman. Harry Roque said the government would keep working with Chinese firms because it was in the “national interest” to complete flagship infrastructure projects in the country.

“I will be categorical. [The] Sangley project will continue [and] all other projects involving Chinese companies that are banned in the U.S. can continue in the Philippines,” Roque said. “We are not a vassal state of any foreign power and we will pursue our national interest.”

One of the firms sanctioned by Washington, the state-controlled China Communications Construction Company (CCCC), has landed a U.S. $10 billion deal to construct an international airport at Sangley Point, just south of Manila.

CCCC has also secured approval for five other local infrastructure projects in Davao, Cebu, and the former Clark U.S. Air Force Base north of Manila. A third firm, China Energy Engineering Corp., is involved in a multi-million dam project up north.

Lately, nationalist groups have also expressed concern about another Chinese firm, China Telecom, which is part of a consortium called Dito Telecommunity Corp. The government has green-lighted it to build telecommunications towers and systems at Philippine military camps.

Apart from the Philippines, five other Asian governments – Brunei, Indonesia, Malaysia, Taiwan, and Vietnam – have territorial claims or maritime boundaries in the South China Sea that overlap with China. While Indonesia does not regard itself as a party to the South China Sea dispute, Beijing claims historic rights to parts of that sea overlapping Indonesia’s exclusive economic zone.

President Rodrigo Duterte, a self-styled leftist, was once a college student of CPP founder Sison, and there had been high hopes initially that a peace deal with the communists would finally be signed after Duterte took power in mid-2016. But the president broke off preliminary talks in 2017 after accusing the New People’s Army of continuing to carry out attacks against the military and police.

The Philippines should concentrate on reclaiming Sabah instead of wasting time claiming some islands in the South China Sea.