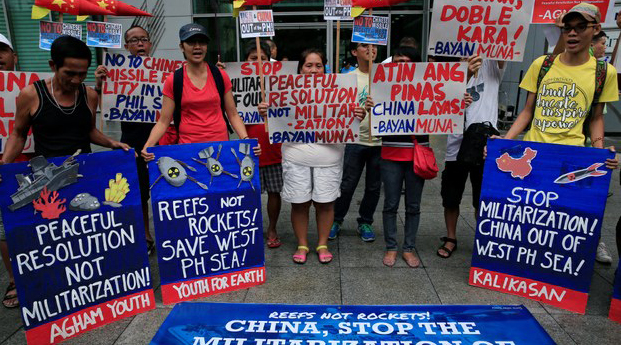 Activists in Manila display placards as they protest China's construction of military bases in the South China Sea's Spratly Islands in a file photo.
Reuters

A U.S. plan to permanently base Coast Guard ships in the western Pacific – which includes the contested South China Sea – is an assertion that no country, especially China, can claim international waters as its own, but the move may also fuel tensions, a Filipino fishermen’s group said Monday.

Meanwhile, the Philippine defense secretary said that as long as Washington ensures that these patrol ships don’t transgress into Manila’s Exclusive Economic Zone (EEZ), the United States can do whatever it wants because that is its decision as a sovereign state.

“Exercising the right of passage in accordance with international law will assert that no country, especially China, can solely claim established international waters,” said Fernando Hicap, chairman of Pamalakaya, a group representing Filipino fishermen, which has been among groups actively protesting Chinese incursions in Philippine-claimed areas of the South China Sea.

“Every country has the right to sail and conduct their respective businesses in the South China Sea sans China’s consent.”

Still, an increased U.S. presence in the disputed sea could “further China’s military presence and trigger an actual armed confrontation,” which would affect the “fishing security and rights of the Filipino and other” South China Sea nations’ fishing communities, Hicap said as he commented on the plan announced on Friday by Robert C. O’Brien, the U.S. National Security Adviser.

“While we support freedom of navigation by any country, whether they are claimants or non-claimants in the South China Sea, it must not escalate military tension. … We don’t want to get caught between the two clashing superpowers, we only want to fish in peace within our own territorial waters,” he told BenarNews, an RFA-affiliated online news service.

In a statement released from the White House, O’Brien announced that Washington would home-port advanced Coast Guard vessels in the western Pacific, in its efforts to promote a free and open Indo-Pacific region “where like-minded nations uphold the international rules-based order.”

“The United States is a Pacific power,” O’Brien said, adding that illegal fishing by Chinese boats and harassment of ships in the EEZs of other countries “threatens our sovereignty, as well as the sovereignty of our Pacific neighbors and endangers regional stability.”

On Monday, when asked to comment on the American announcement, Philippine defense secretary Delfin Lorenzana said that the U.S., as a sovereign state, could carry out such actions.

“It’s their decision, as long as they do not operate within the Philippine EEZ,” Lorenzana told BenarNews.

The EEZ is a 200-nautical mile (370 kilometer) area from Philippine shores into the sea that Manila has jurisdiction over under the United Nations Convention on the Law of the Sea, or UNCLOS.

BenarNews repeatedly contacted the Chinese Embassy in Manila for comment but no one there responded immediately.

China does not accept UNCLOS and has been known to intrude into the exclusive economic zones of the Philippines and other nations that have claims in the South China Sea.

Thitu is a Philippine-occupied feature where Chinese vessels have engaged in a sustained pressure campaign, as documented by the Asia Maritime Transparency Initiative.

Six other Asian governments have territorial claims or maritime boundaries in the South China Sea that overlap with the sweeping claims of China. They are Brunei, Indonesia, Malaysia, the Philippines, Taiwan, and Vietnam.

While Indonesia does not regard itself as a party to the South China Sea dispute, Beijing claims historic rights to parts of that sea overlapping Indonesia's exclusive economic zone.

In his statement, O’Brien said that the U.S. government, including the United States Coast Guard (USCG), was critical to countering China’s “destabilizing and malign actions” in the western Pacific.

Toward that end, the USCG is “strategically home-porting” enhanced vessels called Fast Response Cutters in the western Pacific, O’Brien said, but without giving more specific information about the location for a home base in the region.

Fast Response Cutters are 154 feet-long patrol boats that have a flank speed of 28 knots and are operational “game changers,” Navy officials said.

In the western Pacific, a new generation of these Fast Response Cutters will conduct maritime security missions, such as fisheries patrols, and enhance maritime domain awareness and enforcement efforts, the U.S. national security adviser said.

These missions and patrols will be conducted “in collaboration with regional partners who have limited offshore surveillance and enforcement capacity, and ensure freedom of navigation,” O’Brien said.

In September, the U.S. Coast Guard unveiled an ambitious new strategy for tackling illegal, unreported, and unregulated fishing (IUU), even as it called out China’s massive distant-water fishing fleet for extractive practices in the waters of its Southeast Asian neighbors and off the coasts of Central America and West Africa.

Meanwhile, in Washington’s latest push to engage Southeast Asia for its support on the South China Sea, Secretary of State Michael R. Pompeo is this week visiting Indonesia while on a five-nation tour, starting Monday.

At a press briefing in Washington last week, Pompeo said that in addition to bilateral issues, he would discuss how Indonesia and the U.S. could cooperate toward a free and open Indo-Pacific, in the face of what he described as a Chinese threat to Southeast Asian countries’ sovereignty.

And just last week, Tokyo agreed to supply the Indonesian and Vietnamese governments with patrol boats so they can secure their coasts amid tensions in the South China Sea.

Tokyo strongly supports preservation of the rule of law in international waterways and is troubled by some recent activities in the South China Sea that go against maritime law, Japanese Prime Minister Yoshihide Suga said in Jakarta last week.