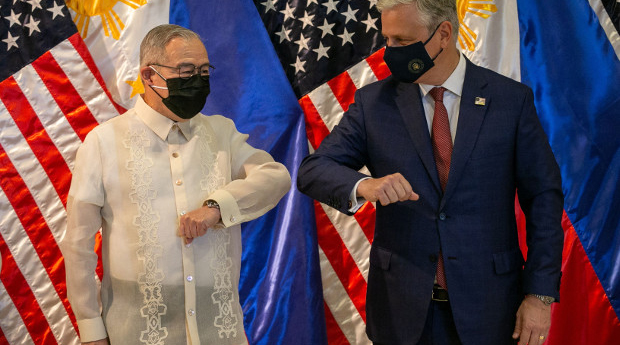 Beijing’s embassy to the Philippines criticized the U.S. national security chief Tuesday for “wantonly” trying to provoke the rival Asian superpower through remarks he made about the South China Sea during a visit to Manila the day before.

The United States is not a party to territorial disputes in the waterway, the embassy said, after National Security Adviser Robert O’Brien told Philippine officials on Monday that Washington stood with Manila in helping defend its interests in the maritime region.

“We firmly oppose these remarks which are full of Cold War mentality and wantonly incite confrontation,” the Chinese Embassy said in a statement posted on its website, referring to a trip to Southeast Asia just completed by the senior White House official.

“It shows that his visit to this region is not to promote regional peace and stability, but to create chaos in the region in order to seek selfish interests of the U.S,” Beijing’s mission said.

O’Brien visited Vietnam before arriving in the Philippines, on the second and final leg of his trip.

While in Hanoi on Sunday, he described how the Trump administration had taken “a firm stance against China’s bullying coercion in the South China Sea and the growing security threats in the Mekong region.”

The next day in Manila, during a handover to the Philippines of U.S. $18 million in American-made military weapons and hardware, O’Brien reminded the Filipinos how Washington earlier this year had “formally aligned our position on the South China Sea with the arbitral tribunal’s 2016 ruling.”

“We stand with the Philippines in protecting your sovereign rights, your offshore sources and all those rights that are consistent with international law,” the national security adviser said.

He was referring to an international arbitration court’s ruling, which went in favor of the Philippines and refuted the legal basis for nearly all of Beijing’s expansive maritime and territorial claims in the sea.

China claims nearly all of the waterway. Beijing has never recognized the ruling, or the United Nations Convention for the Law of the Sea (UNCLOS), on which the tribunal based its ruling.

Since the 2016 ruling, the United States, Australia, and other countries have criticized China for flouting international law in the South China Sea.

The Chinese embassy pointed out that the U.S. had never ratified UNCLOS.

“The U.S. itself refused to join the United Nations Convention on the Law of the Sea (UNCLOS), but it talked much about UNCLOS and abused its provisions everywhere, infringing on the maritime rights and interests of other countries,” the embassy said.

In addition to China, six other Asian governments have territorial claims or maritime boundaries in the South China Sea that overlap with the sweeping claims of China. They are Brunei, Indonesia, Malaysia, the Philippines, Taiwan, and Vietnam.

While Indonesia does not regard itself as a party to the South China Sea dispute, Beijing claims historic rights to parts of that sea overlapping Indonesia's exclusive economic zone.

“The U.S. is not a party to the SCS dispute but it frequently sends warships and planes to the SCS on numerous occasions for military provocations,” the Chinese statement said.

The United States has deployed warships to the waterway as part of freedom of navigation operations to challenge Beijing’s expansive maritime claims there.

For Beijing, this counts as interference in the efforts of China and Southeast Asian countries to negotiate and manage disputes peacefully, the Chinese embassy said.

Washington, it said, had “deliberately exaggerated regional tensions and attempted to sow discord between China and the Philippines,” it added.