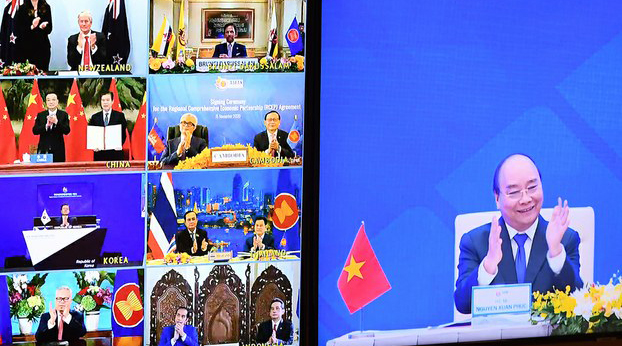 Vietnamese prime minister Nguyen Xuan Phuc (R) is shown on a TV monitor next to other nations' leaders at a signing ceremony for the Regional Comprehensive Economic Partnership trade pact, Nov. 15, 2020.
AFP

Leaders from 15 Asia-Pacific nations are hailing the signing of the world’s biggest trade deal as a step toward regional economic integration, yet economists and labor activists warn it may not bring prosperity to everyone.

Officials signed the Regional Comprehensive Economic Partnership (RCEP) – a China-backed trade agreement involving developed and less developed economies – during a virtual ceremony in Hanoi on Sunday after eight years of negotiations. The pact, which leaves out the United States, covers a market of 2.2 billion people or about a third of the world’s population.

“[W]e believe that RCEP, being the world’s largest free trade arrangement, represents an important step forward towards an ideal framework of global trade and investment rules,” the leaders said in a joint statement after the signing.

The agreements was signed by all 10 members of the Association of Southeast Asian Nations (ASEAN) – Brunei, Cambodia, Indonesia, Laos, Malaysia, Myanmar, the Philippines, Singapore, Thailand, and Vietnam – along with China, Australia, Japan, New Zealand, and South Korea.

The deal “is the most ambitious free trade agreement initiated by ASEAN,” officials said in the joint statement about the pact signed at the end of a four-day summit of leaders from the Southeast Asian bloc.

India, which had been the 16th nation in the RCEP negotiations, pulled out of talks in November 2019 amid concerns that the partnership would increase its trade deficit with China.

“The signing signifies that our commitment to multilateralism remains strong,” President Joko “Jokowi” Widodo of Indonesia, ASEAN’s largest economy, said in a statement on Sunday.

“It is an honor for Indonesia to be the coordinating country in this long process,” the Indonesian leader said of the RCEP talks, which began in 2012.

However, the signing is only a beginning and other countries tied to the deal should follow through on it, he said, according to the state-run Antara news service.

“This also needs our political will on the highest level,” Jokowi said.

Nguyen Xuan Phuc, the prime minister of Vietnam, which holds the ASEAN chair and hosted the summit, said he was pleased with the deal.

The signing of the world’s largest free trade agreement “will send a strong message that affirms ASEAN’s leading role in supporting the multilateral trading system, creating a new trading structure in the region, enabling sustainable trade facilitation, revitalizing the supply chains disrupted by COVID-19 and assisting the post-pandemic recovery,” Phuc said, according to Vietnamese state media.

The coronavirus pandemic, which has infected more than 54.7 million and killed more than 1.3 million worldwide, according to disease experts at U.S.-based Johns Hopkins University, forced the summit to be held virtually.

RCEP includes cutting tariffs and establishing common rules for trade, e-commerce and intellectual property in the 15 markets covered by the deal that, together, make up about 30 percent of global gross domestic product.

The agreement will take effect when six ASEAN nations and three of the other signatories outside of Southeast Asia ratify it, the joint statement said.

“After eight years of negotiations, the signing of the RCEP shines light and hope through dark clouds under the current international situation, showing that multilateralism and free trade are the right way forward and remain the right direction for promoting the growth of the world economy and the progress of humanity,” Li said, according to China’s Xinhua news agency.

“RCEP will be the main vehicle, through which regional economic integration within ASEAN and its dialogue partners, can be enhanced,” he said in a statement.

In the Philippines, a spokesman for President Rodrigo Duterte said the trade pact “means more food on the table for Filipino families.”

“This means the global market for goods made in the Philippines has just increased. This means that if we export more, we can create more jobs for our ordinary citizens,” presidential spokesman Harry Roque told BenarNews, an RFA-affiliated online news service.

Not all Philippine officials were as optimistic.

Sarah Elago, a Philippine MP and member of the ASEAN Parliamentarians for Human Rights (APHR), an NGO, described the RCEP negotiation process as an affront to democracy.

“Governments have given privileged positions to large business lobby groups at the expense of basic democratic principles. There was no meaningful public consultation, no parliamentary oversight and not even a publicly available text of the agreement for anyone to read,” she said in a statement posted on APHR’s Twitter feed.

“Do they really expect us to trust people who cannot act with basic transparency? It’s time to stop this masquerade and recognize that RCEP is bad news for human rights and democracy," she wrote.

Meanwhile in Jakarta, Trade Minister Agus Suparmanto said his country’s exports to participating countries could rise between 8 percent and 11 percent in five years after RCEP is ratified.

“Through the RCEP, Indonesia stands to enjoy the spillover effect from free trade agreements of the RCEP countries with non-participating countries,” he said in a statement.

“The expansion of Indonesia’s role in the global supply chain could increase Indonesia’s exports to the world by 7.2 percent,” he said.

However, an economist with an Indonesian NGO said the deal could result in wider trade deficits for Jakarta.

“Of course China’s influence will be even stronger. Even before RCEP, Indonesia’s imports have been increasingly dominated by Chinese goods,” said Bhima Yudhistira Adhinegara, a researcher at the Institute for Development of Economics and Finance.

“Without non-tariff barriers, especially in the food sector, farmers will be at a disadvantage and food self-sufficiency will be threatened,” he told BenarNews.

“We will see how it is beneficial to general people. Big-scale businesses who are ready surely gain, but the smaller ones would gain less. The government must monitor and prevent the influx of goods from abroad by having quotas,” she told BenarNews.

According to another observer, China is likely to see the new trading partnership with ASEAN and the other Asia-Pacific counties as a victory.

“It has been a promoter of RCEP since day one,” Wendy Cutler, vice president and managing director of the Asia Society Policy Institute, wrote on its website. “Then, as the U.S. retreated from the regional stage and pursued a trade policy based on unilateralism, Chinese leaders used that vacuum to portray Beijing as the reliable partner of choice for economic growth, trade, and investment.”

“But to describe RCEP as a China-led trade initiative misses broader trends in Asia where countries are focused on diversifying trading partners, solidifying supply chains and achieving economic and job growth through trade agreements,” she added.

An Indonesian analyst noted that Washington’s approach to the region could change.

Yose Rizal Damuri, head of the economics department at the Jakarta-based Center for Strategic and International Studies, said the U.S. could be further sidelined politically and economically unless it takes a new approach.

“The Trump administration may not care too much, because they tend to take unilateral measures,” Yose told BenarNews.

“But things could be different under [President-elect Joe] Biden,” he said. “The U.S. may be more involved again in the region.”