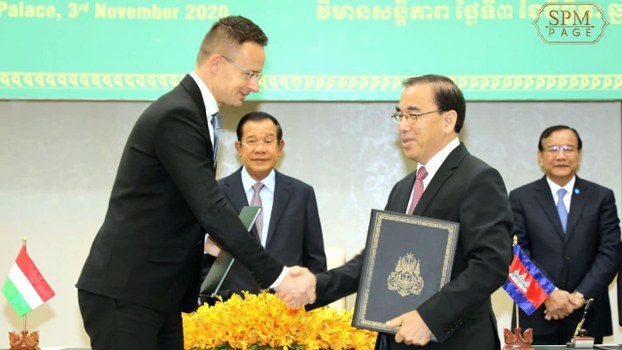 A Hungarian cabinet member who tested positive for COVID-19 after traveling to Cambodia, setting off a quarantine of hundreds of Cambodian officials, was asked by the Phnom Penh government not to wear a mask while taking part in a signing ceremony last week, a member of his staff said Friday.

Hungarian Minister of Foreign Affairs and Trade Péter Szijjártó tested positive on Nov. 4 after leaving for Thailand, but during his visit the previous day, he met with several senior Cambodian government officials, many of whom breached precautionary rules by not wearing masks, shaking hands with him, or not strictly observing social distancing.

At least four people have contracted COVID-19—the disease caused by the coronavirus—since then, while more than 1,675 have been placed under quarantine, including Prime Minister Hun Sen.

Several schools whose students’ parents made contact with Szijjártó, as well as businesses run by owners who met with the minister, have been forced to close, while Cambodia, which prior to his visit had reported only 292 coronavirus cases and no deaths, has been thrown into chaos. The country had opened schools for the first time since March last week, ahead of Szijjártó’s visit.

While Cambodia’s public also holds the country’s leaders responsible for the spread, many fault Szijjártó for failing to adhere to guidelines set forth by the World Health Organization to prevent transmission of the virus.

However, when asked why the Hungarian minister ignored coronavirus protocols, endangering himself and others, a spokesperson from his office’s press department told RFA’s Khmer Service that Cambodian officials had specifically requested that he not follow the guidelines.

“Foreign Minister Péter Szijjártó and his delegation always comply with the pandemic regulations of the host country and [fulfill] the requests of the hosts,” the spokesperson said in an emailed statement, noting that the minister had received a negative test result shortly before his departure.

“While in Cambodia, the minister followed the protocol of the host country. The reason why he did not wear [a] mask on certain occasion[s] was due to the explicit request of the host, namely, because the Cambodian partners did not plan on wearing mask[s] either.”

According to the spokesperson, Szijjártó and his Cambodian counterpart Prak Sokhonn held a phone conversation on Thursday this week, during which they mutually agreed to tone down rhetoric related to the incident.

“Both parties agreed that generating tensions between the two nations and making fun of those affected by the virus is to be considered highly repulsive,” the statement said.

Cambodia’s Ministry of Health announced last week that it would establish four public quarantine centers in Phnom Penh by late December. The centers will be able to collectively accommodate 460 people, and the ministry said it would build two more centers with the aim of accommodating 800 in the future.

Hun Sen and his family have so far tested negative for COVID-19, while the prime minister has been working from home and refraining from attending public ceremonies and events.