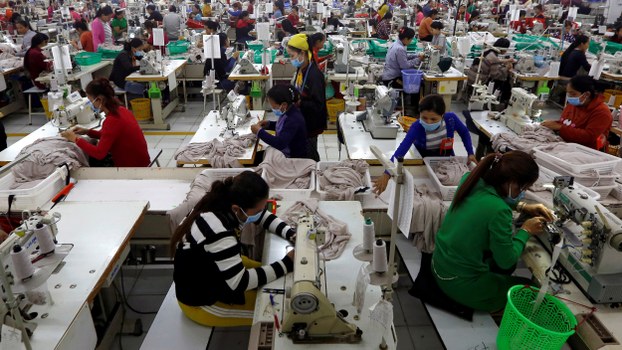 Employees work at a factory supplier of the H&M brand in Kandal province, Cambodia, Dec. 12, 2018.

Cambodia’s Ministry of Labor on Thursday announced a new minimum wage of U.S. $192 per month for 2021, an increase of only U.S. $2 from this year, drawing criticism from workers struggling with inflation amid an economy devastated by the coronavirus pandemic.

The ministry said that workers will also receive compensation for rent, transportation, and food—based on seniority in the workplace—that could bump their monthly earnings to between U.S. $209 and $220 a month.

“The Ministry of Labor would like to thank Samdech Prime Minister [Hun Sen] who has maintained peace, stability, social order and reforms to be more competitive with neighboring nations, drawing investors and creating jobs to relieve the people and restore the economy amid the COVID-19 pandemic,” the announcement said, referring to the disease caused by the coronavirus.

Cambodia’s U.S. $10 billion apparel industry, which employs 900,000 workers, has seen mass layoffs and factory suspensions amid a slow in demand during the coronavirus pandemic.

The industry is also bracing for the impact from the EU’s withdrawal of duty-free, quota-free access to its market under the “Everything But Arms” (EBA) scheme for some 20 percent of Cambodia’s exports—a decision that was announced in February—which went into effect on Aug. 12.

The EU’s move came in response to the Hun Sen government’s failure to reverse rollbacks on democracy and other freedoms required under the trade arrangement.

The 20 percent EBA withdrawal is expected to have a significant impact on the economy in Cambodia, which exported U.S. $6.4 billion in goods, mostly from its garment sector, to the EU in 2018—accounting for 45 percent of Cambodia’s total exports that year.

Rather than acquiesce to EU demands, Hun Sen has doubled down, calling the requirements a challenge to Cambodian sovereignty and using allegations that his government allowed Vietnam to encroach on Cambodian territory as a pretext to arrest outspoken critics.

Ath Thun, president of the Cambodian Labor Confederation, told RFA’s Khmer Service on Thursday that the new U.S. $192 minimum wage fails to keep pace with inflation and said that in order for workers to survive, they need to earn at least U.S. $230-250 per month.

He said that the new minimum wage will put workers “in danger” because they will need to work overtime to make enough money to support themselves. He said that if the government will not increase the minimum wage, it must halt inflation so that workers can get by on low incomes.

“We want a decent minimum wage for all workers—not just garment factory workers—but the government was unwilling to do so,” he said.

Ath Thun said that because the government had already made its decision, unions and workers would have no choice but to abide by it, as they are likely to face arrest if they protest.

“The unions are not given the freedom they need to operate effectively,” he said.

“The workers will face problems if they protest to demand a minimum wage increase. It is hard to make any change to the minimum wage due to the current political situation.”

Among those arrested in recent weeks was Rong Chhun, president of the Cambodian Confederation of Unions (CCU), who was officially charged with “incitement to commit a felony or cause social unrest” under Article 495 of Cambodia’s Penal Code and jailed at Prey Sar Prison in Phnom Penh on Aug 1 after he claimed the government has allowed Vietnam to encroach on Cambodian territory along their shared border. Since then, supporters have held near-daily protests demanding his release.

Prior to his arrest, Rong Chhun had criticized the government’s response to the coronavirus and, in July, wrote to Hun Sen calling on him to proactively address the issues that the EU has said prompted it to end Cambodia’s trade privileges.

RFA was unable to reach Ken Loo, secretary general of the Garment Manufacturers Association in Cambodia (GMAC), which represents factory owners, for comment on the government’s minimum wage decision Thursday.

In June, GMAC had urged Cambodia’s government to postpone annual negotiations on minimum wage, saying the sector needs to first recover from a dearth of orders from foreign buyers and factory shutdowns caused by the coronavirus outbreak.

Meanwhile, Mom Soksreymom, a worker from the W&D Garment Factory in the capital Phnom Penh, told RFA that each month she needs more than U.S. $200 just to cover her basic expenses, but also requires money for other things, in addition to sending funds home to her parents.

She said U.S. $192 is not enough to help workers maintain a decent living because the cost of daily goods is regularly increasing.

“I want the government to halt inflation, otherwise even if we are making U.S. $210-220, it still will not be enough,” she said.