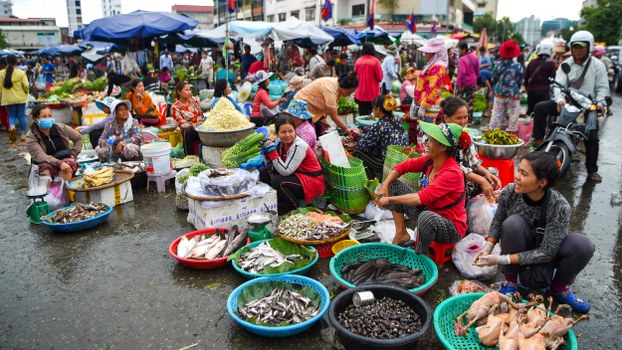 Vendors display produce as they wait for customers at a market in Phnom Penh, July 24, 2020.

The European Union on Wednesday reinstated duties on key exports from Cambodia that had enjoyed tariff-free access to its market, citing “serious and systematic concerns related to human rights,” dealing a blow to an economy already reeling from the impact of the coronavirus pandemic.

The withdrawal of duty-free, quota-free access to the EU’s market under the “Everything But Arms” (EBA) scheme for some 20 percent of Cambodia’s exports—a decision that was announced in February—went into effect because the country’s government failed to reverse rollbacks on democracy and other freedoms, the European Commission (EC) said in a statement. Affected exports include goods from Cambodia’s vital garment and footwear industries.

“We have provided Cambodia with trade opportunities that let the country develop an export-oriented industry and gave jobs to thousands of Cambodians,” Commissioner for Trade Phil Hogan said, adding that the EU intends to “stand by their side” as the country works to battle the pandemic.

“Nonetheless, our continued support does not diminish the urgent need for Cambodia to respect human rights and labour rights. I stand ready to continue our engagement and to restore fully free access to the EU market for products from Cambodia provided we see substantial improvement in that respect.”

Ahead of the reinstatement of tariffs, sources at the EC told RFA’s Khmer Service on Tuesday that the Commission will also consider reinstating tariffs on additional exports from Cambodia based on future developments as it continues to monitor the country’s rights situation.

The EC said it remains “open to engage with Cambodia on the necessary reforms,” highlighting current restrictions in the areas of freedom of expression and civil and political rights, as well as land disputes and labor rights.

“The Cambodian authorities should take action to restore political freedoms in the country, to re-establish the necessary conditions for a credible, democratic opposition and to initiate a process of national reconciliation through genuine and inclusive dialogue,” the statement said.

In particular, the EC called on Cambodia’s government to reinstate the political rights of opposition members and repeal or revise restrictive laws including the Law on Political Parties and the Law on Association and Nongovernmental Organizations (LANGO).

“If the government of Cambodia shows significant progress, particularly on civil and political rights, the Commission may review its decision and reinstate tariff preferences,” the EC said.

Prime Minister Hun Sen has said that EU demands to maintain the EBA are unreasonable and an encroachment on Cambodia’s internal affairs, and has continued to target members of the opposition Cambodia National Rescue Party (CNRP), which was banned in November 2017 for its role in an alleged plot to topple the government, as well as other activists who have spoken out against him.

The move to ban the CNRP was part of a wider crackdown by Hun Sen on the political opposition, NGOs, and the independent media that paved the way for his ruling Cambodian People’s Party (CPP) to win all 125 seats in parliament in the country’s July 2018 general election.

Seventeen CNRP activists have been held in pretrial detention at Cambodia’s Prey Sar Prison for “incitement to commit a felony or cause social unrest” since early this year after slamming Hun Sen’s leadership and his government’s response to the coronavirus pandemic.

On July 31, authorities also arrested prominent union leader Rong Chhun, who last month wrote to Hun Sen calling on the government to proactively address the issues that the EU has said prompted it to end Cambodia’s EBA privileges.

The EC source told RFA Tuesday that the Commission is “seriously concerned” by restrictions in Cambodia during the pandemic, and particularly by what they called “severe limitations to freedom of expression and the suppression of dissenting political views.”

“The EU is following closely the situation in the country, especially the recent arrests of political and labour activists, such as the president of the Cambodian Confederation of Unions (CCU), Mr. Rong Chhun,” the sources said, calling on Cambodia to uphold all rights protected under international conventions.

The 20 percent withdrawal is expected to have a negative impact on the economy in Cambodia, which exported U.S. $6.4 billion in goods, mostly from its garment sector, to the EU in 2018—accounting for 45 percent of Cambodia’s total exports that year.

The EBA has been vital for Cambodia’s U.S. $10 billion apparel industry, which employs 900,000 workers, but has seen mass layoffs and factory suspensions amid a slow in demand during the pandemic.

Rather than acquiesce to EU demands, Hun Sen has instead pivoted to ally China, hammering out a hasty Free Trade Agreement (FTA) with Beijing that is expected to be signed soon. But the deal focuses largely on agricultural exports and is unlikely to offset the impact of the EBA withdrawal on Cambodia’s garment sector.

Analysts and observers on Wednesday accused the government of Hun Sen—who has ruled the country since 1985—of clinging to power at the expense of the country’s economy and human rights.

“I’m not surprised that the partial EBA is now officially withdrawn, as the Cambodian government has been given ample opportunity and warning, yet has done little with it,” political analyst Seng Sary told RFA during a call-in show.

“I think it is time for the government to reach out to the opposition party, welcome it back into the political arena, and fight fair. The government needs to reopen the democratic space and allow for freedom of dissent.”

Yang Saing Koma, the founder of the Center for the Cambodian Center for Study and Development in Agriculture (CEDAC) and a senior official from the Grassroots Democracy Party, told RFA that the government is wrong to think Cambodia’s economy can endure a partial loss of the EBA.

“According to the government’s attitude towards human rights and democracy, Cambodia no longer needs to depend on trade preferences,” he said.

“But Cambodia needs to be able to stand on its own and improve its ability to compete economically with the outside world, and these two things require deep reforms within the current leadership and its governance.”

Chak Sopheap, executive director of the Cambodian Center for Human Rights (CCHR), noted that Cambodia’s government is bound by both the country’s constitution and international treaties to uphold human rights and democracy.

“We would like the government to improve the areas of concerns as stated in the European Commission’s decision,” he said.

“Cambodia loses nothing by restoring human rights and democracy and doing so would improve the country’s image, as well as trust in the government both domestically and internationally. During the pandemic, it’s even more important that the government reconsiders its position.”

Interests of the people

Meanwhile, members of the public told RFA they are barely able to make ends meet because of the coronavirus outbreak, with many being forced to take on additional debt through loans, and suggested the partial withdrawal of trade preferences would stretch them to the breaking point.

“I believe the 20 percent withdrawal will hurt people like me, but especially the factory workers,” said food vendor Ban Sok. “It is a sorry thing that the government doesn’t care enough to maintain the EBA.”

A student of international relations named Chan Sanh said the government’s “irresponsibility” had led to the trade sanctions and urged it to follow EU recommendations for reforms.

Veng Vutha, a farmer from Prey Veng province, told RFA “Hun Sen’s government only cares about staying in power,” but suggested that the sanctions will affect “both ordinary people and civil servants alike.”

RFA’s call-in show on the EBA decision even received a call from a government official in Prey Veng who spoke on condition of anonymity, citing a fear of reprisal.

“I have a small message for the government,” the official said. “Please reconsider and put the interests of the people first.”