'Reporters should speak to us more'

In An county, Sichuan province, our reporter meets anger and frustration. Left to fend for themselves, villagers curse the government.
Lin Di
2008-05-22 - An county
Tweet 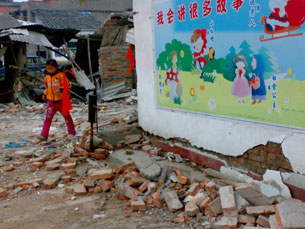 An elementary school in Anxian, Sichuan, where debris lies scattered around a colorfully painted wall, photographed on May 22, 2008.
RFA/Din Li

All is not well in An county, near the city of Mianyang, in Sichuan. Grief is turning to brewing anger.

On the main road into An county, I see an old man in his 70s.  Seeing that I am a foreign journalist, he tells me he’s upset with how the domestic media have been covering the quake: “There was no organized evacuation. After the quake we lived in tents for two or three days, and no one from the government looked after us. If the county party secretary and the county chief dared to show their faces now, they would be crucified. Eventually we got some food.”

A crowd begins to gather when passers-by see my tape-recorder. A man in his 30s stops and speaks into my mike: “Our town is a forgotten corner in the quake-devastated area. Seventy percent of the houses here have been rendered uninhabitable by the quake.”

One man complains that many people remain missing. Another says he wonders how much of the relief material will reach this part of the country: “If the government doesn’t do a good job with reconstruction, if we are still living in tents when the cold and damp Sichuan winter arrives, there will be trouble.”

Lin Di is a pseudonym to protect the reporter and his family. He reports for RFA's Mandarin service and filed this notebook while on assignment in Sichuan.