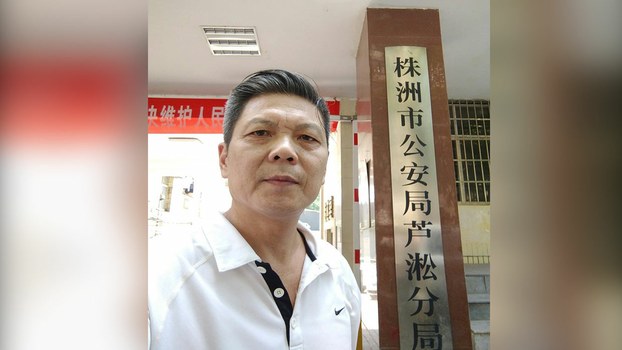 Authorities in the central Chinese province of Hunan have issued an effective travel ban to outspoken dissident Chen Siming after he expressed support for the Hong Kong protest movement.

Chen said he had applied for and been granted travel passes to visit Hong Kong, Macau, and Taiwan that should have lasted until 2027, but was recently informed by border guards that they were "no longer valid."

"All three of my passes are listed as invalid," Chen told RFA on Friday. "My initial reaction was that my personal freedom is being restricted, because everyone has the right to leave their country and the right to return there; it's a basic human right made in the declaration [of human rights]."

"Since I learned about these restrictions, I feel that my human rights have been violated and my freedom restricted," he said.

Chen's passes were revoked after he was placed under close surveillance by police in his home city of Zhuzhou around the politically sensitive anniversary of the June 4, 1989 Tiananmen massacre.

Chen had earlier been detained in 2018 for taking photos in a park with a tank in the background on June 4 of that year.

Earlier this month, Chen nonetheless managed to take a June 4 selfie and upload it to the social media platform WeChat while the police officers guarding him were distracted. The action won him a 15-day stint in administrative detention.

Last year, Chen was called in for questioning by police and warned not to express support for the Hong Kong protests after he launched a selfie campaign on social media in support of the pro-democracy movement there.

Chen says he believes he is now on his final warning with the revocation of his travel passes.

"This is a clear signal," he said. "This time around, I didn't just take a selfie; I also wrote something to go with it."

"There was one line that I think was likely quite dangerous [for me], and that was that I looked forward to an early end to the one-party dictatorship in China, and the realization of constitutional democracy," Chen said.

"Something like that can get you not just administrative detention, but even criminal detention or a jail sentence," he said.

But Chen said he won't stop speaking out in support democracy, both in Hong Kong and in mainland China.

"Without democracy, Hong Kong has no future," he said, adding that Beijing's current move to pass a draconian national security law to apply to the city was just another step in the denial of democracy.

"The real issue is about genuine democracy, universal suffrage, for the legislature and the chief executive," he said.

"I was banned from leaving the country as early as 2016," Ou said. "Back then, the border guards at the Lo Wu border crossing [to Hong Kong] told me it was because my going might endanger national security."

"It's a form of suppression, these travel bans on dissidents," he said. "It is a widening measure aimed at preventing contact and communication between people in mainland China and those outside the country."