A Child’s View of Tiananmen

At age six, Dan Southerland's son, Matthew, had heard enough to sympathize with the students protesting on the square. He drew dinosaurs representing the leadership and bird-like symbols of the students, easy prey to the much larger beasts.
Dan Southerland, Executive Editor
2009-06-04
Tweet 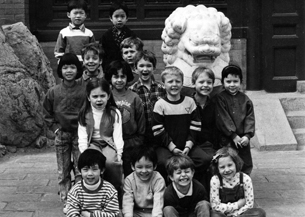 Matthew Southerland, second from right in second row, with friends from the Beijing International School, Fall 1988.
RFA
When the Chinese army began shooting protesters near Beijing’s Tiananmen Square on June 3, 1989, our son Matthew took it personally.

The crackdown had destroyed his world.

Several of Matt’s friends at the Beijing International School were quickly flown out of the Chinese capital, never to return.

Matt, then age six, had heard enough about the student protesters at Tiananmen Square over the weeks to sympathize with them.

On June 4, Matt did a pastel drawing of dinosaurs--a tyrannosaur, a triceratops, and a pterodactyl. As we later learned, the tyrannosaur and triceratops represented China’s leader Deng Xiaoping and the Chinese army respectively.

The two aggressive-looking dinosaurs threatened the much smaller, bird-like pterodactyl, which symbolized the students.

Matt had attended three schools in Beijing within only four years, starting with Beijing’s No. 1 Kindergarten, an elite institution where Chinese and foreign children were kept separate. He did not like the rigid routine there, so we moved him into the Indian School for a year.

From there he moved to the International School, which proved most to his liking. He was learning Chinese and making friends with kids from a variety of countries—Australia, Brazil, Canada, India, Malaysia, and Singapore, among others.

On June 6, Matt, along with his mother and sister, flew to Hong Kong on a chartered evacuation plane. They drove past burned-out buses that had been used to slow the Chinese army’s advance on Tiananmen Square.

I was grateful that my family had gone, because on June 7 a bizarre shooting incident occurred at the compound where we lived.

Chinese troops fired repeatedly into apartment buildings housing Americans and other foreigners, in an apparent effort to frighten them.

I could clearly hear the firing of the soldiers’ automatic weapons from my apartment building, which was in the Jianguomenwai Diplomatic Compound. Our apartment was not hit by the attack.

Diplomats later assembled enough evidence to show that the shooting was done in a calculated way. Soldiers were firing at specific apartment units from a building across the street from the housing complex.

The shooters appeared to be aiming at the apartments of foreign military attaches. In one case, a bullet smashed the windows of an apartment unit where two children of U.S. Embassy security officer Fred Krug were watching television.

The Chinese maid threw herself on top of the children to protect them.

The attack on the compound accelerated the evacuation of thousands of foreigners from Beijing.

After arriving in Hong Kong, Matthew began singing a song expressing despair over the departure of his friends. It was directed at both Deng Xiaoping and a  friend, whose departure from Beijing he lamented.

Trailing behind his mother on Hong Kong streets like a bear cub, Matt began belting out his song.

He sang it so many times that we wrote down the words.

Here’s a small part of the song:

“You made my friendship go away.
“I’m sorry to say but you are very selfish,
“because you are shooting and killing….”

On the subject of his Canadian friend, Matt sang these lines:

“I was kind of in my own world, feeling very emotional and sad,” Matt recalls 20 years later. “I expressed my feelings by singing.”

When Matt returned to Beijing with his mother and sister in July, he and I counted bullet holes—several hundred of them—in a building in our compound that had been attacked by Chinese troops.

It was a miracle that no one had been killed.

Twenty years later, Matt has not given up on China. He has studied the Chinese language in both Beijing and Taipei and is now fluent in Chinese.

His wife is from Taipei.

And he works as a researcher on Chinese affairs in the Washington area.