In Burma, Fear and Suspicion Prevail

Tyler Chapman returns to Burma and writes, in a new reporter’s notebook, that hopes for reform have been snuffed out by a ruthless crackdown leaving Burmese in debilitating fear of each other.
By Tyler Chapman
2009-04-17
Tweet 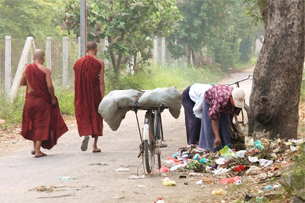 Some people are reduced to picking through garbage to survive.
RFA/Tyler Chapman
By Tyler Chapman


RANGOON—The tentative hope for change that glimmered in Burma little more than a year ago has been snuffed out, replaced by the darkness of despair. Fear rules.

When I last visited Burma, four months after the so-called Saffron Revolution of September 2007, people were wondering what would come next, how soon, and who would emerge to lead another wave of opposition to the military government that has ruled here since 1962.

“No more,” a friend told me this time. “The generals have built an empire. They’re not letting go.”

“Everything has failed,” another friend said. “We don’t know what to do now.”

You can’t trust anyone."
Burmese source


What happened between my visits was a government crackdown so severe that human rights groups estimate the number of political prisoners doubled in that time to at least 2,100.

Among those arrested was Zarganar, one of the country’s most popular comedians. He had the temerity to organize relief for victims of Cyclone Nargis—it left 140,000 dead or missing in the south of the country last May—and to tell foreign journalists that the government response was lacking. Among the charges: “inducing against state security.” Zarganar’s sentence: 35 years.

Others rounded up included members of the opposition National League for Democracy (NLD), labor leaders, student leaders, monks, even the lawyers who represented them. Many have been dispersed to prisons far from their homes, making family visits difficult.

Burma’s best known political prisoner, Aung San Suu Kyi, the NLD leader, remains under house arrest in her home on University Avenue in Rangoon. She was arrested shortly after being elected to lead the country in 1990. Five years later, she was awarded the Nobel Prize for Peace. That has made no difference.

The recent wave of arrests sent a chilling message to ordinary Burmese and intensified their fear that informers are everywhere. The fear is not new. The depth of fear is.

“You can’t trust anyone,” one of my friends said. “I don’t even tell my sister about what I am doing or where I am going.”

Government workers, from street sweepers to teachers to administrators, know to keep their opinions private lest they lose their jobs, or worse. The same goes for anyone whose job depends on a government license. That takes care of at least a third of Burma’s 50 million people.

“People are afraid of those above them and those below them,” one Westerner who lives in Burma told me. “The fear is pervasive.”

Even foreign tourists are seen as potential informers. I was shocked when a man to whom I had been introduced by mutual friends confronted me.

“Do you have friends in the military or government?” he asked.

Because, he said, people have heard that the government is recruiting foreigners to try to coax anti-government comments from ordinary Burmese.

I witnessed, and heard stories of, government arrogance and disdain for its citizenry.

At Shwedagon pagoda in Rangoon, I watched government officials shoo away worshipers to make way for two Caucasian VIPs.

I was aboard a scheduled government river ferry, waiting to depart, when five bureaucrats came aboard and decided they didn’t want to travel with foreigners. We were escorted off the boat.

Similarly, friends told me of passengers being taken off scheduled internal airline flights so VIPs could travel alone.

These examples pale in comparison to the lack of electricity, health care, and clean water available to the general public. Burma is one of the most impoverished countries on earth. Yet the generals and their cronies prosper.

The breakfast-time broadcast featured formations of servicemen standing at attention on a massive parade ground as the commander in chief, Senior General Than Shwe, reviewed them from an open-air stretch limousine. Then he spoke to the troops about the importance of preserving unity.

I watched for awhile in my hotel room and, with an hour to go in the broadcast, went downstairs for breakfast.

The television in the lobby was tuned to a Japanese soap opera.