Burma's cyclone Nargis has exposed a secretive society in which the junta and its supporters enjoy privileges far removed from the lives of ordinary Burmese. Tyler Chapman visited central Maymyo, home to many of the country's elite and now a vital part of Burma's military-industrial complex.
Tyler Chapman
2008-05-14 - MAYMYO
Tweet 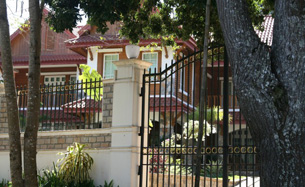 One of the typical vacation home built in and around Maymyo for generals, government officials, and Chinese businessmen. Photo taken in January, 2008.
RFA/Tyler Chapman
The British Army established this hill town in 19th century colonial times for its soldiers to escape the stifling summer heat of lowland Burma.

Now its colonial charm is giving way to the Burmese junta’s rush to military, technical and nuclear—yes, nuclear—development.

I saw and heard all about it during a visit earlier this year.

The old horse-drawn carriages so popular with tourists had yielded to army trucks and soldiers.  Although taking photos of soldiers is prohibited, I could hardly frame a shot without one in it.


Hundreds of young officer candidates were on the streets, wearing neatly pressed uniforms and carrying briefcases.

The young men are cadets at Burma’s version of West Point, just off the road as you arrive from Mandalay.

Signs at the academy’s entrance declare it home to "the triumphant elite of the future." The officer corps is drawn exclusively from ethnic Burmans, who make up 60 percent of the population. Minorities need not apply.

From a nearby pagoda, I could look down on the academy, a vast parade ground surrounded by high-rise barracks and classrooms. Acres had been cleared around the site for expansion.

A life of rank and privilege


The young men I saw marching that day are destined to enjoy a life of rank and privilege beyond the reach of the average Burmese. Yet any disloyalty will be punished severely—death for the officer and ostracism for his family.

Two men at the pagoda were watching me closely to make sure I didn’t take pictures. Photographing military installations in Burma can get you thrown out of the country, without your camera gear.

So I drove down the road to what the government is calling its new "information city," a 10,000-acre complex touted as the Silicon Valley of Burma. To my surprise, an official there said photos are permitted.

An impressive array of roads and buildings is under construction, some of it on land confiscated from local farmers.  The glassy headquarters building, with "Yatanarpon Teleport" across the front, is already finished.

It should come as no surprise that the complex has its own power substation. No one here will experience electricity shortages as ordinary Burmese do.

The government says Chinese and Russian companies, among others, have already committed to the project. The objective is to set up high-tech manufacturing facilities and to control the internet from here.

Burmese internet users know they must use caution in deciding what to read and say on the internet. The government is watching, especially since photos of the 2007 Saffron Revolution were transmitted over the internet to the outside world.

No one is saying how much the "information city" project is costing, or where the money is coming from. That is shrouded in secrecy. So is Maymyo’s role in Burma’s nuclear ambitions. Even so, people here are growing suspicious. The Russians are here.

In May, 2007, Burma signed an agreement for Russia to supply it with a nuclear research station, to be staffed by Russian advisers and at least 300 Burmese technicians.

Russians on the streets


Russia said the station would conduct agricultural and medical research—it would be too small for weapons. That assurance was greeted with a great degree of skepticism in the West.

Now, Maymyo residents are seeing Russians on their streets. A businessman pointed out to me a Russian woman who he said was one of 40 sent here to teach Russian to the Burmese nuclear technicians.

"They're all over town," the businessman said.

Locals say ground for the nuclear station is being prepared 40 miles (60 kms) East of here, in a valley constantly hidden from satellite surveillance by clouds.

A  foreign trekker who went that way said villagers there had been warned several months ago that the area is now off-limits. They told him they had heard helicopters and loud explosions frequently.

The trekker told me that when he returned to Maymyo, he was detained and questioned by military intelligence agents who wanted to know why he was in the area.

"They thought I was a spy," he said. "I was really scared. It took several hours to convince them I was just a tourist. There’s definitely something going on there or they wouldn’t be so paranoid."

Sleepy little Maymyo, once an island of tranquility, has joined 21st century Burma.

Tyler Chapman is a pseudonym to protect the author's sources.