China’s economic presence in Burma is growing fast, filling in where sanctions have forced the United States and its allies out.
2009-05-05
Tweet 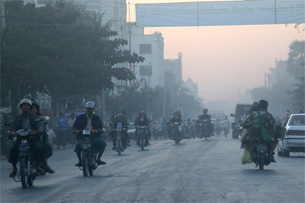 At U.S. $600, motorbikes from China are popular in Burma, and are a big part of Mandalay's air-quality woes.
RFA/Tyler Chapman

RANGOON—It was 7 a.m. and the sun, still low in the sky, was already heralding another sweltering spring day in one of Burma’s gateway cities to China.

I had just emerged from my hotel to visit a nearby tea shop for breakfast when a man coming toward me began waving his arms and shouting. I looked behind me to see why, but there was no one there.

Then I recognized him, a village leader from one of the mountain tribes I had visited a week earlier. What a surprise to see him now, hundreds of miles from home, in a Callaway Golf cap and aviator glasses.

“What are you doing here?” I asked.

Burma is not exactly awash with car dealerships. Western economic sanctions against the ruling junta, along with import taxes of up to 40 percent of a car’s value, have seen to that.

But where sanctions have closed Burma off from the United States and Western Europe, China has stepped in with open arms.

“Can you get a visa to China?” I asked the man.

I didn’t ask how he would pay for a car. Certainly his village was prosperous, but not that prosperous.

Could he be smuggling something to China to finance it?

Burmese jade and rubies, now on the West’s strict embargo list, bring premium prices just across the border in China, as do drugs made in Burma, especially methamphetamines.

I would never know.

One thing I did know: A car in China is far cheaper than one in Burma.

Unofficial estimates put the number of cars in Burma at 300,000, about half of them in Rangoon. That’s roughly one car for every 170 people. Demand outstrips supply. Even a 20-year-old Toyota Corolla can bring as much as U.S. $45,000.

The man’s plan was to cross into China, buy a car at Chinese prices, then try to bribe Burmese customs officials to let the car into the country with a break on the import tax.

Before we said goodbye, he and I exchanged telephone numbers. He gave me five numbers, including one for calling him on a Chinese mobile network that reaches into Burma. You buy the SIM card for the Chinese network, put it in your cell phone, and make overseas calls more cheaply than on the Burmese government network.

“We have become a province of China,” a friend told me.

Arriving in Rangoon on one of the three morning flights from Bangkok, I did a quick survey of the passengers in line at immigration. Many of them were carrying red “People’s Republic of China” passports, with Dell laptops slung over their shoulders.

Mandalay, Burma’s second-largest city, has become a magnet for Chinese investors and businessmen—so much so that there are now daily flights to and from Kunming, the capital of China’s nearby Yunnan province.

Trade between the two countries increased by 40 percent in 2007, according to the latest official figures.

And it was lopsided in China’s favor. China sent Burma nearly U.S. $1.7 billion worth of goods—everything from pots and pans to motorbikes—and Burma sent back just U.S. $371 million, mostly farm products.

“The good news is that China sends us stuff that we wouldn’t get otherwise,” a Burmese friend said. “The bad news is that most of it is cheap and poorly made.”

China is in the process of developing two major projects in partnership with Burma’s military government. They will assure China a role in Burma’s economy for a long time to come.

The first is a U.S. $2.55 billion pipeline linking the natural gas fields off Burma’s southwest coast with China. The pipeline will run 3,800 miles (6,080 kms) overland through Mandalay and on to Yunnan province.

A parallel oil pipeline will enable Chinese tankers from the Middle East and Africa to offload their cargoes off Burma instead of having to sail around Southeast Asia to the ports of eastern China.

The second project involves building a series of dams on the upper Irrawaddy River in Burma and connecting them to the Chinese power grid. Burma will get a share of the electricity in return.

Human rights groups say both projects will displace dozens of villages and thousands of people. It’s a price the villagers will inevitably have to pay for China’s economic development and its diplomatic support for the Burmese junta. There is no recourse.

Even so, people in Burma pay close attention what’s happening in the world, especially in Washington. They hope someday China’s stranglehold will come to an end.

I was talking with a garage owner in a small rural town when, out of the blue, he said:

“We’re waiting to see what [President] Obama will do to help us.”