Can All Monks Be Trusted?

The Burmese people respect their monks more than their government, but some suspect the monks have been infiltrated by informers.
2009-04-21
Tweet 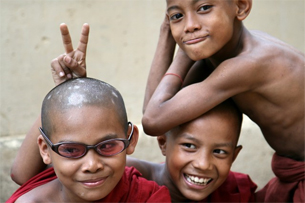 There is time for play. Novices are boys, after all.
RFA/Tyler Chapman

RANGOON—Every morning, just after sunrise, they stream out of the monasteries across Burma, alms bowls in hand.

The monks of Burma are the bedrock of the nation’s Buddhist heritage and traditions, symbolizing the charity, one person to another, that underpins Burmese society.

Awaiting them on the streets of every city and town are people young and old, rich and poor, with food for their bowls. The monks are barefoot, indicative of their avowed poverty, and so are those who donate, as a gesture of their humility and reverence.

It is a scene that has played out through the centuries, timeless in its rhythm and grace.

Some people practice their Buddhism by giving. They are the true Buddhists.”

I have witnessed this act of sharing many times, and it always impresses me how much more respect the Burmese have for their monks than for their government.

There are an estimated 400,000 monks in Burma, about equal to the number of troops serving the military regime that has ruled for 47 years, and most are far from reclusive pacifists.

“If you want to know what’s going on in Burma,” a friend once told me, “ask the monks.”

Indeed, it was the monks who led the so-called Saffron Revolution of September 2007 in reaction to the government raising the price of gas. The revolution was snuffed out when troops opened fire on the demonstrators, killing at least 31, and rounded up the protest leaders and sympathizers. Many of them are now in prison serving life sentences.

And it was the monks who rallied the early relief efforts when Cyclone Nargis hit in May of 2008, leaving 140,000 people dead or missing. The government lagged far behind.

Now, however, there are suspicions that the government has put informers even among the monks, to head off any more protests and to root out monks encouraging dissent.

Fear evident among monks, too

In my previous visits to Burma, monks would approach foreigners like me with complaints about the junta.  This time, that didn’t happen.

In Mandalay, when I asked an otherwise friendly monk about the political situation, he changed the subject. He wanted to talk about the price of computers. I took it as a measure of the fear that now permeates Burma: Keep your mouth shut for your own well-being.

Even so, the time-honored flow of Buddhist tradition transcends government oppression.

Spring in Burma brings the school holidays and, with them, the time for young boys to be initiated as novice monks. Almost every day, in big cities and small towns, I saw the festive processions celebrating this major transition in a boy’s life.

His family will save the hair shaved from his head, and the boy will don the robes of a novice and join the monastery to learn the basics of Buddhism. All his worldly possessions are left behind.

Younger boys will stay a few days, older boys two weeks. Poor families sometimes leave their sons longer, when life in the monastery is better than at home.

A gong will awaken the monks and novices at 4:30 a.m. They will have breakfast, pray, and then take their alms bowls to the streets to collect the food, mostly rice, for their midday meal. Local restaurants often donate meat and vegetables.

Volunteers do the cooking and, in many cases, most of the cleanup.

After noon, there will be no more food for the monks until breakfast. Afternoons are spent resting and studying. Darkness brings bedtime. Monks sleep on mats on the floor.

The monasteries provide a haven not only for monks and novices but also the needy, the sick, and the homeless.  They are community centers and meeting places.

I visited a monastery outside Rangoon that had taken in 160 children, most of them orphans from Cyclone Nargis.

The monastery was looking after a mother and daughter until the daughter could get medical help for unexplained seizures. Like most other monasteries, it exists on the charity of donors, one of whom was building a dormitory for the children.

“Some people practice their Buddhism by giving,” one of my friends said. “They are the true Buddhists.”

At pagodas around the country, there are bells for people to ring, three times, to announce they have done a good deed.

Buddhists believe that good deeds in this life—“making merit”—will put them in good stead in their next life, that despite an uncaring government and economic hardship, there is a chance for something better.

For the Burmese, being able to ring the pagoda bell three times offers the hope they need to persevere.