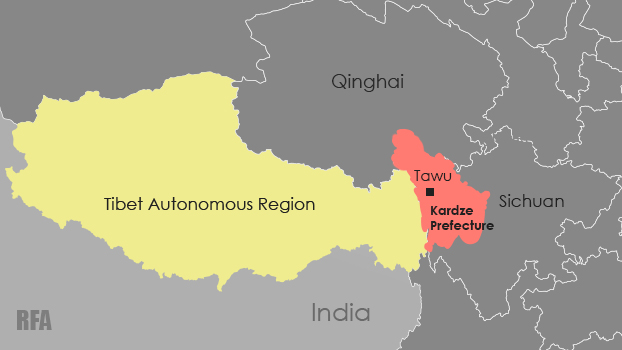 Confirmed cases of coronavirus infection in Sichuan’s Tawu county have now jumped to 38, with most patients among that total number found within three families, Chinese state media and other sources said on Friday.

Tawu’s six most recent patients were life-long residents of the county and had no history of traveling outside the region, media sources said, adding that all patients with confirmed cases of infection are being taken to Sichuan’s Dartsedo (in Chinese, Kangding) county for treatment.

Tibetan-populated Tawu (Daofu) county is now second only to Hebei province, where the infection first began to spread, as the area of China hardest-hit by coronavirus infection.

Speaking in a video released on Feb. 12 by Tawu’s Department of Information and Propaganda, one of the county’s patients—identified by the name Chong—said he had thought at first he had caught a flu and had stayed several days in bed.

“When it got worse, I saw doctors who told me that I probably had coronavirus, and I was kept in medical isolation in Tawu county. Then, when my condition still had not improved, I was sent to Dartsedo for treatment.”

“Now, I’m getting much better,” he said, adding, “I urge everyone to cooperate with local officials and doctors in their fight to prevent the spread of this infectious disease.”

Speaking to RFA’s Tibetan Service, a Tibetan living in exile and with contacts in the region said that a monk named Geshe Dorje from Tawu’s Nyatso monastery had made a similar video “sometime around the New Year, probably on Feb. 5.”

“It looks like the Chinese government is behind the making of those propaganda videos,” he said.

Tawu Nyatso’s monks have now been removed from their monastery and are being held in isolation at a hotel in the county, RFA’s source said, adding, “At first they were required to stay there for only 14 days, but now the period of isolation has been extended.”

Also speaking to RFA, a source in Tibet’s regional capital Lhasa said that infections in the city do not appear to have spread beyond the one case already reported.

“People are taking preventive measures by taking Tibetan medicines, either wearing them around their neck or burning them and smelling them like incense. Even the doctors who are treating the Chinese patient in Lhasa have told news reports that they are using Tibetan medicine to treat him,” he said.

“Most Lhasa residents think that the virus is now longer a threat and they have begun to go outside again, but there have been no official announcements telling them it is safe to do so,” he added.

The place names as you give them are very confusing. Of course, you can spell the names however you like that, please, put the correct pin in Chinese name at least in parentheses after whatever name you give these places.