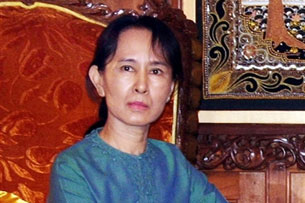 BANGKOK—A Burmese court has delayed issuing a verdict in the case against the country’s most influential opposition leader, in what human rights groups say is a sham trial aimed at sidelining her ahead of planned elections.

Nyan Win, attorney to Nobel laureate and National League for Democracy (NLD) leader Aung San Suu Kyi, said the court decided to delay the verdict until Aug. 11 because of an issue with legal procedures.

“They have found a problem with the legal process, although they have not explained what it is. We accept this and agree with them,” Nyan Win said.

“We feel that there is not only one problem, but two or three issues with the legal proceedings that need to be reviewed,” he said.

Nyan Win said the government is arguing the case based on Burma’s 1974 Constitution, which is now out of date.

“We have brought this problem up at the trial and feel that this is the most important issue that needs to be reviewed,” he said.

Aung San Suu Kyi faces up to five years in prison for allegedly breaching the terms of her house arrest in May when American John Yettaw swam across the lake behind her home and entered the compound uninvited. He stayed for two days before swimming back and being caught by local authorities.

Nyan Win said representatives from more than 10 embassies were in court Friday when the announcement to delay the verdict was made.

Reuters quoted a diplomatic source who attended the proceedings as saying that the verdict was delayed “because of the need to interpret legal terms relating to the 1974 Constitution.”

Teams of riot police were positioned outside of Rangoon’s Insein prison, site of the court hearing, while all roads leading to the facility were blocked by barbed-wire barricades.

Nearly 30 NLD members were detained in Burma’s Rangoon and Magway divisions in what was seen by colleagues as a preemptive strike by authorities trying to quell public support for the opposition leader.

A member of NLD Youth in Myangyan, Mandalay Division, said the daily prayer ceremony held for Aung San Suu Kyi’s release at a local pagoda had swelled from an average of 20 to 30 NLD members to more than 100 people as members of the public joined in.

“While there, we were surrounded by the USDP [government-backed civil group]. When the public saw that we were being surrounded, another group of about 200 citizens surrounded them,” he said.

“When we tried to distribute pamphlets with Aung San Suu Kyi’s picture on them, 15 or 16 people holding batons gathered to confront us. We weren’t sure if they were going to beat us up, so we decided to avoid a confrontation and gave up trying to distribute the pamphlets,” she said.

She added that more than 300 government-backed civil group members had been posted around Meiktila for added security.

Human rights organizations voiced strongly worded criticism of the trial and said that the delay of a verdict was simply a tactic to downplay public scrutiny of the legal process.

Elaine Pearson, deputy director for Asia at Human Rights Watch in New York, said the government’s use of an outdated constitutional clause to prosecute Aung San Suu Kyi “calls into question the whole reason why [the junta] are doing this.”

“It just shows that this isn’t really a trial at all—it’s a witch hunt. It’s being politically maneuvered. I think they know that there will be a lot of domestic and international outrage over this and maybe by delaying it … perhaps they think they will be able to deal with it in some other way,” she said.

Pearson pointed to August as a time of year when many Europeans, Americans, and diplomats tend to vacation and said that the Burmese regime might be seeking to delay the verdict in order to downplay it to the rest of the world.

But she added that playing out a longer trial is also in the best interests of the Burmese government in order to “detract the attention from the bigger issues.”

“It makes everything frozen in Burma in a way that peoples’ attention is not so much focused on the elections that are coming up next year, which are just going to further entrench military rule, and it’s not on the problems that are happening in the ethnic areas. It’s all on Suu Kyi and her trial at the moment,” she said.

Reuters quoted Benjamin Zawacki, a Burma specialist for Amnesty International, as saying that the repeated adjournments were orchestrated by the junta to make the court appear fair and impartial.

"It's very suspicious, since most courts wouldn't take this long," he said. "We knew the verdict was decided long ago. This is clearly political and not legal."

“The government of Myanmar is taking decisions that are closing doors regarding international cooperation and regarding future elections in 2010,” he said.

Aung San Suu Kyi, 63, had been scheduled for release in May after her latest six-year term of house arrest expired, but was re-arrested this month after Yettaw’s uninvited visit.

Burma’s junta has kept Aung San Suu Kyi under house arrest for nearly 14 of the past 20 years, since refusing to recognize a landslide victory by the NLD in 1990 elections.