An opposition parliamentarian calls the independence of Cambodia’s judicial system into question.
2012-05-31
Tweet 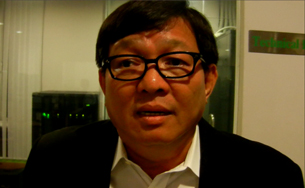 A prominent opposition lawmaker in Cambodia has written to the Cambodian Supreme Court, accusing it of being a “tool” of Prime Minister Hun Sen’s political party and seeking new legislation to streamline legal procedures in the country.

In a copy of a letter obtained by RFA and addressed to Supreme Court President Dith Monty, Sam Rainsy Party parliamentarian Son Chhay requested that the nation’s highest legal institution draft a law to ensure that judicial officials be provided with an environment in which they can “work more effectively.”

“A [new] law on the status of judges and prosecutors will allow them to work in a more professional manner,” Son Chhay wrote.

“Without this law and a [new] law [streamlining] court procedures, we can’t accept court verdicts,” the letter said.

Son Chhay went on to call the court “a political tool for the ruling party,” the Cambodian People’s Party (CPP), rendering it incapable of true judicial independence.

The opposition lawmaker also accused Dith Monty of ruling with a bias towards the CPP because he is a senior CPP official.

According to a document posted on the CPP’s website, Dith Monty is a member of the party’s permanent committee, while Supreme Court Deputy President Khim Ponn is a CCP central committee member.

“It’s hopeless when villagers have a case against CPP officials because some of the court officials are inevitably CPP members,” Son Chhat wrote.

“Can people involved in these cases honestly trust the court?” he asked.

Son Chhay said that he plans to raise his concerns with King Norodom Sihamoni and the Supreme Council of the Magistracy—the national body that regulates the Cambodia’s judiciary—for assistance in reforming the legal system.

Supreme Court officials have not yet responded to Son Chhay’s request.

Son Chhay’s letter came a week after the Phnom Penh Municipal Court sentenced 13 villagers from the city’s Boeung Kak Lake district to between one year and two and a half years in prison for “illegally encroaching on private property” after participating in a protest over a long-running forced eviction case.

The lawmaker said the case of the 13 women was improperly investigated and that the defendants had been refused the right to attorneys during their trial.

The letter also follows the Wednesday release of Leang Sokchouen, a former Takeo province staff member of the Cambodian League for the Promotion and Defense of Human Rights (LICADHO), from Kandal provincial prison after serving a two-year prison sentence for allegedly distributing anti-government leaflets.

After his arrest in May 2010, Sokchouen was originally convicted on charges of disinformation following a trial rights groups said had numerous procedural flaws.

In July 2011, an appeals court in Phnom Penh upheld Sokchouen’s two-year sentence while switching the charges against him from disinformation to incitement, without explanation.

The new charges, which rights groups say he did not have an opportunity to refute, were under a provision of a new criminal code that did not exist at the time of the offense.

Sokchouen had continued his appeal, and at a hearing on May 25, just five days before his scheduled release, Cambodia’s Supreme Court upheld the July 2011 verdict, in a move LICADHO called the “final rubber stamp on the outrageously flawed process.”

“According to our constitution the court is independent, but when court officials are affiliated with a political party they cannot maintain their independence,” he said.

“If the judicial system fails to provide justice, the villagers won’t trust the courts. This will lead them to take other measures, such as setting roadblocks and other means of protest, or simply cause them to turn to prayer in an attempt to resolve their problems.”

In its 2011 Global Competitiveness Index, the World Economic Forum ranked Cambodia 96th out of 142 countries in terms of judicial independence, which measures the perceived extent in which the judiciary of a country is independent from influences of members of government, citizens, or firms.

The country received a score of 3.1 on a scale where 1 is considered “heavily influenced” and 7 is seen as “entirely independent.”