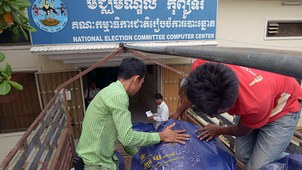 Citizens must apply for a certificate confirming their identities in order to vote in commune elections on June 4.

The Ministry of Environment says the NGO doesn’t acknowledge efforts to combat the problem.

A new report fingers a company owned by tycoon Kith Meng for the smuggling.

Cambodia Opposition Chief Urges Nonviolence For Candidates Ahead of Polls

He rejects recent threats of violence by the ruling CPP, saying his is the ‘gentle’ party.

Kem Sokha says he reached out to Trump officials, lawmakers and the large Cambodian expatriate community.

The army will suppress any protests of a ruling party win in June 4 local elections, Tea Banh says on Sunday.

The civil society group says the ban is a violation of free speech and calls for its reversal.

He says similar violence is likely to descend on Cambodia if his party loses upcoming elections.

The move comes days after a nongovernmental investigative organization issued a report on Vietnam’s trade in illegal logs from Cambodia.

The prime minister threatens an end to peace if his party is voted from power.

The Environmental Investigation Agency says kickbacks to Cambodian authorities have amounted to more than $13 million since early last November.

But an environmental group says any sand taken out of the country is done so illegally.

The prime minister should instead address ‘injustice and suffering’ in the country, he says.

Children of Cambodia’s 'ADHOC 5' Detail Difficulties of Their Detention

They express hope their parents will be freed, despite a ruling extending their detention.

The five, already held for a year, can remain in prison for an additional six months.

Cambodia criticizes a U.S. policy it says 'splits families' by sending people to a homeland to which they have no close ties.

Interview: 'Our Family Has Not Received Justice Yet' for Chut Wutty's Murder

The son of slain environmentalist Chut Wutty reflects on the killing on its fifth anniversary.

Kem Sokha tells supporters that upcoming local elections will be better than those held five years ago because of a revamped National Election Committee.

Vuthy Huot rejects assertions that he blended in with a group of opposition party officials to improperly access Prey Sar Prison on April 19.

Former soldier Oeuth Ang says his prison term for murdering Kem Ley does not offer an opportunity for him to reform himself.

Due to low market prices for their harvested salt, the owners of small sea salt farms in Cambodia now find themselves unable to pay back loans taken out from their banks. And this is forcing them to sell their fields to larger firms.