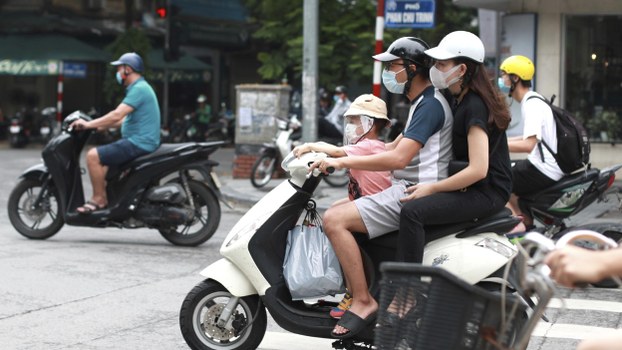 Vietnam has ordered an all-out fight against COVID-19 as cases surged, state media said, while in the coastal resort city where a new outbreak erupted in the Southeast Asian country, people fear a new lockdown will bring fresh pain to a struggling tourist industry.

Vietnamese health officials Tuesday announced 18 new cases of COVID-19—17 of which are related to a July 25th outbreak in the coastal resort city of Danang, bringing the country’s total cases to 670.

The figure stood at 546 on Friday when the country announced its first two coronavirus related deaths. Four more would lose their lives over the weekend, and two more on Tuesday, bringing to total to eight. Seven of the eight were from Danang, with one in neighboring Quang Nam province.

Vietnamese health officials on Tuesday explained that all eight deaths were a result of underlying medical conditions such as chronic kidney failure, hypertension, diabetes, and and the old age of the patients, with top medical advisor Nguyen Gia Binh quoted as saying the patients’ deaths seemed to be “inevitable” in state media.

Doctor Nguyen Trung Cap, Deputy Director of the hospital of Tropical Diseases in Hanoi, said the renewed pandemic has been spreading among three typical patient groups including those with end-stage chronic renal failure, cancer, and multi-organ dysfunction, particularly affecting the elderly.

Prior to the Danang outbreak Vietnam had gone 99 days without any new cases.

A country of 95 million, Vietnam attributes its relative success in tackling COVID-19 to effective contact tracing, strict quarantines, and early testing enforced by the government. Of the 642 confirmed cases, 374 have made full recoveries.

Since July 25, the number of cases in Vietnam has risen by 255, with most traceable to Danang. As of Monday, authorities linked cases in nine provinces and provincial level cities to the Danang outbreak, mostly in Danang and adjacent Quang Nam province, with single-digit cases in Ha Nam, Thai Binh, Quang Ngai, Dak Lak, and Dong Nai provinces, and in Hanoi and Ho Chi Minh cities.

Following the outbreak, several provinces have enacted social distancing orders, but as of Monday evening neither Hanoi nor Ho Chi Minh city have officially implemented such orders, though restrictions have been imposed on bars, discos and karaoke rooms.

Acting health minister Nguyen Thanh Long earlier said the virus that has spread from the outbreak is of a new strain—it infects others faster and spreads more rapidly.

According to the Vietnamese government, the economy had been growing at a steady rate prior to the pandemic, posting more than seven percent in the fourth quarter of 2019.

But by the second quarter of 2020, growth slowed to less than .4%, a figure the World Bank said was an exceptional rate for the pandemic, but Vietnam’s worst in 35 years, in a report published Tuesday local time.

According to that report, Vietnamese authorities estimated that over 30 million workers, or half the labor force, were affected by the lockdown, which caused unemployment rose to rise 33 percent in the second quarter.

While the World Bank praised Vietnam’s relative resilience, the report noted that “the economic shock has been unexpectedly large for a country used to recording full employment during the last two decades.”

The economic downturn has been especially ruinous for those in the tourism industry, and in the coastal resort city of Danang, residents fear another lockdown could spell disaster.

“The COVID-19 pandemic has heavily affected the social economy here in Danang, as people here mostly make their livings off of tourism,” Nguyen Van Thi, a resident of the city, told RFA’s Vietnamese Service.

“I have some motels and guesthouses but now tourists are leaving the city, which has caused a huge amount of damage to my family’s income,” said Nguyen.

Nguyen said he knows of many workers and business owners, including his son, who did not receive support through a fund set aside by the government to help those affected by the pandemic.

“Two things which the Vietnamese government should do right now are to test for COVID-19 and check the health of all of Danang’s residents and to disburse the 62 trillion dong [U.S. $2.7 billion] support package as soon as possible to help people to overcome this difficult time,” said Nguyen.

The government passed the support package in April. According to a report published in April by VNExpress International, it stipulated monthly allowances through June of about $77 for full-time workers who lost their jobs to the pandemic, and about $43 for part timers, with additional allowances for poor households and small businesses.