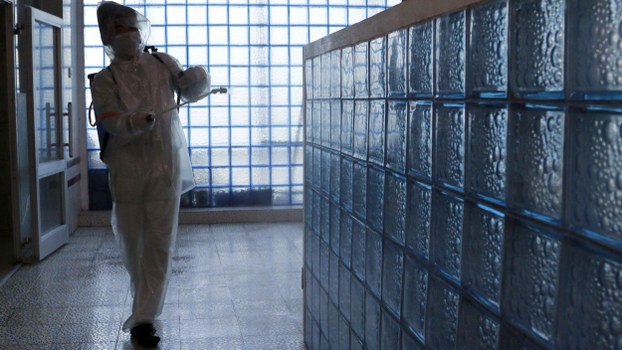 An employee wearing a protective gear disinfects to help curb the spread of the coronavirus at the Ryugyong Health Complex's public bath in Pyongyang, North Korea, Friday, July 31, 2020.

North Korean authorities have forced about 20 residents of the city of Kaesong to quarantine in Pyongyang, classifying them as suspected COVID-19 patients amid a national health emergency and the complete lockdown of the border city last month, sources in the country told RFA.

The national emergency was declared on July 26, a week after a man who had escaped to South Korea in 2017 swam back across the border in the vicinity of Kaesong, located within a 15-minute drive from the DMZ that divides the Korean peninsula.

North Korean authorities said the man had symptoms of COVID-19 and was the country’s first suspected coronavirus case.

The city of about 200,000 was put under a complete lockdown with no one allowed in or out. Other cities in North Korea were also blocked off, with travel between provinces halted, and quarantines imposed on anyone who had visited Kaesong.

“Between July 27 and 31, about 20 Kaesong residents were forcibly isolated by quarantine authorities, as they were classified as people with suspected COVID-19 infection,” a Pyongyang city official told RFA’s Korean Service on Monday.

“Even though [they] had already entered Pyongyang before the refugee crossed the Military Demarcation Line and came to Kaesong, the authorities imposed the compulsory quarantine measures on [them] simply because they came to Pyongyang from Kaesong,” said the source.

South Korean authorities confirmed last week that the escapee, surnamed Kim, had returned to North Korea by swimming across the border, but they could not confirm he had coronavirus symptoms.

At that time, they reported that according to the robust South Korean contact tracing system, Kim had not been in contact with anyone confirmed to be infected with the virus, had never undergone testing for it himself, and two people he had frequent contact with had tested negative.

Last week, RFA reported that North Korean residents were not accepting the government’s explanation that the returning exile was the real reason for the national emergency. The country still has not officially reported a single confirmed case according to World Health Organization statistics.

“The authorities are focusing all their effort on the coronavirus quarantine project in Pyongyang these days. However, they never let us know how many confirmed COVID-19 cases there are in Pyongyang or if any have recovered,” the source said.

Another source, a Pyongyang resident who requested anonymity for security reasons, confirmed to RFA that the city was isolating Kaesong residents.

“It has been reported that they only check the temperature of the Kaesong residents once a day and just keep them locked up without any countermeasures,” said the second source.

“Currently, the people in Kaesong are completely cut off from the outside world, so there are many difficulties, such as buying food and medicine. But the government is not guaranteeing [them] needed supplies,” the second source said.

“They only instruct them to carry out the quarantine in accordance to [government] standards,” the second source added.

The second source criticized lack of clear information about the coronavirus and accused the government of using the refugee’s return for political aims.

“Authorities have never told us that there are confirmed COVID-19 patients or people with symptoms in North Korea. But after the incident of the re-entry of the North Korean refugee, they are exaggerating the situation in Kaesong with the intent to instill antipathy against South Korea, stroking fear among residents here in the North.

“The authorities set [them] up for whatever reason, to propagate as if the North Korean refugee had returned to North Korea with coronavirus and caused great damage to our country,” the source said.

North Korea blew up an inter-Korean liaison office in Kaesong and cut off official communications with South Korea, citing Seoul’s inability to rein in on the balloon launches. The government also forced residents to attend rallies that denounced the exiles as treasonous defectors.

Experts say that the ire over the exiles is an excuse for Pyongyang’s provocations, intended to extract concessions from the U.S. and South Korea in negotiations over North Korean denuclearization.

More than 30,000 North Korean refugees have settled in South Korea over the years.