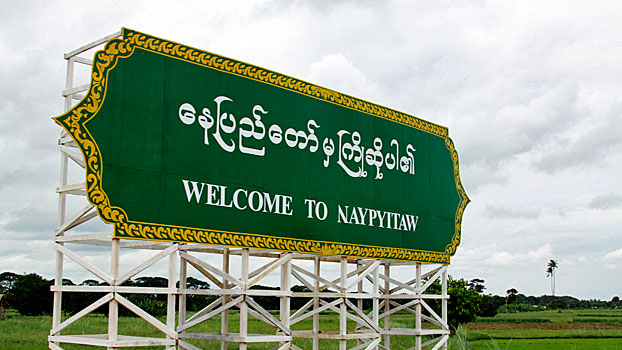 A sign welcomes visitors to Myanmar's capital Naypyidaw in a file photo.
Reuters

Western governments have warned their citizens in Myanmar to exercise extreme caution in major cities in the Southeast Asian nation amid social media reports of alleged bomb threats by ethnic armed groups operating in the wake of a temporary cease-fire collapse.

The U.S. Embassy in Yangon on Wednesday issued an alert to notify American citizens that Myanmar security forces are investigating reports of potential attacks in the capital Naypyidaw on Sept. 26, Oct. 16, and Oct. 26, and in Naypyidaw, Yangon, and Mandalay in the coming months.

The alert advises U.S. citizens to increase their security awareness, especially when interacting with security forces and at government facilities, and to monitor local media for updates.

“No specific measures are recommended at this time,” a notice posted online by the British government said. “When traveling anywhere in Myanmar, you should monitor the latest developments, continue to remain vigilant, take sensible precautions, avoid large demonstrations or gatherings, and follow the advice of the local security forces.”

The Myanmar government has not corroborated the information about the potential attacks, the notice said.

The Canadian government echoed the warning about uncorroborated reports of a potential bomb attack in Naypyidaw on Sept. 26, Oct. 16, or Oct. 26.

“The security situation could deteriorate suddenly and unexpectedly,” the Canadian government warned in light of Aug. 15 attacks by a trio of ethnic armies in various locations in war-ravaged northern Shan state and in central Myanmar’s Mandalay region that disrupted road and rail connections.

The Australian government has advised its citizens in Myanmar to stay away from northern Shan state due to increased fighting between ethnic groups and military forces and to avoid travel to areas bordering Bangladesh, the northern Rakhine state townships of Maungdaw, Buthidaung, Rathedaung, Kyauktaw, Ponnagyun, Mrauk-U, Minbya, Myebon, and Ann, and southern Chin state’s Paletwa township because of armed conflict there.

“Our overall level of advice has not changed — exercise a high degree of caution in Myanmar,” said an alert the Australian government posted Monday on its website.

Armed conflict has raged for most of this year between three rebel armies — the Arakan Army (AA), the Ta’ang National Liberation Army (TNLA), and the Myanmar National Democratic Alliance Army (MNDAA) — and government forces in northern Shan state, and between the AA and the Myanmar military in Rakhine state.

The warnings by foreign governments come in the wake of a failed temporary truce called by the trio of ethnic armies, which call themselves the Brotherhood Alliance, during weekend fighting in northern Shan and Rakhine states, and the expiration of a unilateral cease-fire by the Myanmar military on Sept. 21.

Western governments raised the alarm following the online circulation of a letter issued by the Myanmar government in mid-September that identified Sept. 16 and 26 and Oct. 16 as dates of potential bomb attacks on the President’s Office, ministerial buildings, and other government departments in the capital Naypyidaw.

It also said that members of the ethnic forces decided to proceed with the bombing plan when they met in northern Thailand’s Mae Hong Son province on Aug. 30.

Thein Zaw, director general of Myanmar’s Ministry of Construction, told RFA he received a copy of the letter sent by the President’s Office with the office’s official seal.

Military spokesman Brigadier General Zaw Min Tun said the leak of the classified letter would lead to unwanted problems and that authorities are working on tightening security in Naypyidaw.

All ethnic armed groups have denied reports that they are planning to bomb government buildings in Naypyidaw.

“Far from using terrorism, we are currently trying to stop the fighting through negotiations,” he told RFA’s Myanmar Service.

“I want to make it clear that, first, we don’t have any policy to use terrorist means for any reason, and second, we don’t condone any KNU subsidiary groups using such methods,” he added.

Padoh Ta Doh Moo said that the KNU will send a letter of objection about the matter to Myanmar’s National Reconciliation and Peace Center, whose peace commission leads all peace process negotiations.

KIA spokesman Colonel Naw Bu rejected the bomb alert and said that the leaked memo would present an obstacle to the trust-building efforts between the ethnic armies and Myanmar forces.

“The spreading of this kind of news hinders trust-building between parties. Whoever did this — it was the wrong move,” he said.

RFA could not reach AA spokesman Khine Thukha for comment.

CNF general secretary Shwe Khar said his ethnic organization was not aware of the leaked memo.

“We are not aware of this issue, neither did we contribute to it,” he told RFA.

“They [the government] should have confirmed it with us first,” he said, adding that such classified letters are distributed only internally.

“So it’s wrong that the letter has been widely circulated outside,” Shwe Khar said. “I assume its intent might be to damage the reputations of the CNF and other ethnic armed groups.”