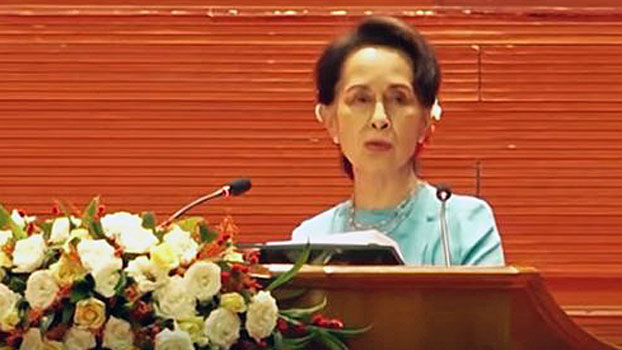 Myanmar’s leader Aung San Suu Kyi and its powerful military chief traded blame Wednesday for four years of fruitless efforts to end the country’s long-running civil wars, airing contrasting views within the government as it opened peace talks with 10 ethnic armies in the capital in Naypyidaw.

The fourth round of Union Peace Conference peace talks since Aung San Suu Kyi took power in 2016 pledging to end conflicts with dozens of ethnic armed organizations (EAOs) that began right after the then Burma’s independence from Britain in 1948, comes 11 weeks before general elections in November.

Hopes dimmed last week when an alliance of the largest and most powerful ethnic armies, several of which are involved in active conflicts, announced it would skip the Aug. 19-21 talks, staying outside the peace process as they have since rejecting the previous government’s nationwide cease-fire accord (NCA).

Aung San Suu Kyi opened the session Wednesday calling for an end to pursuing the political goal of peace solely through the use of armed force.

“We aim to end the concept and the root causes of it, in which only the ones with military might, armed forces, or armed power will succeed, gain respect, and be given a role or taken seriously by others,” she told a gathering of 230 government officials, lawmakers, government and ethnic army soldiers, and NGO activists.

“We can say we fulfilled the duties for peace only if we achieve this goal. Enduring peace can be achieved only by eliminating the roots and motivators that have led to this corrupt political custom,” said Aung San Suu Kyi, who serves as chairwoman of the government’s National Reconciliation and Peace Center, as well as state counselor and foreign minister.

In his opening remarks, Senior General  Min Aung Hlaing, the commander-in-chief of the defense forces, rejected the notion that the military — which ruled the country from 1962 to 2015 and controls the ministries of defense, border affairs, and home affairs — was solely responsible for armed conflict.

He did not directly address Aung San Suu Kyi’s oblique remarks, directing his criticism at the ethnic armies.

“I would like to say that it is dishonest to drive the current peace process based on ideologies and concepts of the 1950s,” he added in a reference to conflicts that erupted in first decade after independence, some of which involved communist-led insurgencies.

Min Aung Hlaing is the most senior Myanmar general facing possible referral to the International Criminal Court for prosecution on genocide-related charges over a scorched-earth military campaign in 2017 that forced more than 740,000 ethnic Rohingya Muslims to flee into Bangladesh. He is also under U.S. and British sanctions. 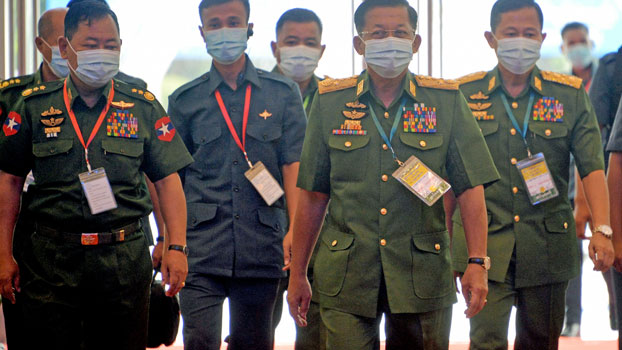 “He was asserting that the civil war and ongoing armed conflicts are caused by us, the ethnic groups,” he told RFA’s Myanmar Service. “The truth is we have been demanding our rights through democratic means, but they didn’t resolve the problems and tried to persecute us by force.”

Ethnic armies turned to insurgencies as a last resort in their demands for ethnic minority equality, Nai Han Thar added.

Sai Nyunt Lwin, vice chairman of Shan Nationalities League for Democracy (SNLD) and leader of the United Nationalities Alliance, also said that the lack of equality and rights for ethnic minorities are what has kept the wars going in northern Shan state and other conflict zones in the multiethnic nation of 54 million people.

“Had we had these rights, the conflicts would not have been prolonged for the past 70 years,” he said.

“Those who started the armed revolution in their 20s are still fighting for the cause in their 90s,” he said. “The new recruits are taking over and continuing these fights only because equal rights have not been achieved.”

Aung San Suu Kyi acknowledged that a lack of trust among the parties meant that they could not agree the very basic terms such as state-level constitutions to be included in a treaty to be signed during the summit.

But she urged all stakeholders at the meeting, also known as the 21st-Century Panglong Conference, to work towards creating a democratic federal union.

The first Panglong talks were convened in 1947 by her father, independence leader Aung San, but the deal on a union struck with major ethnic groups, who were part of the British colony but wary of joining Burma, unraveled within a year, spawning wars over autonomy, territory, and resources that rage on today.

Earlier this month, the Myanmar government excluded the Arakan Army (AA) from the peace conference, because the rebel force has been at war in Rakhine state since December 2018.

In March, the government declared the AA an illegal association and terrorist group.

In response to the AA’s exclusion, the seven members of the Federal Political Negotiation and Consultative Committee, led by the United Wa State Army (UWSA), said they would skip the summit.