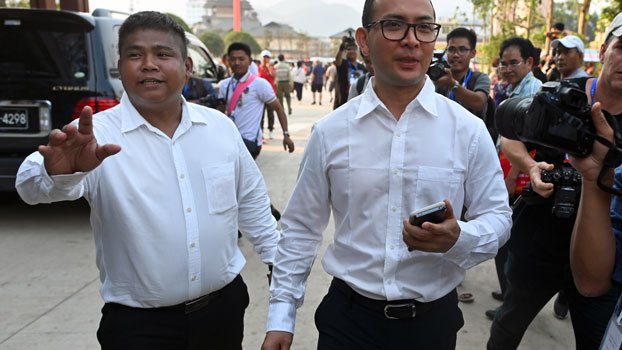 The leader of the rebel Arakan Army has accused the Myanmar government of exploiting a surge in coronavirus cases to expand the military presence and tighten travel restrictions in conflict-ridden Rakhine state, causing more civilian suffering.

In a prerecorded video, AA chief Major General Tun Myat Naing said officials have taken advantage of the health crisis to deploy more troops in active conflict zones and that civilians are being arbitrarily detained, tortured, and killed amid the COVID-19 pandemic.

Myanmar troops and the AA have engaged in a 21-month-long war in the western state, where the rebel group is fighting for greater autonomy for ethnic Rakhine people. The Myanmar government has branded the AA an illegal association and terrorist group.

Myanmar recorded 1,111 confirmed COVID-19 cases on Thursday, including 116 new cases, while the number of fatalities remained at six. Rakhine state has seen the highest number of infections at almost 500.

“We have seen more restrictions as the COVID-19 outbreak becomes widespread in Rakhine state,” said Tun Myat Naing in the video released Wednesday.

“We can accept if it is because of the pandemic, but the Myanmar army has been moving massive amounts of troops with aircraft and navy ships,” he said, adding that more than 600 army soldiers entered the state on Wednesday alone via the Arakan Mountains.

Tun Myat Naing also noted that as of mid-August several villagers had been injured or killed by light and heavy artillery fire by Myanmar soldiers in Rathedaung township, while others had been shot in Kyauktaw and Ponnagyun townships.

They are among the 283 civilians killed and 627 injured in hostilities since December 2018, according to an RFA tally. Roughly 200,000 others have fled their homes amid the fighting and now live in official or makeshift displacement camps.

Four civilians have been killed and 20 injured in mortar shellings and shootings since Aug. 16.

‘No reason to exploit’

Responding to Tun Myat Naing’s comments, Myanmar military spokesman Major General Zaw Min Tun said the government army has been fighting the AA in the state but not building up its forces.

“We are just conducting antiterrorism operations in Rakhine state,” he said. “We are using forces as needed. We did not increase the forces.”

Soldiers are only detaining and interrogating villagers suspected of “terrorist” activities and colluding with the enemy, he added.

“As for the COVID-19 pandemic, we’ve provided equipment and material four times to Rakhine state via aircraft,” he said. “There is no reason to exploit the situation. Instead we are operating without discrimination.”

One Rakhine resident who declined to give his name for fear of his safety said the Myanmar Army has continued its operations as usual in combat areas with heavy weapons fire, the arrests of civilians, and steady casualty numbers.

Both the AA and civilians have accused Myanmar soldiers of intentionally shooting ethnic Rakhines, though the military has denied it.

Villagers injured during the clashes have reported that they have not been able to get to hospitals and clinics for treatment because of travel restrictions and a nighttime curfew imposed as measures to contain the spread of the virus.

Others say military roadblocks have prevented them from reaching medical facilities when necessary and from leaving their communities to buy rice and other essential items.

Government spokesman Zaw Htay told RFA that he would respond to the AA’s accusations during a news conference in Naypyidaw on Friday. The Myanmar military’s information team is also expected to address the media that day.

The AA and two other ethnic armies — the Ta’ang National Liberation Army (TNLA) and the Myanmar National Democratic Alliance Army (MNDAA) — said Wednesday that they would extend a temporary unilateral cease-fire until early November, as a contribution to peace efforts and to allow for voting in general elections.

The trio of ethnic armies, known as the Brotherhood Alliance, first announced the temporary truce in 2019 and have renewed it several times. They adhere to the cease-fire as long as the Myanmar military does not fire on them first.

The renewed truce runs from September 1 to Nov. 9, the day after Myanmar’s general elections.

In June, the government military rejected a proposal by the three ethnic armies to begin cease-fire talks in a bid to kick-start the country’s stalled peace process, instead vowing further retaliation for armed offensives and ambushes.

Political and military analyst Maung Maung Soe warned that the ethnic armies and the government military must agree to bilateral truces to end the fighting.

“If there is no cease-fire agreement, more accusations and more fighting will come,” he told RFA. “The unilateral cease-fire is not working, and both sides need a bilateral agreement.”