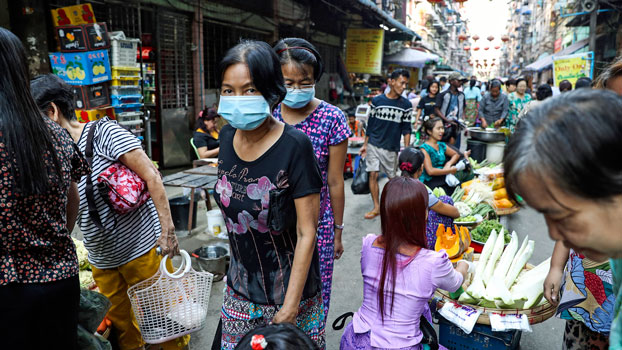 Myanmar has locked down a village in Chin state where the country’s first confirmed coronavirus patient had stayed, while a second person who has tested positive was moved to an infectious disease hospital in Yangon, health authorities and a local lawmaker said Tuesday.

The first confirmed case was a man traveling back from United States, who reported feeling ill six days after his arrival in Myanmar, the government said.

The second confirmed case was a traveler from England who suspected that he had contracted the virus from someone at an official meeting he attended.  He is being treated treated in Yangon’s Waibargi North Okkalapa Hospital.

A regional government minister who had contact with him has been ordered to remain in quarantine for 14 days, authorities said.

Health authorities have reported both patients appear to be in good condition but are still being monitored.

A day after the government declared the country’s first two confirmed cases of COVID-19 infections, Chin state parliament chairman Zo Bwe announced that communications have been cut with a village in Tedim township where one of the infected persons hosted a party.

Those who have been in contact with the man are considered potential virus carriers and are being monitored, he said. Authorities are also monitoring motor vehicle drivers in the area.

With movement in and out of the area grounded to a halt, prices of basic necessities have already shot up.

“In Tedim township, which the coronavirus patient visited, the price of rice has increased drastically and people are facing hardships with shops closing suddenly,” said C. S. Mong, who works with a local civil society organization.

But Pau Lun Min Thang, Chin state’s minister for social affairs, reassured the public about the availability of goods.

“The government has plans to continue to have most essential items available to avoid scarcity,” he said.

Also on Tuesday, Myanmar’s Ministry of Foreign Affairs issued further precautions to limit the spread of the virus by requiring all Myanmar nationals and foreigners traveling to the country to spend 14 days in a quarantine facility upon arrival, beginning Wednesday.

Foreign nationals, including diplomats and United Nations personnel working in Myanmar, must also present laboratory evidence of the absence of COVID-19 infections issued no more than three days prior to their travel date before heading to the country, the ministry’s statement said. Diplomats and U.N. employees are subject to two weeks of home quarantine.

Meanwhile, authorities in the central Myanmar city of Mandalay on Tuesday placed restrictions on visitors, and ordered shops to close and restaurants to only accept carry-out orders, following the two confirmed COVID-19 cases.

They also locked down the compound of Mandalay Palace, called Mya Nan San Kyaw Palace in Burmese, and have forbidden members of the military and their families from leaving the area except for emergencies.

Soldiers are checking the body temperatures of those who need to enter the compound and are requiring them to wash their hands.

“People around the country visit Mya Nan San Kyaw Palace all the time,” said Colonel Soe Kyi Khin, spokesman for the Central Region military headquarters. “We have restricted visitors because two people in the country have tested positive.”

“It is not a total lockdown,” he added. “We will reopen when the number of virus cases begins to decrease.”

“The Mandalay regional government issued an order for the jewelry market to close by March 26, but we are closing it before then because of the two people who tested positive [for the coronavirus],” said Kyaw Kyaw Oo, a merchant in Mandalay city’s Gems and Jewelry Trading Center where many Chinese visitors shop.

“We are trying not have groups of people in the market,” he said.

Another seven people are still being monitored, she added.

According to Myanmar’s Ministry of Health and Sports, 212 people in all are under observation for suspected coronavirus infections.

As of Tuesday, there were nearly 417,000 confirmed coronavirus cases worldwide with almost 18,600 deaths.