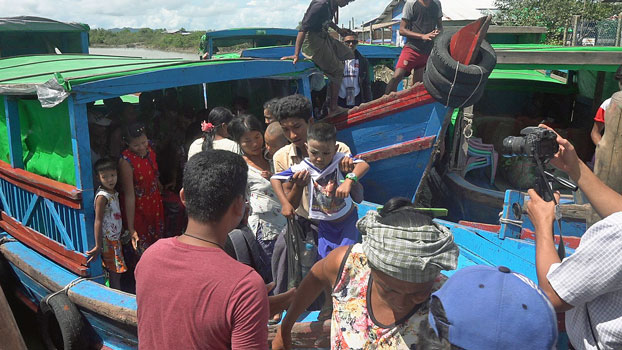 Villagers who fled their communities amid armed conflict in Maungdaw township disembark from a boat in Sittwe, capital of western Myanmar's Rakhine state, July 15, 2020.
RFA

More than 3,000 civilians have fled villages in the far north of Myanmar’s conflict-ridden Rakhine state after three days of heavy fighting between government forces and the rebel Arakan Army that killed one villager and injured three others, a relief worker said Thursday.

The refugees from Rathedaung and Maungdaw townships join a tide of around 200,000 civilians living in Buddhist monasteries and crowded camps after being displaced by the armed conflict in Rakhine state since late 2018, according to the Rakhine Ethnics Congress, a Myanmar NGO.

Fresh fighting between the two armies began on July 12 near Rathedaung’s Koe Tan Kauk village and Chain Khar Lain village, and in Maungdaw’s Sar Ngan Chaung village. Combat raged until July 14, the day on which the civilians were killed and injured, local relief workers said.

“Some people fled to Maungdaw, and some villagers fled to Rathedaung and Buthidaung. Some fled all the way to Sittwe. In total, there were around 3,000 people,” said Kyaw Min Khaing, a volunteer who is assisting the displaced civilians in Rakhine state's capital Sittwe.

“More people are arriving today. Some will arrive tomorrow. Many local villagers who have been dispersed during the fighting are now gathering inside IDP [internally displaced persons] camps,” he said.

Rathedaung and Maungdaw, coastal districts on the Bay of Bengal, have been torn by conflict since nearly three years ago when the Myanmar Army responded to an attack on border guard posts by a militant group with a scorched-earth campaign that drove more than 740,000 Rohingya Muslims across the nearby border and into Bangladesh.

The Myanmar military’s information team said in a Facebook post on Thursday that AA soldiers stationed around three villages in Rathedaung township were “using villagers as human shields” to commit terrorist acts and to block lines of communication in the area.

“Today, military columns started launching a ‘counter-terrorism operation’ against the AA insurgents around that area to reopen the communication lines and to rescue the villagers,” it said.

AA spokesman Khine Thukha said gunfire by the Myanmar military amid the fighting killed a civilian in Chain Khar Lain village, and that the hostilities continued into Thursday with government soldiers using heavy artillery near Kyauktan village.

The AA seeks autonomy for ethnic Rakhines in the state. Formed in 2009 with an estimated 8,000 fighters last year, the AA was declared an illegal association and terrorist organization by the government in March.

The IDPs who fled to Sittwe are being housed at Buddhist monasteries and must rely on donors for food, the volunteers said. 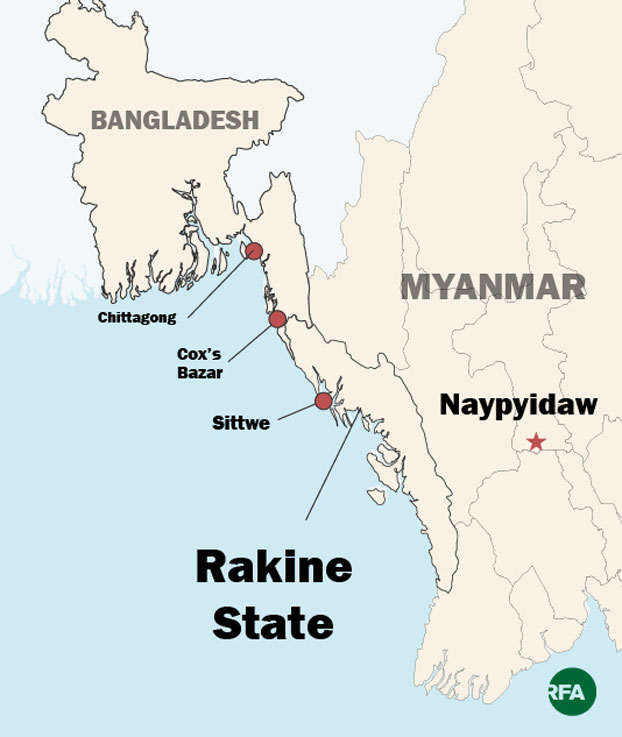 Aye Hlaing Chey, who left her home in Aung Thukha village, said Myanmar troops passed near her village every two or three days.

“They are very inhumane,” she told RFA. “When they entered the village, they fired their guns, and we didn’t have any weapons to resist them.”

“We could barely find a meal to support ourselves, so in the end, we decided to flee our homes,” she added.

Residents said some people left Aung Thukha village because the border police had threatened to burn the houses of those who tried to return after fleeing.

Villager Khine Win, who has an adolescent son and daughter, said she left her home because she feared that soldiers would torture civilians who live there.

“I don’t care about what they are fighting for, but I was concerned that they would have caused trouble for us or torture us if they entered the village,” she told RFA. “We fled on account of these fears.”

Khine Than Aye, who is now in Sittwe after leaving the same village, said she fears for the safety of her husband who was left behind.

“The officers in the village told my husband over the phone that he should not leave,” she said. “If he does, our house will be seized, and we will never be able to return home.”

Fighting continues to rage despite a temporary unilateral cease-fire that the AA set until the end of August because Myanmar forces had launched the offensives, he added.

In southern Rakhine state, meanwhile, as many as 3,000 displaced villagers who have sought refuge in urban Ann township have been forced to rent houses there because camps are full, people assisting the villagers said Thursday.

About 1,500 other IDPs are staying temporarily in two now full displacement camps sent up by the government to handle the influx of civilians who fled their homes 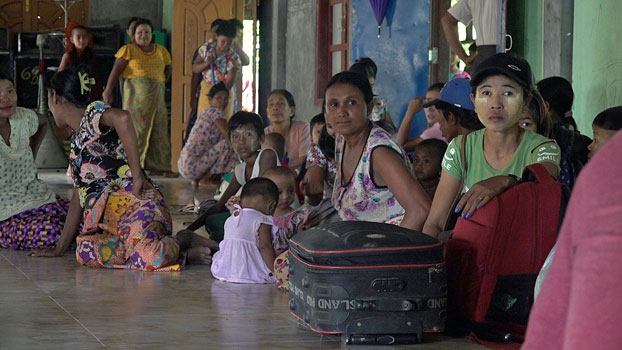 Villagers who fled their communities amid armed conflict in Maungdaw township sit on the floor of a Buddhist monastery in which they took shelter in Sittwe, capital of western Myanmar's Rakhine state, July 15, 2020. Credit: RFA

Scramble for food outside camps

Myo Lwin, a volunteer helping IDPs in Ann, said people who live outside official IDP camps are not receiving any aid and have been left on their own to find food and lodging.

“Many of them don’t get any assistance,” he told RFA. “Some IDPs must rent land plots to build makeshift shelters. Not all of them have safe access to a latrine. Many of them have fled with nothing but their clothes.”

“In government-run IDP camps, people will get regular meals at least,” said Soe Thein, the administrator of IDP camp No. 2 in Ann town.

“Those outside are living without any donors to give them cash and food,” he added.

Win Zaw, who fled with his family from Chaung Wa village to Ann town, said that IDPs face shortages of both food and materials to build temporary shelters.

“We are trying to build a makeshift home, but there is a shortage of materials such as bamboo and thatch roofing,” he added.

The Myanmar Army has restricted the transport of rice — Myanmar’s staple food — in more than 40 villages into Rakhine’s Ann township township since January in an effort to cut off vital supplies to the AA.

Residents of at least 18 of the 48 communities in Ann township’s Dalat Chaung village tract had fled their homes due to the fighting and to food shortages, aid workers said.

Win Myint, Rakhine state’s spokesman and minister of municipal affairs, said it is very challenging for the government to provide assistance for IDPs who do not live in camps.

But he added: “We may able to provide some assistance depending on their needs. We could build makeshift shelters for them.”

According to the Rakhine Ethnics Congress, 194 civilians have been killed during the 19-month conflict.