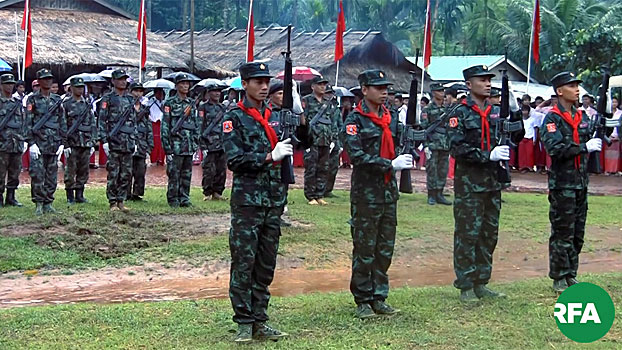 Soldiers from the Mon National Liberation Army participate in a military drill at a base in southeastern Myanmar's Mon state in an undated photo.
RFA

Myanmar military officers held talks on Thursday with ethnic Mon rebels in a bid to ease tensions at a village on the country’s border with Thailand, where more than 1,000 residents have sought shelter in monasteries and rubber plantations amid recent hostilities between the two sides, people with knowledge of the situation said.

The village sits in territory controlled by an ethnic armed group, the New Mon State Party (NMSP), whose military wing, the Mon National Liberation Army (MNLA), has fought against Myanmar forces since 1949 under various names.

In February 2018, the NMSP signed the government’s nationwide cease-fire agreement (NCA), ending its long-running war with Myanmar forces. The pact stipulates that military troops cannot enter territory controlled by an ethnic armed group without prior permission.

NMSP chairman Nai Hanthar said ethnic Mon forces have been negotiating with the military battalion to order remaining soldiers to leave its outpost near the village in the Three Pagodas Pass on the border between Kayin state and Thailand.

“We have negotiated with the military leaders in Mawlamyine,” he said, referring to Mon state’s capital city.

“The government military troops have withdrawn from our camps, but they are not entirely out of the village,” he said. “They are still near the village. We will keep negotiating to secure a deal.”

The Myanmar military contacted the NMSP’s public relations office on Nov. 25 to inform the party that soldiers needed to visit the area, Nai Hanthar said.

The party’s central executive committee granted permission for the visit as long as soldiers wore civilian clothing, he said.

The government soldiers later returned with the members of the Kayin Border Guard Force to attack the Mon forces.

A Myanmar military tactical operation commander, an unknown number of other soldiers, and a civilian were injured during  the clashes, said Nai Kasaut Mon from the Mon Human Rights Foundation.

The wounded civilian, Khin Maung Win, was taken to Kanchanaburi Hospital, while NMSP troops retreated from the stronger military forces, he added. 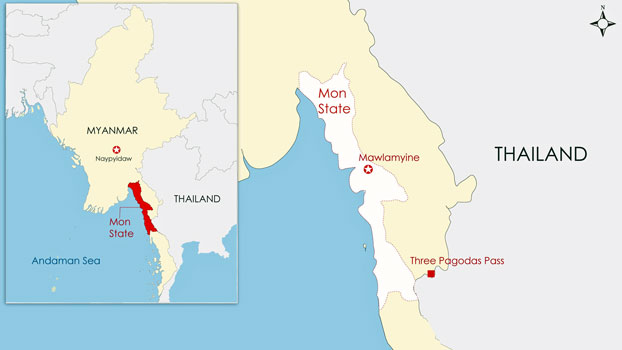 ‘Not an irreconcilable problem’

Nai Hanthar told RFA’s Myanmar Service that Myanmar soldiers were at fault for entering Mon territory in their uniforms.

An NMSP soldier on guard at a security gate shot two or three Myanmar troops, prompting the armed hostilities and the subsequent retreat, he said.

“Afterwards, the rest of the military troops advanced and captured our camp,” he said. “They demanded that we hand over the soldier who shot at them. The young soldier had responded to an order from top commanders, so I don’t think it is his mistake that he shot the intruders who came in without permission.”

“They shot at us first, and that triggered the clashes,” he said. “We had already informed them about our troops’ visit. They must have had a reason to start shooting at us.”

“I don’t want to discuss it in detail,” he added. “Anyway, this is not an irreconcilable problem.”

The hostilities drove nearly 1,000 villagers from Palanjapan, Kyandaw, and Mon Battalion 3 villages and into Thailand.

Nai Kasaut Mon noted that under a 2012 bilateral cease-fire between the NMSP and the Myanmar government, both the administration and its military recognized that the area up to five miles around Palanjapan village was Mon-controlled territory.

“The people who have fled their homes are not just from Palanjapan village, but they are also from other nearby villages,” he said.

In response, Brigadier General Zaw Min Tun said that people who live in the villages have been crisscrossing the border on a daily basis with border passes.

“They fled there because there’s better transportation infrastructure on that side,” he said. “When the situation becomes stable, they will return.”

Though the fighting has ended, Myanmar soldiers are still patrolling the area 300 yards from Palanjapan village, while NMSP troops are also maintaining a presence close to the community.

More than 700 civilians who have fled the three villages are staying at Meethwepho Monastery in western Thailand’s Kanchanaburi province, while the remainder have taken shelter at rubber plantations and in other Buddhist monasteries, said Abbot Zargara of Meethwepho Monastery.

“There are around 720 people in my monastery alone,” he told RFA. “There could be a few hundred more in other monasteries.”

Abbot Zargara added that his monastery depends on private donations from local citizens to provide food for the displaced civilians.

“People of many different ethnic groups live in this area, including Mon, Karen, Bamar, and Shan,” he said. “Many came as migrant workers. We are giving shelter to everyone regardless of race or religion.”

Others from the villages are in hiding or have stayed behind to guard homes and property, he said.

“Thai authorities are safeguarding these IDPs [internally displaced persons] as a responsibility,” Abbot Zargara said. “They will let these people stay, and if they want to return home, they won’t stop them. But as long as they are here, they have the responsibility to safeguard them.”