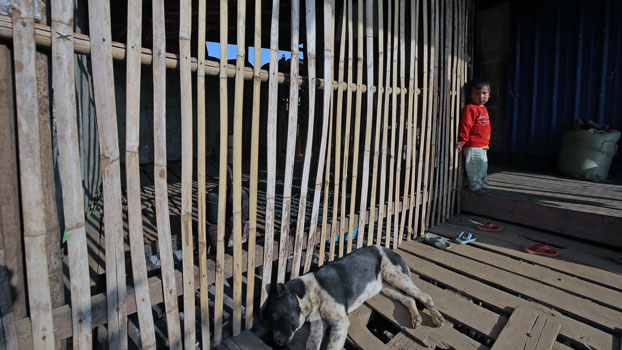 A boy stands at his wooden house in a village in western Myanmar's Chin state, March 3, 2020.
AFP

Twenty civilians from Chin state have gone missing between 2018 and 2020, with five of them allegedly abducted by Arakan Army rebels amid a 20-month conflict with Myanmar forces in adjacent Rakhine state, Chin civil society groups said Tuesday.

The Arakan Army (AA), which is fighting for greater autonomy for the ethnic Rakhine people, claims both Rakhine state and Paletwa township in the hill tracts of Chin state to the north, as territories ruled by Arakan kings centuries ago in Myanmar’s westernmost state.

“We’ve got at least 20 people missing, [and] at least five of them were being detained by the AA,” said Salai Kyaw Aung, secretary of the Chin IDP Support Committee (CISC), which advocates for displaced Chin civilians in Paletwa and in Chin-inhabited areas of Rakhine state.

“For the remaining 15, their family members might know who abducted them, but for our committee, it is difficult to say who abducted them without any evidence,” he said, adding that the CISC cannot provide an accurate number of missing or abducted Chin civilians.

All the missing persons and abducted persons are males, and a dozen of them are younger than 35, Salai Kyaw Aung said.

The CISC said on Aug. 1 that the AA abducted Myint Maung from Paletwa on April 12 and four young men from the township on July 29.

A family member of Salai Soe Aung, one of the abducted young men, said his family is seriously concerned about him since he disappeared while returning from a trip to Yangon with friends.

“We don’t know the details,” the relative said. “We have not had contact with him since then. We want him to be released because we know he is innocent. His parents and family members are concerned about him.”

RFA was unable to contact the relatives of others who are missing because of telecommunications problems in the areas. The Myanmar government has cut off mobile internet service to Paletwa and seven townships in Rakhine, citing security concerns amid the armed conflict.

The Khumi Affairs Coordination Council (KACC) announced on July 30 that the AA had abducted four young Chin men on the border area between Rakhine’s Kyauktaw township and Paletwa.

“There are more incidents of people missing or being abducted after the armed conflicts,” said KACC spokesperson Main Nan Wai. “These 20 people are the number we have been able to record. There could be many more cases that we have not recorded.”

Both the AA and the Myanmar military have denied that they have detained the missing persons, Mai Nan Wai said.

“These young people did have not connections to the military, so we would like to issue an appeal that they be released as soon as possible,” the spokesperson said.

In previous cases, both the Myanmar military and the AA have blamed each other for the arbitrary arrest and detention of civilians suspected of aiding the enemy.

Myanmar military spokesman Brigadier General Zaw Min Tun said soldiers had not found anyone claimed to be missing or abducted from the Paletwa area.

“Some missing people might have been abducted by AA troops,” he said, but noted that most civilians in Paletwa do not support insurgent groups.

“They are not supporting terrorist acts, so it would be very rare for the military to detain and interrogate Chin civilians,” Zaw Min Tun added.

Myanmar forces will help the families try to find their missing relatives if they request assistance, he said.

“It is very horrible that they are missing without a trace,” said Salai Tay Ya, director of the Chin Human Rights Organization (CHRO).

“I want the armed groups to release them as soon as possible if they have detained them,” he said. “I also would like to appeal to the military and to the AA to avoid arbitrary detentions in the future.”

Fighting between the Myanmar military and the AA has left dozens of civilians dead and displaced about 200,000 others. About 7,000 civilians have been displaced in Chin’s Paletwa township.

In one of the latest incidents, the body of missing Chin civilian Hla Kyaw, the 62-year-old head of Paletwa’s Ton Ma Wa village, was discovered on July 17, according to a July statement issued by the CHRO.

Hla Kyaw had been missing since June 5 after witnesses confirmed that the AA had abducted him while he was on his way to the Pyichaung area in search of rice.

Twelve civilians from Paletwa Township remain missing and 48 others have been killed since the larger conflict between the Myanmar military and the AA began in 2015, the CHRO said.