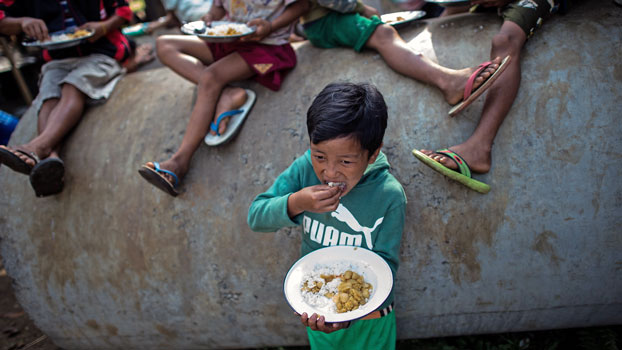 Two townships in northern Myanmar’s Kachin state face shortages of food staples, including rice, and rising prices, after China shut down border checkpoints in an effort to contain its coronavirus outbreak, a local lawmaker said Tuesday.

More than 20,000 residents of Chipwi and Hsawlaw townships will face shortages from now until China opens the border crossings, closed until the annual monsoon season begins in late May, said Khaw Marwu, a legislator from the Lisu National Development Party who represents the Hsawlaw constituency.

The two cold, mountainous regions along with Kawnglanghpu township lie in remote areas that are difficult to access as roads are rare, he said. Residents earn their living by farming, hunting, and selling forestry products.

The Myanmar military and a number of armed groups are present in the region, including the rebel Kachin Independence Army (KIA); the National Democratic Army-Kachin (NDA-K), an armed group that was converted into a Border Guard Force under Myanmar military command; and the Lisu and Rawang militias.

Now the impact of the spread of the highly contagious coronavirus, officially known as COVID-19, on top of the border closures have led to food shortages in the area, he added.

“All the residents of Hsawlaw and most of the ones in Chipwi rely on rice imports from China,” Khaw Marwu said. “And it is very difficult to transport goods from Myanmar, because the border gates are now all closed on account of the coronavirus outbreak. It has stopped the transport of both rice and passengers.”

“The residents of my constituency are facing shortages of food supplies,” he added

Khaung Joon, a pastor from the border town of Hsawlaw, said several border crossings have been closed, including those at Phimaw and Panwar, and gates Nos. 6, 7, and 8.

“Some residents who are visiting the other side of the border are now stranded,” he told RFA’s Myanmar Service. “The military has restricted the transport of rice and fuel oil, though some people recently have begun to trade these commodities along with others.”

Khaw Marwu said the government has restricted the transport of rice and fuel oil in the area for the past two years because of the armed conflict between Myanmar forces and the KIA, but it has allowed the delivery of 1,050 bags of rice as requested by the state’s chief minister.

“They restricted the sale of rice in the area because it is part of the ‘four-cuts’ strategy,” he said, referring to a Myanmar military counterinsurgency tactic designed to deny armed opposition groups access to food, money, information, and recruits.

“As the chief minister requested, they allowed the transport of the 1,050 bags of rice,” he said. “But people in the remote areas are still trying to survive on food they can find in the jungle.”

Khaw Marwu said he is trying to secure additional bags of rice from mills on credit from Myitkyina and Waingmaw townships to send to the Hsawlaw area.

The regional military commander of Hsawlaw’s No. 1 area told the lawmaker that Myanmar forces have been assisting in the food-delivery efforts by helping to transport rice and other items.

“We will be totally cut off and face shortages of rice into the monsoon period,” he said.

“Those who are farmers have some rice supplies from their own farms but just enough for themselves,” he said.

Now that the government has given permission to transport the rice, shipment can be delivered while the roads are still accessible, Khaung Joon said.

“But around April when it starts raining, all the roadways will be cut off, and if the border crossings are still closed, it will be unimaginable how people in these areas will survive,” he said.

Myanmar’s Ministry of Health and Sports warned on Feb. 23 that the country was at risk of a coronavirus outbreak and advised people to avoid large gatherings, the online journal The Irrawaddy reported, amid rising death tolls inside and outside China, where the virus originated.

More than 2,660 people in China have died, with the number of confirmed infections there hitting more than 77,600.

So far, no COVID-19 cases have been found in Myanmar, according to the ministry.